Later this month, some new tech is going to be on the road where Tesla will never go.

It is kind of a shame too, considering how beautiful the vistas are… 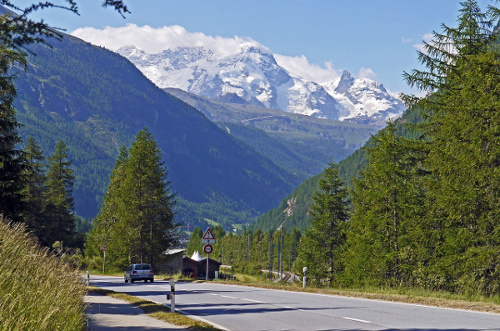 A new breed of trucks will be making deliveries through the Swiss Alps.

As these 50 new 18-tonne H2 Xcient trucks from Hyundai get rolling, it will also illustrate a fact that Tesla doesn’t want its investors to realize: No matter what it does, its vehicles will never be suitable for a huge swath of transportation.

The simple fact is that battery-driven cars need to drive around a whole lot of batteries. There is little capacity to haul around anything else.

That is why, even with the high energy density of modern lithium-ion batteries, you will still only see a little over 250 miles of driving on a single charge.

This is a poison pill for moving freight around. Transportation costs per pound of goods would skyrocket.

Sure, Tesla is great at building passenger cars for a southern California or East Coast commute. It will never do anything else, though.

They’ll probably never be moving reliably across the country, and they’ll definitely never move anything besides several people and some luggage.

Meanwhile, a large percentage of the petroleum-based transportation out there that is vital to keeping people fed, working, and their houses full of junk is completely out of reach.

Take a look at this chart from the U.S. Energy Information Administration:

Everything on that bottom line, and some of the light-duty vehicles in the top, are completely unsuitable for replacement with battery-driven vehicles.

AND that doesn’t include all the trips that far exceed a 250-and-change mile range. OR trips in areas like the Alps where hauling all that weight up and down mountains quickly drains batteries.

Tesla does great work but it should have never been worth more than Ford or GM, let alone both combined. Its market is limited and the competition is about to get fierce.

The next wave of clean tech has already begun to revolutionize the transportation sector.

Trucks in Switzerland and southern California; buses in Japan; fuel cell trains in China and Germany with more coming to San Bernardino County, France, and the U.K. soon; ships — from catamarans to massive cargo carriers to German and Italian submarines — either on the seas or in development; Amazon's huge purchase of fuel cell forklifts; and so on. The list goes on and on.

Toyota is even building a small city called Woven City where ALL vehicles will be powered by fuel cells as a full-scale proof of concept for a society running on hydrogen.

Forget Tesla shares, the real potential lies elsewhere, and one company stands above the rest with its newest generation of advanced fuel cell designs.

This company already controls 70% to 80% of the global market share for buses and trucks. Chinese companies are clamoring for joint ventures and buying up shares.

Jimmy Mengel just released a comprehensive research report on the company to his readers. You should read it now.