It’s Closer Than You Think

Many of our readers know that all too well as they took advantage of the early days in the marijuana boom.

The same goes for the rapid adoption of renewables, especially solar, as it moved from a costly form of virtue signaling to the cheapest form of electricity generation in the nation.

We’re rapidly approaching another inflection point where a small segment of the market is going to see explosive growth.

A new estimate puts that growth at an eye-watering 6,757% over the next eight years.

So what is this new market that is poised to deliver? Fuel cells. And the signs are everywhere.

This year, fuel cell-equipped vehicles are expected to reach 13,600 units. Skip forward to 2028 and that is expected to rise to 932,600, according to a new report from Research and Markets.

That kind of growth is something even the current darling of the non-gasoline vehicle market, Tesla, couldn't manage.

We’re looking at projected growth for fuel cells that is over 40% faster than what Tesla managed.

Check out this latest concept from Nikola: 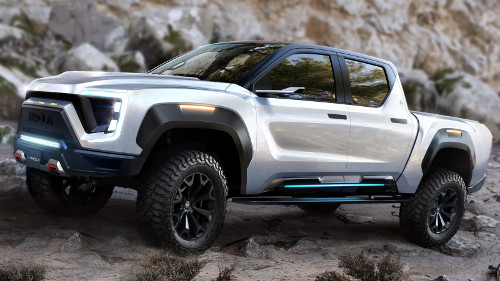 Meanwhile, across the pond, the world’s first liquid hydrogen fuel cell cruise ship is being retrofitted with a 3.2 MW fuel cell power supply and will be sailing the fjords within just three years.

This is hardly the first ship to use fuel cells. The German and Italian navies have been using them in submarines to become virtually undetectable — no moving parts means little to no noise — and stay underwater for up to three weeks at a time.

Toyota is building a catamaran that combines fuel cell power, solar power, and batteries to make its own fuel straight from the ocean as it sails.

Toyota is also making big moves on land, with 10 heavy-duty tractor-trailers going on the road in Southern California as a demonstration, along with 100 fuel cell-powered buses to move visitors around this summer’s Olympic Games in Tokyo.

Hyundai is moving ahead with a multibillion-dollar plan to commercialize hydrogen cars, trucks, and ships in partnership with government agencies.

Audi, BMW, and Daimler are splurging on fuel cell tech. Amazon is on a buying spree for forklifts and other vehicles powered by hydrogen.

Fuel cell trains are already running on commuter rail lines in Germany with more on the way in France and the U.K. China was ahead of the curve with its first going into operation in 2015.

Tesla may make good cars, but its tech can’t scale to large projects like these. Batteries simply can’t muster the energy. It is not physically or chemically possible to do it.

These are large bets across the full spectrum of vehicles we use to move ourselves and our goods around. The potential is far beyond anything we've seen to date from any technology since the internal combustion engine.

The time for the next technology, beyond just stacking a bunch of lithium-ion batteries where an engine would be, is far closer than you’d think.

And with such fantastic growth across the full spectrum of vehicles coming, now is the time to make an early move.