You’ve got nothing to worry about.

There’s probably not going to be a recession.

So there’s no reason at all for you to prepare for one in any way.

That’s the message from the president of the United States.

In an interview with CNN last week, Joe Biden said, “I don’t think there will be a recession. If [there] is, it’ll be a very slight recession. That is, we’ll move down slightly.”

Two years ago, if you even questioned Anthony Fauci, you were labeled as an antisocial, dangerous science-denier. But now it’s OK to ignore the warnings of nearly every financial institution on the planet?

The latest probability models by Bloomberg economists forecast a 100% chance of a U.S. recession within the next year.

The International Monetary Fund said last week it predicted “painful” economic conditions next year, noting that “the worst is yet to come” as the world experiences “the weakest growth profile since 2001.”

In September, the World Bank said even a "moderate hit to the global economy over the next year could tip it into recession."

Meanwhile, Reuters reported last week that the six largest banks in the U.S. have $5 billion in cash set aside to hedge a recession.

All of these groups, which are no doubt absolute economic experts, are concerned about a recession.

However, when CNN's Jake Tapper flatly asked President Biden if the American people should prepare for a recession, Biden said “no.” 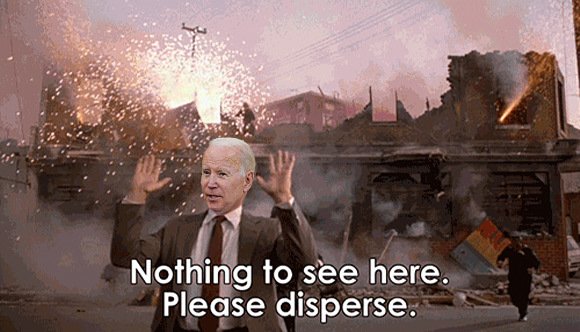 So there you go.

Don’t worry about a recession.

Don’t listen to those pesky experts with their facts and figures...

Because it's becoming clear that almost everything Joe Biden has told the American public has turned out the exact opposite way.

Biden said there was going to be a federal vaccine mandate for the public. There never was any such federal mandate.

Biden said inflation would only be “transitory.” The U.S. is experiencing the worst period of inflation in 40 years.

What are you going to do?

I think it’s obvious to everyone why Biden is so reluctant to admit the economy is in such rough shape: He wants people to trust in the American economy. He wants investors to retain the confidence in markets that has built up over the years.

And that’s not a terrible goal.

But President Biden is not doing or saying what is required to build real, long-standing trust. He just wants to tell you something to distract you for a little while and then hopefully you’ll forget later on.

But trust is not built on lies, exaggeration, or downplaying facts. Trust is not the product of empty hype or false promises.

What does build trust and create public confidence?

In his 1933 inaugural speech, FDR attacked the U.S. banking industry, saying it had ruined the public’s trust in financial institutions. He said:

There must be an end to a conduct in banking and in business which too often has given to a sacred trust the likeness of callous and selfish wrongdoing. Small wonder that confidence languishes, for it thrives only on honesty, on honor, on the sacredness of obligations, on faithful protection, on unselfish performance; without them it cannot live.

Trust, according to FDR, requires:

Do you think Mr. Biden has presented these qualities?

If not, there’s no reason to trust him on the economy

If Joe Biden were being honest, he’d say this: Government spending, on both sides of the aisle, has created conditions for an economic recession. It’s best for the nation, economy, and society as a whole for you to stick this recession out, take a loss, downgrade your lifestyle, and make a sacrifice for the greater good.

But, of course, no one really wants to make a sacrifice for the greater good. No one wants to downgrade their lifestyle because someone else spent way too much. So he’s not going to put it that way. But if Biden really wanted to establish trust, that is what he’d say.

The fact that President Biden is saying you shouldn’t prepare for a recession is a glaring red flag that you absolutely should be preparing for a recession.