Someone Is Coming for Elon Musk’s Crown…

I love a good, old-fashioned feud.

Hatfields vs. McCoys, Hamilton vs. Burr, Al Capone vs. Bugs Moran, Donald Trump vs. well, everyone.

Now we have a new one: Elon Musk versus ... Trevor Milton?

Of course you know Elon Musk — the mad genius behind Tesla Motors and SpaceX — but you probably haven’t heard of Trevor Milton. He’s the founder of Nikola Corp. (NASDAQ: NKLA), which produces heavy-duty semi-trucks powered by hydrogen fuel cells.

Maybe Elon was mad because he also named his company after famed inventor Nikola Tesla. Maybe he’s mad because fuel cell technology could put his lithium-ion batteries to shame. Maybe he’s just having regrets about naming his new son X Æ A-12 Musk?

But if you ask me, I think he may be mad at Tesla’s share price versus the upstart IPO that has taken the electric vehicle market by storm...

If you look at Nikola’s chart versus Tesla’s since the IPO, it isn’t even close:

On the year, Tesla is up 139% while Nikola has gone from a low of $10.27 to a high of $93.99 — a possible 815% gain. That pushed the company’s market value past that of Ford and Fiat Chrysler and made the 37-year-old Milton a multibillionaire overnight. Nikola’s market cap now sits at $26 billion...

Perhaps Elon was a bit jealous?

While there is no doubt that Tesla has had an amazing run of late, there’s a new sheriff in town, and thanks to Nikola’s blockbuster IPO, everyone is suddenly interested in hydrogen cars.

The debate about hydrogen fuel cells versus lithium-ion batteries isn’t a new one. While both of these technologies aim for zero-emissions, only fuel cell vehicles can charge in the time it takes to fill a regular gas tank — while Tesla’s batteries take hours and hours to recharge.

I’d also like to mention that hydrogen is the most abundant resource in the universe.

Nikola made waves when it announced its Nikola Badger pickup truck: 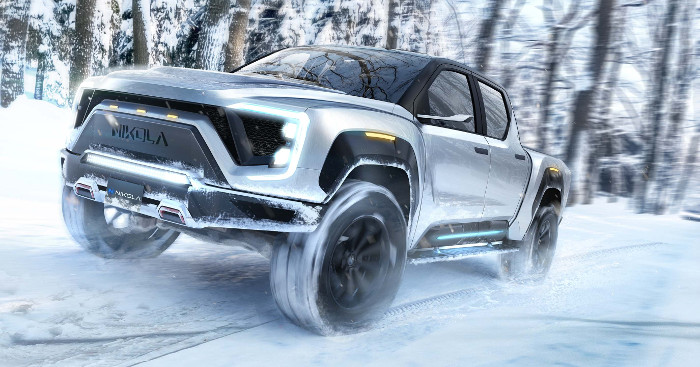 While that got it the headlines, the smart money isn’t betting on thousands of people going out and buying a hydrogen pickup truck. Nikola makes commercial hydrogen fuel trucks that are more ready-made for the reality we live in compared to expensive consumer cars that Tesla is rolling out.

That’s because a hydrogen semi-truck can weigh up to 10,000 pounds lighter than a battery-electric truck. And when you are crunching the numbers for large-scale fleets of trucks, that makes for a huge difference in cost. For one, weight is the number-one factor. The lighter a truck is, the more freight it can carry. The lighter a truck is, the less energy it takes to send it across the country. And if that truck is running on hydrogen, the cheaper and quicker it is to refuel over a long delivery slog.

That’s why I’m investing in a hydrogen fuel company that gets no headlines at all, yet has all the experience and technology it needs to make Tesla and Nikola look like black-eyed goons fighting for media attention…

This company identified the need for hydrogen fuel trucks early, and already has 2,000 of these trucks deployed all over the world. It has also realized the potential for fuel cells to power buses, trains, and forklifts.

While it isn’t as sexy as a Tesla Model 3 or a Nikola Badger, it has the ingenuity and staying power to corner the hydrogen fuel cell market for years to come. It could even make those 815% returns look like child's play. I'm talking profits twice as large.

Now, back to the Musk/Milton feud...

In college, I witnessed a bar fight between two "macho" dudes. While I watched them slug it out, an older gentleman at the bar leaned over to me and said, “Now’s the best time to go steal their girlfriends.”

I laughed but later realized that this analogy fits perfectly for investing. While all of the dumb money is slugging it out over news headlines, it’s better to quietly step in and operate under the radar to really get the returns (or ladies) that you want. Your best move isn't to jump into the fray, it's to step quietly aside and saunter up to the neglected girlfriend.