Your Bank is Playing You for a Fool

Way Beyond Nickels and Dimes...

You know something is cooking when two companies boosted their first quarter profits by 45% — and investors dumped their stocks.

Both JPMorgan and Bank of America beat analyst estimates and saw their stock prices suffer.

Once you dig into the details, it's easy to see why: Risks from derivatives were still obscured. Tax benefits, slashing jobs, litigation, and decreased expenses from bad debts were used to boost results. Overall, revenues shrunk considerably.

Among all six major U.S. banks, only Citigroup saw a slight boost following its earnings announcement.

What do the banks plan to do to reverse this course?

Obviously, their investment banking will continue unabated. Boosting lending would help as well, but that won't happen any time soon...

The Thomson Reuters/ PayNet Small Business Lending Index has fallen for three straight months. The index roughly correlates to overall economic growth one to two quarters in the future: 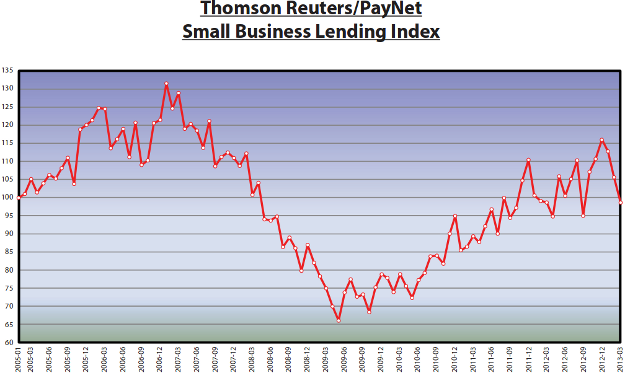 If banks were to ramp up lending, their profit margins would shrink as they try to capture more market share, or give more favorable terms to borrowers. It would also be a big departure from recent trends.

The nation’s four largest banks — Bank of America, Wells Fargo, JPMorgan Chase, and Citibank — control 67.2% of all domestic deposits, while the other 7,215 banks hold 32.8%. However, the big four banks only account for 36.9% of all small business loans. Compared that to the majority, a whopping 63.1%, accounted for by other banks.

There is one surefire way to boost revenue and profits, and big banks have been increasingly tapping this vein to boost their bottom lines. That'd be YOU, the depositor. Depositors can expect to see higher fees to go with abysmal interest rates, yet again.

More than Nickels and Dimes...

You're likely already cringing at the sight of all those fees in the fine print of your monthly bank statement... but what you don't see is how they are changing over time.

Banks are siphoning off dramatically more of their clients' savings from every possible angle.

First off are the fees you are being charged while they use your money to make more money for themselves. In 2012 the percentage of free checking accounts dropped below 40%. At the same time, the average monthly service fees rose sharply to a record $5.48 per month — a 23% rise in just one year.

Only 22% of accounts at big banks don’t come with a service fee, compared to 43% and 48% for medium-sized and small banks.

ATM surcharges have consistently risen and are now averaging $2.50. While you're paying that for every cash withdrawal, the average charge to use an ATM that doesn't belong to your bank's network is up to $1.57.

If you accidentally get an overdraft fee, you'll be hit for an average $31.26.

And the kicker is many bank customers don't even know they were automatically subject to these fees when they opened the account.

But we're not done yet. The fee frenzy continues...

Finally, the interest you are collecting while they use your money to make money for themselves is a paltry 0.05% for checking accounts.

Dipping below the minimum amount a single time can wipe out any interest you accrue over a year.

At that incredibly low interest rate — even if you had the maximum $250,000 FDIC insured amount in an account... you would only receive $125 in interest over the course of 12 months. In other words, using an out-of-network ATM just once a week erases all gains.

Buy a CD and you'll average .75% over one year or 0.86% over five — far below inflation and destined for a real loss of your wealth.

Instead of reform, they get creative...

Take Union Bank for example: For an extra $1.50 per month, you can skip the long wait times while trying to call them. These are, of course, the very same long wait times they created by skimping on customer service in the first place.

M&T Bank is adding a slew of new fee-based services. For about five bucks, it will waive the penalty fees it normally charges customers who use other banks’ ATMs. For an additional $4.95 a month, M&T will refund the fees those other ATMs charge non-customers. $4.95 a month will also get you checks and a safe deposit box or a waiver of the transfer fees charged to avoid incurring an overdraft.

Do you see what's going on here?

You have the opportunity to pay your bank up-front to avoid the fees they impose upon their depositors — all while using the money from depositors as reserves or for profits derived from loans.

The Sooner the Better

Banks are desperate to stop shrinking revenues and will continue to abuse depositors in good times for an easy boost.

It is too easy to become complacent with what we have now, and expect the free market to create an environment where all of your options are similar.

There are a number of banks resisting the urge plunder their customers. A small community bank in Maryland called Capital Bank has seen a 104% growth in deposits since the recession ended in mid-2009. Ally and Discover have grown fast as well, with 74% growth to $44 billion and 44% growth to $42 billion, respectively.

To put this in perspective, the nation's three largest banks (by deposits) — JPMorgan Chase, Bank of America, and Citibank — have three-year deposit growth rates of less than 26%, while the national average is a mere 18%.

Online banks are your best bet. Two-thirds of checking accounts from online-only banks have no maintenance fees. And minimum deposit requirements are also significantly lower.

Here at the Outsider Club, we've been watching this trend for a while now. We're working on a research report that will give a comprehensive look at a number of options you have as a depositor. Considering some of the bank accounts we've found so far will give 80 times more interest than the national 0.05% with few (if any!) fees, this report promises to be a great resource...

Stay tuned. We'll have more information in the next several weeks.