Why Tonight’s NFL Game Is Worth Millions

Will tonight be a win for Tom Brady?

Millions of sports fans certainly think so. They’ve placed big bets on the chance that he’ll win, as he’s favored to do — but will they be right?

Because there are also a lot of bets being placed the other direction (even despite the odds). Tom has collected plenty of anti-fans over the years, and this group of naysayers have shown they’re willing to plunk down large sums in hopes he’ll fail.

And what is it about this whole greatest-of-all-time thing, anyway?

I personally find it to be an annoying acronym. (Doubly so when it’s written with a 🐐 emoji, as I’ve seen several times over this past week.) The obsession with greatness steals too much away from the overall sport. The way some ESPN pundits talk, you’d think he was the only player in the game!

But love it or hate it, there’s no denying that the presence of the GOAT has a way of getting sports fans riled up.

When Tom Brady steps onto the field, there are millions of people willing to put down a lot of money to back up their prediction of his performance. Perhaps it’s more satisfying to make a bet when greatness is on the line?

I imagine there are many sports fans out there who are making bets solely for the thrill of having a stake in the outcome.

For Tom’s fans: It’s the chance to feel the rush of victory when their favorite player pulls off a win on the 310th game of his long, legendary career.

For Tom’s haters: It’s the chance to bask in the wicked delight of proving that he’s an over-hyped, over-paid, ball-deflating cheat.

Most fans watching tonight’s game have an opinion — and they’re willing to back it up with dollars.

But I suppose that’s the best part of betting: It’s the chance to put your opinion out there (and win glory and riches if you’re correct). I once overheard a sports fan who said it this way: “I like getting paid for being right!”

But of course, that requires making the right bet. Or does it?

I, for one, am looking forward to making money on the game. But not because I’ve placed any bets.

My money is on sports betting itself… and the small group of companies that make the mobile betting apps possible.

In the old days (meaning way, way back in early 2018) there was no such thing as legal online sports betting. It was still forbidden by federal law. But with one bang of the gavel the Supreme Court overturned the ban, and since that moment we’ve seen states legalize one after another.

You can use an app right on your phone, making bets simple, safe, and accessible. And with this freedom has also come with an unexpected benefit: the end of illegal bookies and underground betting.

Because why give money to some seedy guy who might break your kneecaps later when you can just use your phone?

Billions of dollars are bubbling up from the shadows and are appearing on legal books. This flood of money has helped drive the stock prices of sports betting firms, many of which have seen triple- and quadruple-digit gains.

And now that it’s okay to make bets in the open, there’s been no lack of sports stars who are throwing in their lot with the betting apps...

Sports Betting Is Putting All the GOATs in a Row

Now, I know what I say next is controversial (who’s the GOAT, and why, seems to incite endless debates at the sports bar).

But regardless of whether or not the following legends are GOAT enough to deserve the title, there’s no doubt about the fact that they’re using their stardom to promote sports betting… 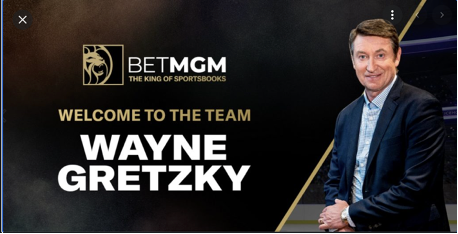 Hockey GOAT Wayne Gretzky has signed on with BetMGM.

Online sports betting is barely two years old. As it grows and expands into new markets, there’s going to be a lot of new opportunities for everyone — and early investors stand to make the most money.

So how do you get started? Well, my colleague Jimmy Mengel has made it easy for you. He’s put together an impressive playbook on how to make money off the rise of this hot new industry. It’s thanks to Jimmy that I first found out how fast legalizations are taking place across the country… At present it’s 22 states, but another 25 states are on the way. Talk about a sudden, disruptive trend!

Jimmy has identified three small sports betting firms with a lock on the technology and patents —the odds are good they’ll generate large returns as legalization spreads. Jimmy has made great money on emerging markets before (cannabis, fuel cells, mobile technology) and sports betting could soon become his greatest yet. Heck, given how fast they’re moving, these three stocks could quite well become Jimmy’s greatest winners of all time.

Which brings us back to the GOAT and tonight’s game.

I went to college in New England, and so I was living in Boston when Tom Brady pulled off his first three Super Bowl wins with the Patriots. It was infectious. I’d never cared for sports before that time, and so I can honestly say that it was Tom Brady who turned me into a sports fan. And while I’ve cooled on him quite a bit since… I’d be lying if I didn’t admit that I’m secretly still rooting for him. Just a little bit.

But whatever happens, you can be sure betting dollars will be changing hands (and that sports betting firms will be raking in fat fees) — because nobody brings out the bets like the GOAT.

As I used to joke whenever he won another Super Bowl: “In Tom we trust.”

P.S. If you watch tonight’s game, you’re going to see a lot of ads for sports betting apps. Jimmy has the inside story on why so many ad dollars are competing for your business — and what this means for smart investors.