Why I Do This

My travels and travails...

“The world is a book and those who do not travel read only one page.”
— St. Augustine

One day, many years ago, I decided I needed to do something drastic... I was a few years into writing The Crow’s Nest, but I had not nailed any massive stocks. I had some success, for sure.

I was up triple digits on a couple of stocks and double digits in a handful of dividend aristocrats — but I wanted something more exciting. As longtime readers know by now, reading about stocks can get pretty boring after a while.

I’ll let you in on an open secret — writing about stocks can be dreadfully dull as well. Frankly, I was getting burned out reading earnings reports, scanning chart patterns, and trying to discover underreported stocks.

I kept finding that stocks were unknown because they didn’t have much to brag about... otherwise, they would be known!

However, my best stock pick at the time was Collector’s Universe (NASDAQ: CLCT). It was quite unknown as far as stocks go. While it was listed on the NASDAQ and had been a publicly-traded company for two decades, almost nobody I talked to in the industry had ever heard of it...

Collector’s Universe — for anyone who hasn't subscribed to The Crow's Nest — is a company that authenticates collectible coins, autographs, and sports cards. I was interested in the company itself and the huge 7% dividend income stream.

Anyone who knows me is quite aware that I have a massive baseball card collection. Thankfully, my son Hank got the same bug, so I get to replay it all over again. We've been sifting through my collection for the past few months and have come up with a shoebox full of Hall-of-Famers, forgettable ne'er-do-wells, and mustachioed men from the 80s. Inexplicably, there are also 25 Jeff Bagwell cards.

I was never an Astros fan. But I digress...

I love sports and was personally intrigued by a company that got paid millions to sift through old baseball cards and autographed bats from legends like Babe Ruth, Brooks Robinson, and Roberto Clemente.

The company’s charts looked good. The growth was there. And — like I mentioned — the dividend has grown for years. On paper, I was rather confident about recommending it.

In reality, I was still confused that such a prosperous company could go unnoticed by the mainstream. So I convinced my publisher that I needed to fly out to Orange County, California to get an inside look at the operations. He agreed...

Now I’ll be the first to admit that while it was a business trip for the benefit of my readers, personally, I imagined I’d be swimming backward in a sea of baseball cards and rare coins, a la Scrooge McDuck.

Luckily for myself and for early crew members, both needs were fulfilled. I got to inspect a Mickey Mantle bat with an expert from Pawn Stars, I was able to hold a one-million-dollar stamp in my hand... 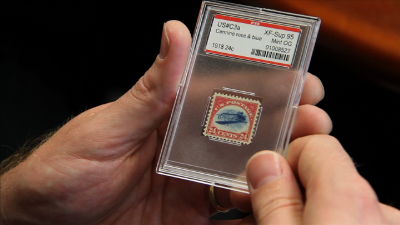 I also spoke with the co-founders, the CFO, and the employees themselves at length.

I walked away with the comfort and confidence to bring you the story and the recommendation. Today, we’re up 113%... with a heavy dividend payout to boot. Had I not made that visit, I may have never recommended the stock.

That was 2013. Let’s jump ahead to 2015 — the time when I was getting burned out. I began thinking about how invigorating, enjoyable, and prosperous my trip to Collector’s Universe was. Why wasn’t I doing more “boots on the ground” research?

This was also around the time that I was really digging into the nascent cannabis market. I had identified a few interesting companies — but I also discovered a slew of garbage companies that were clearly ex-mining stock pump-and-dumps that simply snuck the word cannabis into their company names.

So I constructed a plan: I would drive to Smiths Falls, Ontario to Tweed headquarters. It was the most legitimate of the cannabis companies I had been researching and it had opened up shop in an abandoned Hershey Chocolate factory.

What could be more fun? A road trip, a warehouse full of marijuana, and an old chocolate factory?

I got the go-ahead from company brass, called my friend Dale, who has access to top-notch camera and recording equipment, packed a few days' belongings, and hit the road. We began driving up the east coast.

There are few things I enjoy more than a good old-fashioned road trip and we made it to the Canadian border in a breezy nine hours. One thing I did not consider was what I was going to tell customs when I got to the border...

As the car rolled slowly up to the border crossing, the officer asked me politely “What brings you to Canada?”

“What do you do, and who are you visiting?” he replied.

I certainly wasn’t going to begin my Canadian adventure by lying to the authorities, so I told the truth: I’m a financial reporter and I’m here to visit Tweed in Smiths Falls.

That’s how long ago this was: Canadian legalization was still years out, and Canada wasn’t yet the cannabis capital of the world. I gently told him that it was a large marijuana factory and gave him the address. I foolishly left out the fact that it was a “legal” marijuana factory. This was apparently a red flag. The Mountie asked me to get out of the car, and he proceeded to search my vehicle while his partner made a phone call to verify our destination.

The partner nodded, and the Mountie stamped our passports and allowed us to pass. It was time to get down to business. We agreed to meet with Communications Director Jordan Sinclair and CEO Bruce Linton at the factory. It didn’t initially look like anything to get excited about. It was a large facility, set in an industrial area of town. It was gray, lonely, and basically abandoned.

But when we stepped inside, everything changed. The factory was buzzing with employees in lab coats, and that first smell stepping into the grow area was one I’ll never forget. After touring the entire facility and spending several hours with Bruce Linton himself, I was completely convinced that cannabis was going to be the next new industry. Bruce told me that Tweed was changing its name to Canopy Growth Corporation that very week and the rest is history.

You can watch it here.

Long story short, it turned out to become the most important trip in my entire investing career.

I know it was the most important trip for much of The Crow’s Nest crew as well, because you’ve written and told me as much over the years. The trip was worth it solely based on how many of you wrote me with tales of how this single stock rescued your portfolio, sent a child to school, or eased your fears about retirement. But it never would have happened had I not made that decision to shake things up and investigate something new and mysterious.

I've made it a mission to do more and more of these trips. In fact, I'm booked for another California trip next week to uncover a new stock that could be just as profitable.

I hope you join me for my next series of adventures...