It is easy to forget with all the explosive growth in the marijuana sector how far it could really go.

We’re still in the early days of the marijuana industry.

Sure, this is obvious in the U.S., but it is true for even the most comprehensive recreational and medical markets.

Look no further than what we discussed last week, as Canadian businesses are falling short of sales expectations because of problems getting what’s grown into stores.

It isn’t just regulations and laws though. It is market penetration and consumer convenience, too.

Just this week news was picked up that shows exactly what could be coming sooner than many would believe.

During a conversation hosted by The Texas Tribune, Whole Foods Market CEO John Mackey answered a question that wasn’t asked.

Leading off an audience member's question of whether his company would consider selling “alternative proteins” like insects, Mackey pivoted unprovoked to a far more lucrative product the company wants to sell:

“If cannabis is ever passed in Texas, chances are good that grocery stores will be selling that too. You just never know what happens over time with markets. They change and evolve.”

It certainly isn’t a stretch. Hemp and hemp seed products have been easy to find in health food markets in everything from lotions and beauty products to cereals and pastas.

The company has also publicly stated that it is going to be one of the hottest trends in 2019.

In a top 10 list for the year, the company stated:

There is certainly good reason. The organic food market is estimated at about $33 billion. A nationwide legalization of cannabis and hemp products would be worth an estimated $36 billion, according to the third annual ArcView State of Legal Marijuana Markets report.

It wouldn’t stop at retail. After all, Whole Foods Market’s owner, Amazon, would love to get into internet sales and get a decisive advantage in bulk purchases for national sales online and in stores.

Whole Foods certainly won’t be carving out a spot for a cannabis aisle yet.

There are still some big hurdles in place. The Hemp Farming Act of 2018 is broadly supported by both political parties but not in place yet. It would start removing barriers to hemp growers and hemp-based products.

There is no accommodation on the federal level for cannabis-based products, either. Plus many states have restrictive regulatory systems in place.

As large as these hurdles may be though, the opposition to them is reaching a critical point to tear them down.

Just look at the nearly two-thirds of Americans who support broad legalization, according to a recent Pew Research poll: 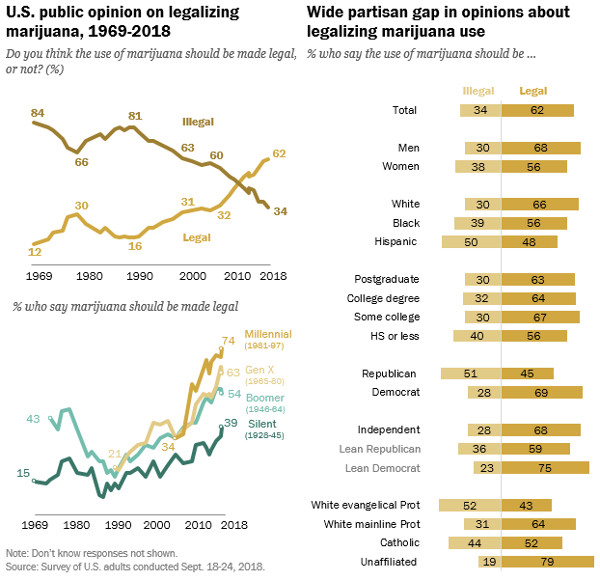 Multiple bills have been proposed to reschedule cannabis to allow much broader recreational and medical use in states that have approved it.

In California, for example, 10,000 temporary permits for growers could expire in the next several months if lawmakers fail to pass a bill to give them an extension.

Whole Foods, Amazon, and all of their competitors are certainly going to watch this trend as well. We’ll see increasing pressure from them to let them into the market.

A wave of consolidation is already under way that will leave the cannabis industry with a handful of massive companies with maturing revenue streams and maximized efficiency.

The pressure is amplified by companies outside the industry trying to get a foot in the door, and a “first mover” advantage over their competitors.

It may be as little as a couple years before that is pushed even further by a scramble to provide value-added products in bulk to retailers that can move cannabis and hemp products out of dispensaries and into trendy stores and two-day shipping.

The industry is already unrecognizable from where it was several years ago. This is where it is moving towards in the next several.

Now is the time, especially with rapid market growth expected with the status quo, to stake your claim of the profits.