Who Won the Election? ME!

If you're invested in this, it didn't matter who won...

At times last week, I felt like I was stuck in the waiting room in Hell...

I personally spent hours watching cable news — something I usually try to avoid at all costs — as John King played with his “Magic Wall” like a sugared-up child who just got his first iPad. Eventually, the pundits just ran out of things to say and were basically sitting around asking each other how much sleep they got.

I almost felt bad for them.

In the end, the networks declared Joe Biden the winner. However, according to the President, we still don't have a clear winner.

But if you were paying attention, there was one very clear winner in this election: cannabis investors.

While we were all on pins and needles, eagerly awaiting the final Presidential Election tallies, it was already quite clear that regardless of who won the White House, cannabis ballot initiatives in both red and blue states had completely run the table.

This is a big deal, and cannabis stocks have responded in an equally big way... 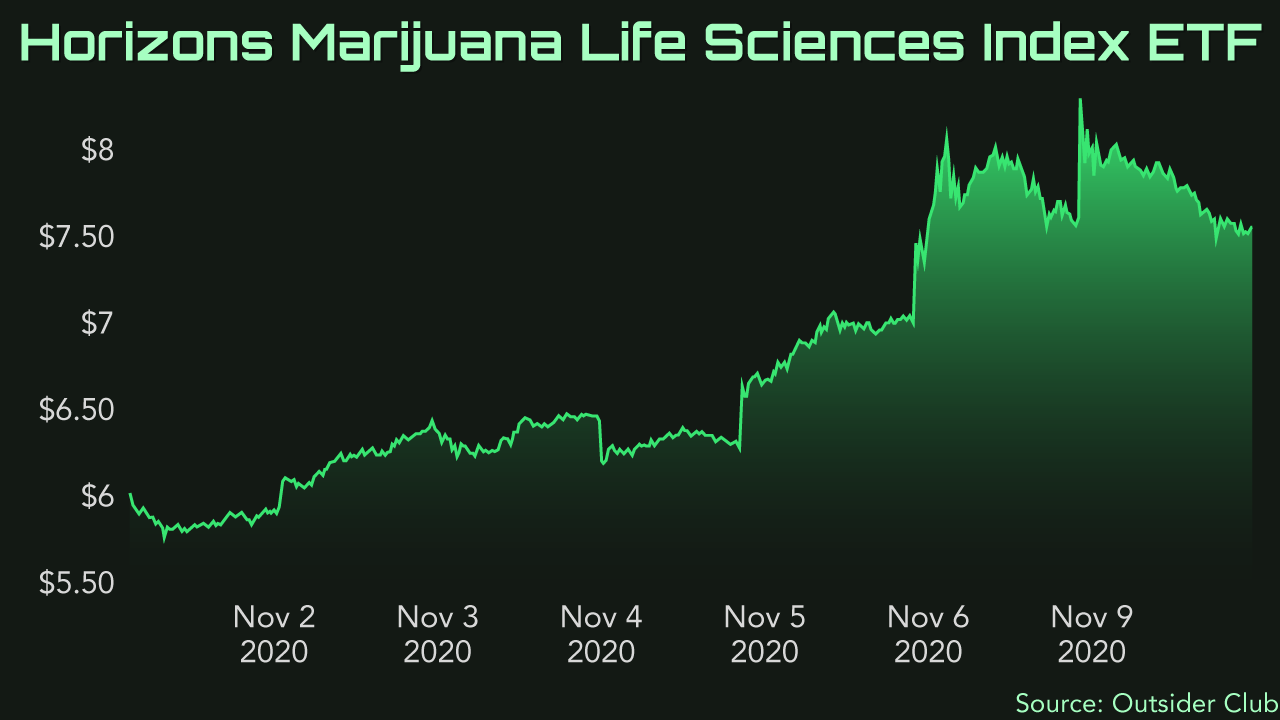 That's quite a boost. In fact, all of my cannabis stocks have shown incredible growth this year, and the election just sent them into the stratosphere. One of the Canadian majors — Aurora Cannabis (NYSE: ACB) — went as high as 135% over two days.

Now, much of that exuberance has to do with those extra states approving legalized recreational cannabis. But what really excites me in the short term is the fact that New Jersey legalized cannabis. While that's a big deal in and of itself, the more important part is which dominoes will fall next.

If you know your geography, then you'll know two of the states that border New Jersey: New York and Pennsylvania.

Think about it, why would two states currently facing budget shortfalls and record unemployment allow their citizens to make the quick trip to Jersey to dump cash into their neighbor's economy — creating millions in tax revenues and thousands of new, well-paying jobs?

They wouldn't. According to Gov. Andrew Cuomo, it won't take long either.

So when would New York do it?

“Soon, because now we need the money,” Cuomo said on a recent podcast. “There are a lot of reasons to get it done, but one of the benefits is it also brings in revenue, and all states — but especially this state — we need revenue and we’re going to be searching the cupboards.”

In Pennsylvania, the current medical cannabis market is expected to bring in $500 million in sales this year and could hit $1 billion in sales within three years. If they legalize recreational cannabis, the sky is the limit.

“Now more than ever, we see a desperate need for the economic boost cannabis legalization can provide. I am proposing we legalize adult-use cannabis here in Pennsylvania," Governor Tom Wolf said in a statement.

It's been predicted that taxes on cannabis in the Keystone State could exceed $300 million a year. Guess how much Pennsylvania's budget shortfall is right now?

Election day was the dawning of a new America. Not a red or blue one, but a green one. Once larger states like New York and Pennsylvania fall, it's only a matter of time before the entire map of the U.S. is painted green.

That's why I'm positioning my cannabis investment dollars right here in the U S of A.

You should do the same.