Who Will Become Today's Barons?

There was a short period of 21 years where fortunes were made and California as we know it was born.

It was the short and glorious age of the clipper ship. Tall, slender, and faster than anything else at the time, they revolutionized commerce only to be quickly made obsolete and fade into virtual obscurity. 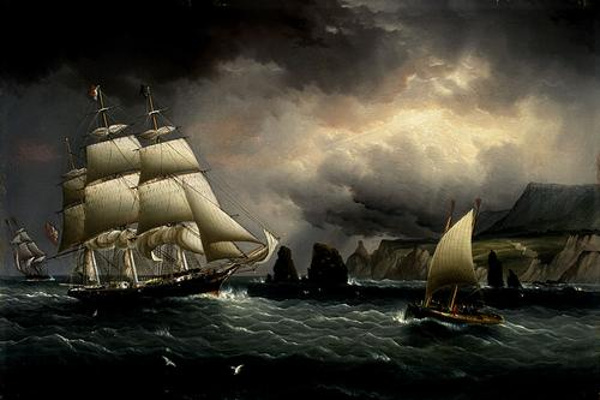 There are no remaining original American clipper ships today, but their legacy lasts.

They created fortunes for their owners — like Warren Delano, grandfather of FDR, and the Forbes family.

There aren’t many lessons to learn today about investing from nearly two centuries ago, but one stands out from the short but storied clippers.

San Francisco is known for its high prices now, but they’re nothing compared to the cost of living during the Gold Rush.

Everything to build a city and feed its people had to be shipped around the tip of South America.

Eggs were a buck each. Boots were $60. In today’s dollars, that’s $20 and $3,000. Then there were picks and pans and everything needed except lumber to find and mine gold. California had no industry, even agriculture, to support the population boom.

Clipper ships had already seen a boom as they were put on the lucrative China opium routes and longer tea routes from China to the U.S. east coast in 1843.

Tea was a seasonal cash crop then. The first to get it to market in the affluent east coast cities made the lion’s share of the profits. As for opium smuggling, speed was of the essence.

The California Gold Rush kicked off in 1848, and the fast ships were redeployed and new fleets quickly built.

The first shipment to San Francisco on a clipper came the same year, cutting travel time from 180 days to maybe 100 or 120.

New ships weren’t even tested at sea before they were loaded up with a couple hundred thousand dollars — around $4 million to $5 million in goods in today’s terms — and sent on the long, brutal, and deadly journey around Cape Horn.

But the risk was worth it. A ship could pay for itself with a single trip.

A new market had been born overnight and fortunes were being made overnight as well.

An End To A Short Era

All things must end. 100,000 people had made it to California however they could, and the clipper ships had given them everything they needed to build what would become a world-class city.

But just 26 years after the tea trade boom and 21 after the Gold Rush, the Transcontinental Railroad and the Suez Canal were completed.

Overnight, the clipper ships had lost one of their prized routes. The fast sail-powered freighters held on for a time, but hybrid clippers with coal-powered steam engines were improving, along with fully-steam-powered freighters.

The advantages of a set schedule and the lesser impact of slower speeds when the maritime route became so much shorter made a decline inevitable.

However, for the smart clipper owners, this was hardly an issue. Their fortunes had been made, or their existing fortunes had ballooned, and there were new markets to conquer.

The Forbes family turned their tea and opium money into a fleet of clippers, then pivoted into railroads like the Chicago, Burlington & Quincy Railroad and other lines in the Midwest and Michigan.

The Lesson To Learn

So what is there to learn from what happened a good 150-176 years ago?

There is nothing, nothing, like the gains that come from a brand-new market.

It doesn’t matter if it doesn’t revolutionize the world like railroads would right after the Clipper ships’ fast rise and fall.

What matters are the kinds of profits that can be made when you are the front lines as something grows from nothing.

Big windfalls rarely if ever come from investing in established businesses. The Delanos and Forbes certainly did that as well. It is important, but that is a multi-generational process.

They and the other clipper barons wouldn’t have become owners of the railroads and mines across America within a matter of years without pouncing on the opportunity in front of them, risk and all.

Think about this as you see new markets opening today.

A prime example is the massive wave of legalization of cannabis, which is far from over in the U.S. and has only just begun its path to a worldwide presence.

Another is the profound need to expand production of batteries — and the materials they are made of — as the world transitions between energy paradigms.

These are huge trends that will play out over the next couple decades. Make sure you’re in them now.

The Shift Is Underway
The great reflation begins this month with the first rate cut in a decade. Remember what happened last time? Outsider Club editor Gerardo Del Real reminds investors of what to be looking out for...
Most Americans Aren't Prepared. Are You?
Many Americans are unprepared for when, not if, things take a downturn. Those with little to no savings may not find themselves worrying now, but they should be...
Are You Profiting From This Repeating Pattern?
Have you heard the news? Gold prices are at their highest level in six years and gold stocks are outpacing a record-setting stock market. Are you going to profit from this repeating pattern?
Investing in Marijuana Without Getting Burned
The marijuana industry has rewarded scores of investors with life-changing gains.