Who Is Winning? The Robots.

There is a lot of blame to throw around these days, but I want to focus on one place in particular.

It isn't President Trump, who can't get through a several-minute speech without his staff having to quietly correct him after press briefings.

It isn't the federal government, which can't get its act together and is leaving too much up to a fragmented state and local response.

And though I have a serious bone to pick with it, it isn't the Fed, which was too weak and lax about restoring interest rates over most of the last decade and has nothing left it can do but guarantee our money to protect others.

At this point all the Fed can do is take on more debt from corporations. A massive transfer of wealth is happening right now from the public sector into the private sector.

All of these debt purchases, now including the newly announced short-term debt purchases, coupled with a Fed Funds Rate pegged at zero again just reinforces years and years of bad behavior and a deeply flawed paradigm.

U.S. nonfinancial corporate debt of large companies is over $10 trillion and represents about 50% of U.S. GDP. Add in small- and medium-sized business and the estimate soars over $15 trillion and the total goes to about 75% of GDP.

The fact that businesses are going to fail with such accommodative terms is a terrifying indictment of the real strength of the 11-year bull market.

No, today we're going to talk about who is winning in this screwed-up stock market.

It's the robots. They're taking over.

Algorithmic trading is the reason why we're seeing such massive losses followed by strange and ephemeral rallies.

Somewhere around two-thirds of all trades are set in motion by a human setting a computer program free into the wilds of the stock market with a couple parameters built-in.

Hence volatility that doesn't make sense. At least for how you and I trade in stocks.

It makes perfect sense if it doesn't matter in any way what a company actually does, or how much revenue it pulls in, or anything else that determines if a company does good business.

It really wouldn't even matter if it was a real company at all.

All that matters is momentum and volatility. A bunch of liquid-cooled servers are firing their little silicon bits billions upon billions of times a second and shoving share prices around with large orders within milliseconds or less.

The only thing that determines if they make money is if they do it faster — both recognizing the momentum and executing the trade.

While we're looking for value, a game of virtual musical chairs is being played at the speed of light in the same place.

Take a look at this chart from the Wall Street Journal, it is about as clear of a visualization as I could imagine for how this makes volatility so much worse. 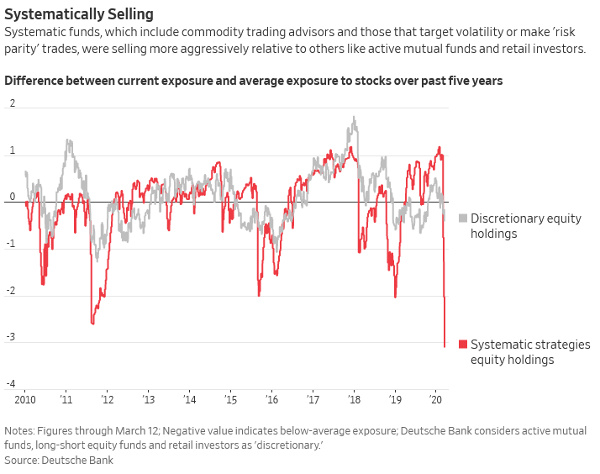 I don't want to just complain though. I bring this up for a reason.

I'll stress this again — we are playing the game at a different speed. We have to use a strategy that makes that a strength.

Yes, I am worried about a recession. I am not taking my cues from the stock market regarding the probability or severity of one.

With the robots in charge, with no reason to buy or sell except to squeeze a couple pennies out of intraday volatility, I'm sticking to a strategy that works at my speeds, with a longer time frame, and with far more nuanced and completee information about what I'm buying.

I'm picking stocks and plan on holding them through the volatility, come hell or high water. I'm looking for trends that — though they may be set back for now — will undeniably advance in years and decades to come.

I'm looking at how the pandemic will act as a catalyst, will change our priorities, and how this disaster creates opportunities.

And I'm looking towards a future where investors finally realize that the risk of this kind of drop has been building up this whole time and towards the return of capital to tried-and-true safe assets.

I hope you do the same.