What The Inverted Yield Curve Means for Investors

It’s been a fun month for just about everyone in the finance world.

Questions abound from friends and family while the stress just makes us want to nurse a drink in gloomy silence while the markets are closed.

The most depressing for me was hearing from a friend who went to cash in his retirement account. Of course it was executed late and with the worst possible prices right at the bottom of the dip. That is all too common and rarely a coincidence considering the system is rigged to maximize institutional investor gains.

After a couple questions, some answers about how he got played by institutional investors, — probably his own account provider — and some colorful and salty exclamations on his part, the gloom was shared over drinks on my tab.

Cold comfort after a nearly 5% setback that’ll take a good year of contributions to cover.

Not everyone has a person to talk to though, and they turn to our universal friend on the internet, Google Search, for better or worse.

It ends up a record number have been doing just that, enough so that Reuters ran an article just on the unprecedented interest online and shared this chart: 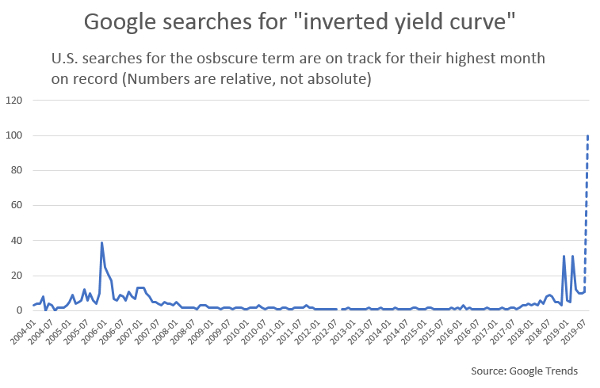 For such a wonky term, it is getting a lot of attention. The President tweeted about it. As he should, being briefed on economic indicators.

News programs are all over it with obligatory explainers. Apparently even Stephen Colbert tried to wade in on late-night TV to explain what is going on.

To be honest, I fought the urge to put in an obligatory explainer right here. It’s just ingrained behavior for many of us, but I think we’re all covered by now. If not, just Google it?

Instead, I want to talk about what is starting now and may continue for some time. Maybe even years.

I’m talking about the uncertainty and potentially long wait to see if the inverted yield curve actually predicts a recession this time around.

People want immediacy in all things good or bad. We crave it. Rarely is anything worse than the wait and sense of helplessness that comes with not knowing what is going to happen.

And of all the questions I’ve received so far, this is the one where my equivocation and qualifiers are clearly the least tolerated.

Here is another chart from that Reuters article: 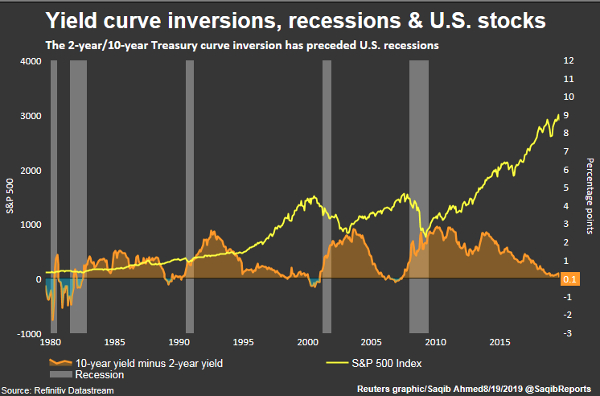 The scale makes it hard to see, but this chart shows three scenarios played out.

Yields can go deeply inverted, see-saw, and cause a series of recessions in relatively rapid succession. Yes, interest rates were all sorts of out-of-whack back in the late 70s and early 80s, but in the end, two recessions hit.

Very small trips through inverted yield territory can cause stocks to dive and a recession to kick in almost immediately, as we saw during the Dot Com Bubble bursting and early 2000s.

Then there could be a long wait, several years even, between the inversion and the Great Recession or the much less severe recession in the early 90s.

And sometimes, though it isn’t common or shown in the chart above, a yield inversion means nothing at all.

Absolutely no one can tell you what is going to happen now. No one can truly time it. Even the pros are left waiting to see.

None of us like this aspect of yield inversions at all. It is a good indicator of an upcoming recession but is absolutely terrible at predicting the depth and breadth of any recession to come.

Meanwhile, retail investors get shaken out of volatile markets. More of that is certain to come.

Wall Street prefers and even pushes this sense of urgency because it’ll take as big of a bite of our wealth as possible if we move in and out of the market.

There aren’t many clear ways to mitigate risk during the long-term waiting game to come, and there are even fewer available to small investors.

They do exist though and one of the most obvious and lowest-cost options is already doing well for investors who have done their research and planned ahead.

Gold and gold miners are on an absolute tear. GDX, the most popular major gold miner ETF, is up over 50% over the past year, easily beating the Dow, which is below a 2% gain over the same period.

And GDX is a diluted basket of massive, slow moving, debt-burdened majors. The best small gold miners out there are up even more, and some should see even larger gains in the coming months.

So are we doing this recession thing or not? The only answer a yield curve inversion can give is “most likely, one day or another.”

In the meantime, it is clear where we should turn to keep growing wealth while we wait to see how this will all pan out.