Welcome to a New Era of Nuclear Energy

Historically, nuclear reactors have always been expensive and time-consuming — it’s just a fact of life.

Building a facility like the one below, often the size of a small town, costs billions of dollars. It can also take up to 17 years, as was the case with Finland’s Olkiluoto 3. Therein lies the conflict between the fiscally conservative and the forward-thinking progressives.

Very few investors can hope to make money when the average project runs billions of dollars over budget and stretches years past the expected completion date.

Physicists can cry about the potential for limitless clean energy all they want. If the project loses enough money, you can bet it will be the last one.

The industry’s solution to this problem has been practically nonexistent. Instead of engineering these problems away, reactor designers just continue making their projects bigger, more expensive, and more prone to delays.

That’s not even mentioning the industry's safety record. Although it’s statistically the safest way to generate power, the potential for disaster is hard to ignore.

Fukushima, Three Mile Island, and Chernobyl are isolated incidents, but the potential for world-altering disaster is admittedly unique to nuclear power. It’s a tough fear to talk the average person out of.

The only solution here is to completely redesign nuclear energy. The next generation of reactors will be everything that old-school designs aren’t: smaller, cheaper, and safer.

You might have heard us talk about these new reactors before, but only as a hypothetical.

Like any great new tech, it has spent years if not decades as a concept. The development stages for anything regarding nuclear have more red tape than perhaps any other industry.

Opponents of the industry claimed they would never see the light of day, but they're eating their words as of this week.

Small modular reactors, or SMRs, have officially leapt off the page and into the real world. 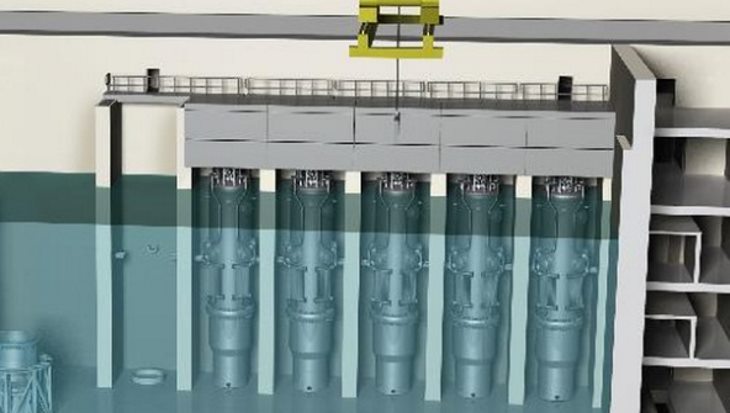 The image above shows five SMRs wired in series to produce about half as much energy as a modern nuclear reactor, but with a few key differences.

These units use passive safety features, so power failure won’t cause a catastrophe. Plus, they're tiny and cheap compared with typical reactors because they're prefabricated in a factory. And they're versatility means instead of requiring an entire ZIP code to be dedicated to each one, they can be installed anywhere.

These reactors solve basically every gripe that regulators can find with nuclear energy. It’s as close to a perfect solution as any form of power could hope to get.

And for the first time, they've officially been approved by the U.S. Nuclear Regulatory Commission. It starts with a single company, but very soon these reactors could be powering just about every home in America.

The company that received the U.S. government’s blessing is NuScale Power. It’s a landmark achievement that deserves nothing but praise.

But if you ask me, the industry is still too young for the average investor to feel secure. If you're the risk-loving adventurous type, I absolutely encourage you to sink some money in NuScale.

But for our readers looking to score reliable gains as the SMR industry scales up, I implore you to think bigger.

The world’s network of nuclear reactors is still thriving, and they depend on a reliable source of fuel. Random inconsistencies in the composition of this fuel can pose major safety risks, so the list of trusted suppliers is fairly exclusive.

That’s the vital point I recommend our readers target. SMRs represent the future of the nuclear power industry, but nuclear fuel is the unwavering constant that every reactor needs.

Conservatively speaking, I estimate there are at least 25 years between now and a complete transition to SMRs. But that doesn't mean we can’t make a killing in this industry NOW.

Our team of analysts is currently tracking a nuclear fuel manufacturer that makes the most efficient, safe, and lucrative option on the market.

Like SMRs, this company just received a full green light from the U.S. government. It’s set to become the standard for the nearly 500 reactors still running around the world.

Keep reading here to get all the info you need: stock picks, market guidelines, and real-time updates on exactly when to buy and sell.

Don’t dive in alone. Let us guide you.

Luke’s technical know-how combined with an insatiable scientific curiosity has helped uncover some of our most promising leads in the tech sector. He has a knack for breaking down complicated scientific concepts into an easy-to-digest format, while still keeping a sharp focus on the core information. His role at Angel is simple: transform piles of obscure data into profitable investment leads. When following our recommendations, rest assured that a truly exhaustive amount of research goes on behind the scenes..