We Already Paid For This Rally

All-new highs are being hit and investors are chasing it by flooding money back into the market.

But the simple reality cannot be denied: We already paid a hefty premium for this uptick when it was baked into stock prices, and chasing it further without much to base it on will backfire.

We’re coasting on short-term hope, buying the same lines that we did a year ago — or two — for why to double down.

This lack of memory and short-sightedness is likely to set up a major disappointment for broad market investments while propelling safe havens to new highs next year.

We simply have to face facts: Stocks are too expensive and the catalyst for this upward trend is reliance on a greater fool buying our shares.

That inflow of money? In the last three weeks $15 have returned to the market for every $100 that left through the year, according to BofA Merrill Lynch data: 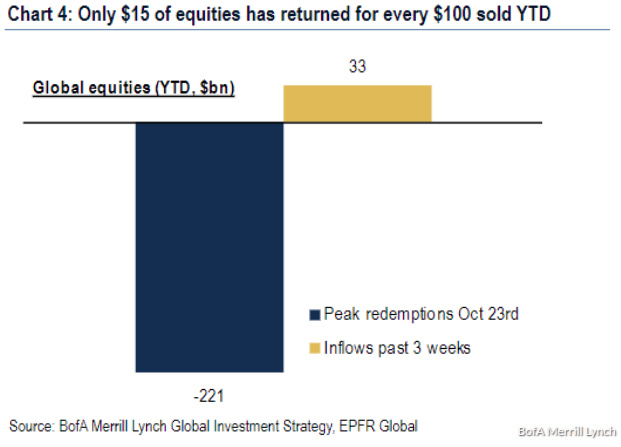 A closer look at the data shows that it looks even worse for U.S. equities. $123 billion has left U.S. equity funds so far this year. Meanwhile, Europe is seeing inflows and emerging markets saw the largest inflows in 41 weeks at $3.3 billion.

This is hardly what we want to see with the news we’re getting from economic data and the bond market.

Retail sales were horrible in September and October’s numbers didn’t make up for it. Kohl’s and Home Depot just put out numbers today that cast serious doubt on the most important time of the year for sales for a large number of companies.

JP Morgan Chase cut Q4 GDP estimates to 1.25% from an already low 1.75% on the same day the indices posted the biggest gains of the week. 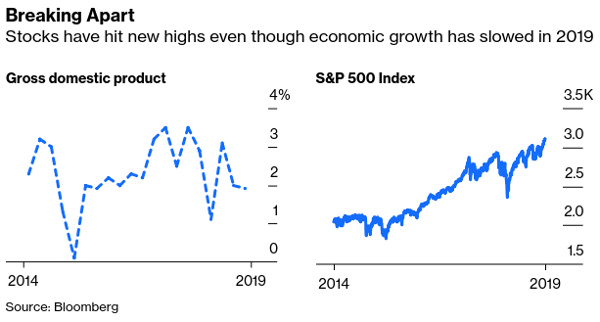 Gains based on what then? China trade talks that promise to roll back tariffs imposed from the top down by a President who says he doesn’t think rolling back tariffs is a great idea? And to levels they were at earlier this year.

Consider me unimpressed. If this is the catalyst for a flood of money into the stock market, we’re truly on our last, wheezing gasps of an overly optimistic run.

The S&P 500 is trading at 17.2 times last year’s projected earnings. This nosebleed valuation comes as the economy shows clear signs of being unable to support it.

Expectations are high, results are coming in low, and prices are rapidly climbing back towards the highest valuation — 18 times the previous year’s earnings — since the Great Recession.

What happened after that high point? A 10% drop.

Plus that was when GDP growth was over twice what it is now.

People don’t want to hear this. I know it is boring. It doesn’t feel like winning. Yet.

That isn’t to say that we have nothing to do but twiddle our thumbs and sit on the sidelines. The beauty of the markets is how wide they truly are.

Take a breather from pumping money into equities. Don’t run for the hills but don’t pay prices built on hype and short-sighted hope.

Look to safe havens that will see inflows during the inevitable backlash early next year. Gold miners are in a good position for another rally after a slight pullback.

And that is just in the short term. Long term, the gold industry is facing massive bullish trends, including depleting reserves, the strongest central bank buying we’ve seen in years, recapitalization, and M&A at hefty premiums.

With the broader market coasting purely on hope and in defiance of all the warning signs, start building positions based on real potential.

Bond Market Cracks, Gold Soars
The two main factors driving gold right now are the safe-haven status that the yellow metal provides and realization that we are entering a game of bond market/currency musical chairs which can only end one way because of math.
Investing in Marijuana Without Getting Burned
The marijuana industry has rewarded scores of investors with life-changing gains.