Warren Buffett: The Best Investment You Can Make

The Secrets of Dollar Cost Averaging

I know you've heard this quote so many times, it has probably lost all meaning.

It is all of those things. But most of all — it is absolutely true!

While every investor knows this old trope well, history shows that many rarely have the constitution to abide by it. When it comes to the stock market, people are not really rational beings; we are wild, reactionary beasts. We are slaves to the four main psychological emotions: fear, greed, hope, and regret. Of those, fear is by far the most powerful — especially when it comes to the stock market.

Just take a look at the 'Cycle of Market Emotions': 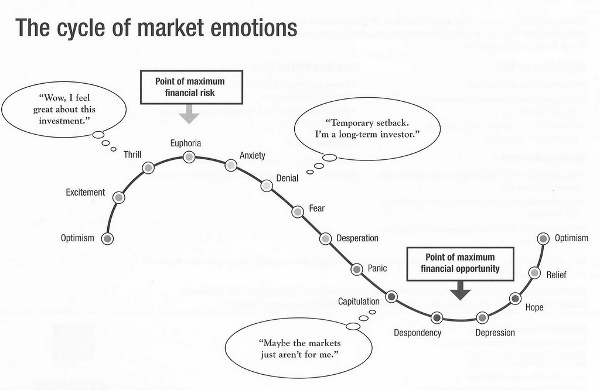 It's quite clear that if you are able to stomach the fear, desperation, and panic, you'll end up at the point of maximum financial opportunity, i.e. the single BEST time to buy stocks. Let's call it the “light at the end of the tunnel” phenomenon. And — as you'll see below — it's been backed up by market returns time and time again.

However, if you do cower and submit to your fears, you'll inevitably sell at the WORST possible time — completely losing your shirt in the process.

Now, with the specter of a significant market correction rearing its ghastly head, it is high time we start preparing for what to do when our portfolio gets its proverbial haircut. If you're prepared, there is simply no reason to fear or panic.

The one thing you shouldn't do is sell off all your stocks. Period.

Instead, we're going to take the advice of perhaps one of the best fear buyers known to man, and implement what Warren Buffett calls the “the best investment most people can make.”

You see, the truth is, most investors don't have the same stomach for buying on the collapse the way someone like Warren Buffett does. It's just not in their DNA. That's a big reason why we aren't all billionaires by now...

As Buffett once quipped: “Look at market fluctuations as your friend rather than your enemy; profit from folly rather than participate in it.”

If you start dumping your precious cargo overboard, you'll typically miss the most profitable part of the move: the inevitable reversal. That's where dollar cost averaging comes in.

It's a way for investors to ease into the market without having to predict exactly where the bottom is. After all, bottoms are impossibly hard to spot — even for brilliant investors like Buffett.

So what is dollar cost averaging?

It's really quite a simple strategy if you can keep your cool and ride out the storms. However, it does require a plan and the stomach to stick to it — especially if the markets continue to drop.

That's because the plan involves buying a fixed dollar amount of a particular stock, fund, or index on a regular schedule regardless of its price. That is usually where most retail investors generally fail because to a large extent they have it all backwards — they love buying the hype and selling the fear.

Even still, dollar cost averaging does make sense even though it often involves overcoming those same fears as stocks "go on sale".

The reason for this is simple. Using dollar cost averaging, more shares are purchased when prices are low, and fewer shares are bought when prices are high. The end result is that over time the average cost of your shares will become smaller and smaller.

Since dollar cost averaging spreads out your stock purchases, it lessens the risk that you will buy them "at the wrong time."

Instead, you arrive at an average price that typically reflects the true value of those shares.

Here's how it works in practice...

Let's say you decided to purchase $10,000 worth of a tried-and-true blue chip stock that had suddenly taken a plunge. Let's say, for example, that it traded for $50 on the day you decided to pull the trigger. Obviously, spending every penny of that $10,000 in one trade would carry a hefty risk along with it. If the bear market came rolling in you would be at an immediate loss with nothing left to buy more shares with. In short you'd be stuck with 200 shares at $50.00 a piece.

That is no way to safely grow your fortune...

You see, if you simply broke up that same purchase into four equal parts and scaled into your position during the downturn your average price would be much less.

Better yet, you wouldn't have to guess exactly where the bottom was along the way. And when the market turned — as it always does — you would be there to reap the benefits.

In the end, trying to time the bottom is a fool's errand.

Instead, you should be wading in one step at a time using dollar cost averaging as your guide — especially as the market heads downward. I'd even venture that you should be buying more when we hit new lows...

"If you buy equities across the board and you do it over time so you don't put all your money in at the wrong time … that's probably the best investment most people can make," Buffett once told a room of investors.

And history backs him up. Here's the chart to prove it... 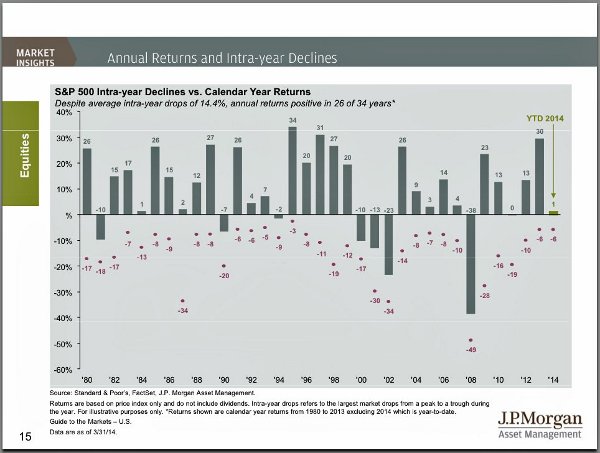 Keep this chart on your bedside table. Anytime you wake up dripping with sweat after a panicked, market-crash nightmare — and have the urge to unload your entire portfolio — just take a deep breath, pull out the chart and repeat "dollar cost averaging" over and over until you fall back to sleep.

Now, I'll be the first to admit that I've done my share of fear selling in the past. I'm human after all, and sometimes — gulp — I get scared! Since I know this about myself, I have made it a priority to set up a system that protects me from my more cowardly inclinations.

That is why I have set myself up with an IRM(72) account that automatically dollar cost averages my positions for me. So when the market tanks, I actually accumulate far more shares — at a much lower price.

If you've ever had that itchy trigger finger when the market starts going south, I urge you to open one too. Set it, forget it and cash in when the rest of the crowd gives in to the fear. You'll sleep easier at night — that much I know from personal experience...