The year is wrapping up and the markets are about to get really boring in the next couple weeks.

But as sleepy as the markets are now, they are going to be firing up at full speed as soon as they open on January 2, 2020. 2019 performance for traders is over. Everyone is starting at 0% yet again.

I know, no one is trying to add work and stress this time of year. I’m frazzled and trying to limp over the 2019 finish line, too.

But the next couple weeks are a great time to take a breather, hope politicians don’t ruin anything for us, and look at our best prospects to start 2020 in the black.

One in particular stands out with both short-term and long-term catalysts for profit — gold stocks.

I know it is a polarizing topic, but take an impartial look and you’ll see what it has to offer. Here is the case for making sure you own some gold stocks going into the new year.

We can get deep in the weeds here but we’ll keep this pretty succinct. We’ll go from the short-term, to mid-term, to long-term bullish catalysts for gold.

First up is something explained by Mr. James Dines over this past weekend, and I’ll let him explain it in his own words:

However, based on Dinesism #9 DIRGS (the Dines Rule of Gold Seasonality), the first quarter has been the best performing quarter for gold and silver stocks in the past 37 years.

Thus purchases made on weakness October through December tend to work out profitably. Gold and silver bullion have likewise performed best during the first quarter, with gold performing particularly well since the start of Wave II of the gold bull market in 2001.

A lot of this comes from tax-loss selling, considering smaller stocks take a bigger beating than mid- and large-cap stocks.

However, the rapid re-inflation of gold and silver stocks right after is a trend that can be banked on for a quick gain.

Next we have a mid-term catalyst which shows no sign of abating — investor demand through 2019.

Take a look at this chart. The correlation between stocks (represented by the S&P 500) and gold price remains mostly negative, but look at the price lines. 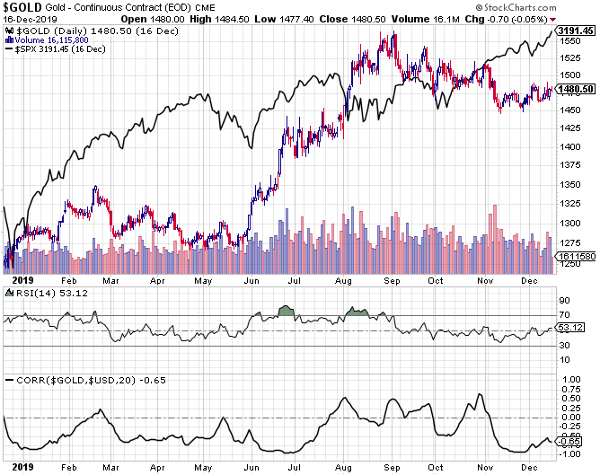 In spite of gold tending to go down when stocks go up, it isn't a one-to-one ratio. Gold is not going down as much as stocks are going up and is going up more than stocks are going down. Plus there were periods where both stocks and gold moved up in tandem in the second half of the year.

This trend is so strong that the price of gold is up a good $200 per ounce since the start of the year.

This is also supported through data. The Gold Investor Index — a measure of private investors starting or adding to gold holdings, rose four months in a row through November in spite of a pullback in prices.

Considering price momentum pushed gold into very overbought territory, a reversion to mean was bound to happen. Now, gold is at a neutral position that will support further price runs.

Overall, this is the best year since 2011 according to the Index — a year when $500 was added to the per-ounce price at the peak, and about $250 per ounce for the year.

This is a direct result of investors continuing to add to their bullish positions in a major way in spite of daily or weekly ups and downs.

Also of note for gold buying is demand from central banks. A full 20% of demand came from them, about the same as it was during the Nixon Shock that caused a global rush for gold as the last forms of gold-to-dollar convertibility and de facto price controls ended.

Finally, we have the long-term cannibalization of reserves. Gold producers are facing an existential crisis without massive investments in exploration or the companies that are finding the best new deposits. 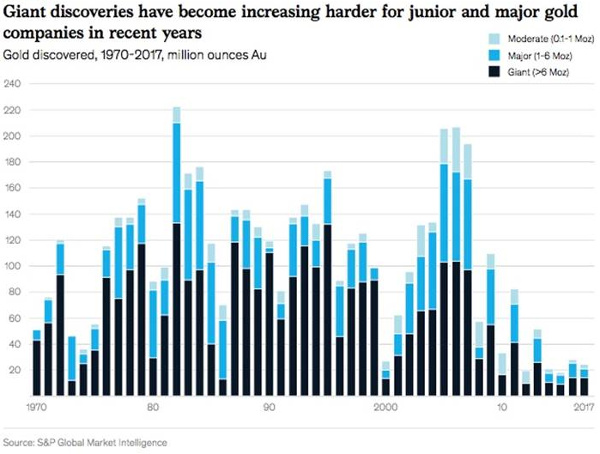 It takes a good decade on average of further drilling and development to get a new gold mine up and running and that average is only increasing.

This will create a squeeze on supply as demand is increasing while increasing the premium the major gold producers will have to pay to acquire smaller companies. It's a one-two punch.

2020 is looking to be a volatile year. Economic data is mixed. Stocks are expensive. Politics in an election year will only make things worse. The Fed is ramping up what is a fourth batch of QE in all but name as bank liquidity is looking increasingly weak.

Get a strong start to 2020 with an investment that has incredible potential in spite of all of this and over any time frame you choose.