U.S. Inflation at Highest Level in 13 Years… and Heading Higher

U.S. inflation soared in June to its highest level in 13 years, according to the Labor Department's latest core consumer price index.

Data released on Tuesday morning showed a 5.4% annual increase to core CPI. It was the biggest jump for the index since August 2008 and much higher than the 4.9% increase expected by analysts. On a monthly basis, meanwhile, consumer prices rose 0.9% in June.

Inflation has persisted higher this year after consumer prices collapsed in 2020 amid the COVID-19 pandemic. Prices for used cars and trucks, which plummeted last year, have ballooned by more than 10%. That accounts for more than a third of June's inflation jump.

Meanwhile, prices for things like food and energy are flying higher on material and transportation shortages, as well as suppliers seeking profit to compensate for last year's losses.

The Biden administration and Federal Reserve have continued to insist that inflationary pressures would ease before becoming a real problem for the economy.

For months Chairman Jerome Powell and other Fed leaders have been claiming that rising inflation is only “transitory” and have argued the central bank has “tools” to prevent any kind of hyperinflation-style event.

Critics have denounced the Fed's rhetoric as market pandering since inflation began rising earlier this year. But now many economists are seriously beginning to worry that rising inflation could persist for years to come. The Wall Street Journal wrote on Sunday:

Americans should brace themselves for several years of higher inflation than they’ve seen in decades... Economists surveyed this month by The Wall Street Journal raised their forecasts of how high inflation would go and for how long, compared with their previous expectations in April. The respondents on average now expect a widely followed measure of inflation, which excludes volatile food and energy components, to be up 3.2% in the fourth quarter of 2021 from a year before. They forecast the annual rise to recede to slightly less than 2.3% a year in 2022 and 2023. That would mean an average annual increase of 2.58% from 2021 through 2023, putting inflation at levels last seen in 1993.

The politicos have already been quick in pointing a condemning finger at their adversaries. Republicans are already blaming the rise in inflation on Biden's stimulus package. And Democrats are blaming higher inflation on Republican action. Same ole, same ole.

But at this point, it doesn't matter who is to blame. The damage is already done. 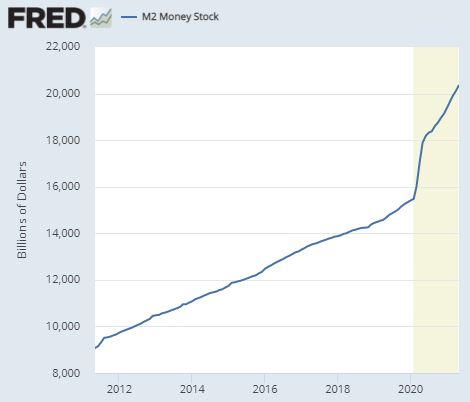 The Federal Reserve created more U.S. dollars (nominally) in the past 18 months than it did between 2013 and 2020.

It took the Federal Reserve 88 years to expand the supply of U.S. dollars to 5 trillion — it's added that much in the past 18 months! 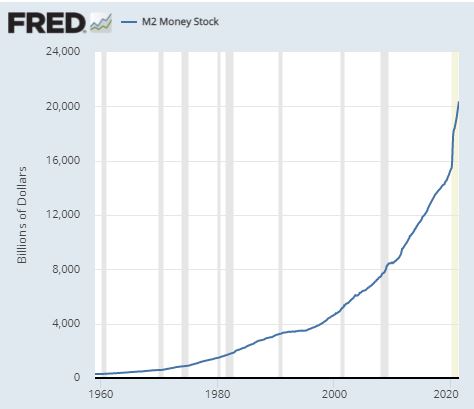 We're talking about an awful lot of new money. And all of this new money is adding, and will continue to add, to the rise in consumer prices nationwide.

According to the longstanding quantity theory of money, prices for goods and services are proportional to money supply. In other words, the more money that exists, the weaker the individual dollar becomes — aka inflation.

To combat inflation, investors have looked to gold as a safe haven for decades.

Gold's performance during times of historically high inflation has a mixed record. According to analysis by Amy Arnott, a portfolio strategist at Morningstar, gold prices shed 10% on average between 1980 and 1984, when the U.S. annual inflation rate was about 6.5%.

Yet between 1973 and 1979, with annual inflation averaging 8.8%, gold experienced one of its largest bull markets in history.

Despite a mixed historical track record, however, there are few other assets that stand up to inflation like gold. And there are even less that are easily accessible to regular retail investors.

For buyers now, though, physical gold bullion is expensive.

Investors today are paying an 8–10% premium for Gold Eagles, and some are paying even more.

The best way to get exposure to gold right now is via gold stocks — specificially shares of companies that explore for gold, construct and develop gold projects, and physically mine and process gold products.

I've recently put together a new report that details five small gold exploration companies that are well-positioned to take advantage of a major gold rush unfolding in Canada's Newfoundland.

You may have already heard about this gold rush in the news. A company named New Found Gold made a major gold discovery a few months ago and now everyone and their brother wants a property nearby.

There are today about two dozen public companies with significantly sized projects surrounding Queensway. And over the past several weeks I've slogged through every single one to cherry-pick five companies that are best positioned for repeated success. And I've put my findings in a new report published just a few days ago.

For more details on how to access this report for free, which gives the names and stock symbols of these five gold explorers, simply click here.