Trim the Leaves, Buy the Blood

I can’t possibly underscore how horrible this summer has been for me as a cannabis investor. It doesn’t get much worse than this...

I feel like Indiana Jones in the Temple of Doom, when the walls start closing in…

It’s one thing to try and catch a falling knife — it’s a far different scenario when you are trying to catch an entire room of falling daggers. In all of my years of covering cannabis, I haven't seen an entire sector pull back like this one.

The industry is going through a major shift and only the strongest of the cannabis companies will survive.

While it's never easy to watch your stocks take a hit, I treat myself to these opportunities like a kid in a candy store. I dollar-cost average my favorite long-term stocks, and I buy the ones that used to be too rich for my blood.

The industry has all been painted with the same bloody brush, which simply isn't the reality for many of the companies that are playing the long game, and have the cash and assets to weather it.

In fact, I have three cannabis stocks I'm buying that are no brainers after the summer bloodbath.

You can see the crash in the Horizons Marijuana Life Sciences Index ETF (HMMJ.TO) — which holds many of the same cannabis stocks that I do in my advisory services.

Here are the top holdings:

That fund is down over 30% since the middle of August: 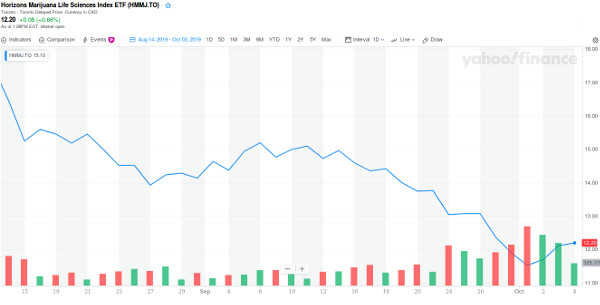 I like the old trope of buying "when there is blood in the streets", and it has typically been when I've done my best investing.

But enough of the doom, gloom, and bodily fluids...

The industry has already seen some massive breakthroughs this month. Canada is set to legalize edibles later this month. On October 17th, it will be legal to sell cannabis extracts in Canada. This is what we’ve been waiting for.

“The edibles market is estimated to be worth at least $1.6 billion a year in Canada, with cannabis-infused beverages adding a further $529 million,” according to Jennifer Lee from Deloitte.

“The introduction of cannabis-infused edibles will threaten the alcohol industry.”

That will be a boon to companies with beverage divisions.

We have also made some serious progress here in the United States...

That — in and of itself — is a huge step forward in allowing the industry to operate exactly as it should: as a legitimate business. The legislation would protect banks that service state-legal marijuana businesses from being penalized by federal regulators.

What’s more, the bill passed with broad bipartisan support. Almost half of Republicans voted with the Democrats to get it passed. It also has the support of over 50 state banking associations, the National Association of State Treasurers, the top financial regulators of 25 states, a majority of state attorneys general, and governors of 20 states, among others.

Once the U.S. federal situation becomes more clear, many of our U.S. positions will be in much firmer shape.

Every step helps... and if the SAFE Act passes in the Senate, that will be more like a leap.

Considering that 33 Republicans already signed on as co-sponsors, I'm counting on it...

Investors who have the constitution for the volatility of the short term and happen to pick the winners will be rewarded incredibly.

I spoke with one CEO about the recent turn, and he was quite frank.

"We’ll be looking back on this space, five years from now, and people will be laughing: How did I not buy                  when it was under a $2 billion valuation? It takes a strong stomach, but we have anti-nausea cannabis for that.”

I happen to have the stomach for it, which is why I just put together a report about my three favorite cannabis stocks that are trading at an amazing discount. I'm doubling down in a big way.

Now, I'm convinced that with any investment, you really need to be diversified. That's why I've taken trips all over the world to visit cannabis companies operating in different countries with different areas of expertise. In an area like cannabis, you need to spread those investments far and wide.

After countless hours in planes, greenhouses, and corporate offices, I've settled on my favorite three...

#1: The first involves a company with a massive 69-acre greenhouse in Colombia that’s on the verge of selling an estimated $175 million worth of medical marijuana each year.

#2: The second will allow you to profit from Canada’s legalization of cannabis-infused beverages which, according to the Minister of Health, will take place on October 17, 2019.

#3: The third deals with a company headquartered in Australia that is not only tapping into the growing hemp market but is also building a 60-acre greenhouse that will produce up to two tons of medical cannabis by as early as next year.

If you've never bought a cannabis stock before, now is the time. I couldn't dream up a better entry point for these stocks — in fact, I'm jealous that you'd be getting in this cheap.

But you be the judge.

Watch the three interrogations I conducted with the companies I mentioned above, right here.