You'll never look at a gas station the same way...

Have you heard the one about the atheist in the coffin?

“He's all dressed up with nowhere to go.”

That's exactly how I felt when I filled up my Jeep this week for an astounding $1.66 a gallon.

Normally, I would have been thrilled — Jeeps aren't known for being the most fuel-efficient cars around and my daily commute to work costs me a pretty penny in a normal week. But my giddiness quickly turned to despondence.

“Oh, right,” I told myself. “My daily commute now consists of the twelve stairs from my bedroom to the kitchen.”

Sure, I'll be making a trip to the grocery store here and there, but that one tank of cheap gas is probably going to last me a month.

I was all gassed up with nowhere to go...

While I thought I got the deal of a lifetime, compared to some other places in the country, I got hosed. A station in Cleveland was selling gas for 99 cents a gallon! 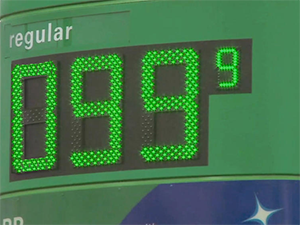 We haven't seen gas under a dollar since after the 9/11 attacks. But if you think a dollar for a gallon of gas is cheap, just take a look at what an entire barrel of oil costs...

The price of Western Canada Select (WCS) hit $4.18 per barrel, making it cheaper than a nice craft beer at a bar. (Ah, remember bars? Those were the days).

CNBC did the math and discovered that:

“A barrel of oil is 42 gallons, or about 5,400 fluid ounces. So if a beer were priced the same as WCS oil, the bottle would cost you about a penny...with tip.”

Western Canada Select isn't the refined Texas crude — it's syrupy and heavy and quite a bit cheaper than premium blends — but it typically sells for up to $15.

Brent crude — the benchmark — fell by more than 5% yesterday to US$28 a barrel.

Out of pure curiosity, I went to Alibaba to price out how much an empty barrel costs. I found a nice 55-gallon oil drum for $26. So it's almost as cheap to buy a barrel of oil as it is an empty one — and I am not even including shipping costs.

Prices could even hit negative territory as companies run out of room to store surplus oil.

That means that producers would actually pay someone to take the crude, rather than get paid for it. Because it’s so costly to shut down and then reopen a well, at these prices it is actually cheaper to simply pay someone to get rid of it and wait a few months for prices to recover.

It may be a risky move, because things could get worse before they get better...

The International Energy Agency just came out with a report that warns that the current global COVID-19 crisis could have a “severe and long-lasting impact on oil demand”, with expected drops of more than 9 million barrels per day in 2020.

"Even assuming that travel restrictions are eased in the second half of the year, we expect that global oil demand in 2020 will fall by 9.3m barrels a day versus 2019, erasing almost a decade of growth," according to the report.

“If oil goes any lower, ExxonMobil will have to start firing Congressmen,” a colleague joked to me this week.

The entire situation has given oil a black eye and displayed just how volatile and dangerous our reliance on it is. So while the price of oil will eventually come back, and we won't be paying a dollar a gallon for gas, we'll still be stuck with the geopolitical and environmental miasma of the gurgling crude.

That's why I'm betting on the bright future of energy, not the ugly past...

I recently visited a “blue gas” station that makes 99 cents a gallon for gas look like highway robbery.

Right before travel bans took over the country, I took a trip to the California coast to take a test drive of a brand-new vehicle that puts both internal combustion engines and traditional electric vehicles to shame.

It runs on a special type of fuel that is completely clean, zero-emission. This car uses one of the most abundant resources on the planet, one that is 300% more powerful than oil.

And no, I'm not talking about a Tesla that takes hours to charge. In fact, in just one minute you can pump your tank full... and drive for weeks without refilling.

And it isn't a slave to the wildly fluctuating oil markets.

You can watch my trip to the gas station of the future right here.