Well, it happened with the SECURE Act. On the surface, the bill in question seems like a no-brainer.

Look under the hood, though, and you’ll see what is really going on.

While parts of it may help, the real push behind this is undoubtedly setting up the financial industry to secure itself a bigger slice of everyone’s pie.

In yet another groan-worthy backronym, the Setting Every Community Up for Retirement Enhancement Act does have some good stuff in it.

Make no mistake, though. The parts that are good for the people are window dressing. The real purpose is to enrich the well-entrenched rent-seeking side of Wall Street.

In all, there are 29 provisions in this bill. I don’t want to lose everyone by going through them all. I don’t even want to write them all down.

Instead, let’s look at some of the big stuff that is most likely to affect you or people you know.

Somewhere around 42% of Americans in the private sector do not have access to a retirement plan. This Act could change that by offering very modest ($500) tax credits to small businesses to set up automatic enrollment plans. It would also allow them to band together within limits.

It would require 401(k) statements to include lifetime income stream disclosure figures — basically an estimate of what you’ll get down the road with what you’ve got now.

It also moves the required minimum distribution age from 70.5 to 72, which really only affects people who are very well off to start.

It forces inherited IRA accounts to fully distribute funds within 10 years. This is a tax-generating ploy that will force non-spouse heirs to pay far more since they cannot stretch the IRA out over their lifetime.

Now, let’s look at what I see as the real reason this is being pushed through Congress.

There are three big things here that are clearly designed to funnel retirement fund managers and providers a whole bunch of money.

The first and second are closely related — the automatic enrollment option and expansion to part-time workers and smaller companies.

On the surface, the tax credit appears to defray costs, but that automatic enrollment and deduction system broadens the base of workers that plan managers and providers can tap into for high-fee, underperforming funds.

Expanding access to part-time and low-wage workers seems like a great idea, too. It may just help some people. But on the whole I don’t buy this at all, and anyone with even the most basic idea of what's going on out there shouldn't either.

Wage growth is a multi-decade problem. Something like a quarter of workers make less than $10 an hour. 40% of Americans don’t have $400 in the bank for an emergency.

I see no version of this where those automatically withheld funds that are exclusively allowed by the tax credit for small companies are not tapped, with large penalties going to fund providers and the tax man.

Finally, we have the addition of annuities to retirement plan options. It would be great if they were simple annuities. Those won’t be what are offered. Instead, the push will be to sell high-fee variable annuities or indexed annuities.

The devil is in the details with these things.

There are penalties for early withdrawals from these, independent from retirement plan penalties.

There are mortality, expense, and administration fees. There are management fees imposed by sub accounts, fees for additional features, earnings caps, and tax deductions.

All told, current variable annuity averages can run between 2% and 5% per year before taxes.

You’ve probably seen a chart like this before, and you should always think about it whenever you see any changes coming along. 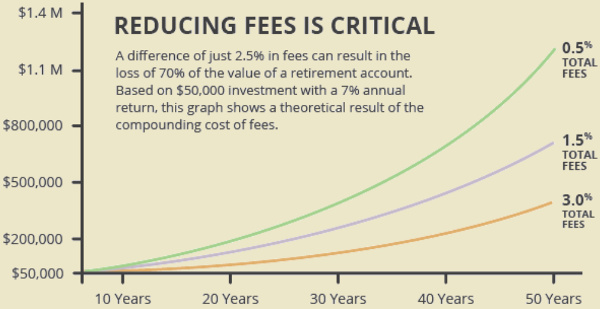 Make no mistake about it. The underlying purpose of this legislation is a cash grab. More people paying more fees regardless of any actual benefit to them.

The massive financial institutions want to keep you on that bottom line and siphon off your wealth. You have to stay as close to the top line as you can to get ahead.

Politicians, at best, are woefully ignorant. At worst, they don’t care about throwing us under the bus for their buddies who bundle fundraising for them and feed them canapés and champagne.

We are on our own when it comes to protecting our wealth by avoiding these wealth-destroying percentage-fee traps, and the stakes couldn’t be higher.