They'll Steal Your Savings, Too

Cyprus Isn't As Far From Us As You Think...

This week began with a flurry of conversation about where the Eurozone bureaucrats in Brussels could have possibly found the raving lunatics who think a sudden 10% tax on savings is a good idea.

Officials from Cyprus paid a visit to the European Central Bank, hats in hand and heads bowed, willing to do anything to salvage their banks (as well as their national economy). What they left with with was so revolting, it sent shudders through the global financial world...

The officials representing the 17-nation EU forced a 10% tax on existing bank deposits, a 20% to 25% tax on deposit interest, and a massive increase in Cyprus' GDP-to-debt ratio in exchange for a bank bailout.

How would you react to this news if you had any money in Cypriot banks? Would you be running to the bank to yank your cash from the vaults? Too bad the news came on a bank holiday. At least you can pull a large chunk of it out through ATM transactions before your bank flags all the withdrawals as fraudulent and freezes your card... Well, no. You can't. The bureaucrats in Brussels beat you to the punch: They tried to base the figures off account balances that existed as the agreement was finalized, before the announcement was made.

The only thing Cypriots could do is voice their outrage. Thankfully, Cyprus' legislature listened to their people and worldwide condemnation by rejected the deal yesterday afternoon.

Of course, now the president of Cyprus will have to scramble to secure another deal before the banks and his nation default. The clock is ticking and there is very little time left. The head of negotiations with Cyprus warned that the ECB would pull the plug on the banks unless the country took a bailout very quickly.

I've heard some smug and distant comments over the past few days: “Thank goodness we don't live there,” or “That would never happen here...” People are viewing the situation in Cyprus as if it were hypothetical, as distant to the financial duress in the United States as the island of Cyprus is from our shores.

But that's simply not the case. People need to wake up to realize the ends justify the means when it comes to taxation and finance.

This is a rigged zero-sum game wherein the politicians and central bankers determine the outcome. And just so we're clear: You and I are the linchpin of the 'means' part of this zero-sum equation.

Sure, deposits seem sacred when it comes to taxes. After all, double taxation is a horribly disingenuous way to handle government revenue, and this form of taxation removes incentives for creating savings in an era where far too many haven't (or can't) save enough.

But the rights and wrongs of how and what to tax are all semantics. The government is constantly picking how and where it chooses to skim from the top. To make life easy for itself, it normally picks something palatable. Income taxes are a perfect example...

Say you receive a $750 paycheck. You don't actually see the $1,000 you earned from your employer, because you have to turn around and hand $250 to a third party that's forced itself into the agreement. (And you have to look for the tiny table at the bottom of your pay stub to even notice this is happening, because we all know there are few memos going around explaining these new policies.)

There is nothing stopping the outrageous aspect of the Cyprus bailout debacle (i.e. retroactive taxation) from happening here at any time. No laws would prevent this from taking place on American soil.

In fact, the Supreme Court unanimously ruled in 1994's U.S. vs. Carlton decision that retroactive taxation is not unconstitutional: Congress passed a bill that applied retroactive taxes on equities owned by an estate well after the newly-taxed transactions occurred.

Like it or not, virtually everything we have — savings, income, property, and shares — is considered part of the government's kitty.

For right now, the U.S. government is content with skimming from certain places to make ends meet, so Americans feel safe making deposits because they haven't been taxed in the past... but that's only because the government hasn't felt the need to make a bald-faced grab for them yet.

That could change any day now.

In recent years, our government has done everything except put a direct tax on your savings account to bail out the too-big-to-fail banks and protect reckless overspending under the guise of creating jobs and economic recovery.

Part of the deal between the ECB and Cyprus involved giving bank shares to people in exchange for the savings that were going to be forcibly stolen. Sound vaguely familiar?

Well, the U.S. bank bailout several years ago was almost exactly the same as the proposed Cyprus bailout: The U.S. government used its citizen's money — against many objections — to buy equity in banks and financial institutions under highly favorable terms.

The U.S. government used our money to prop up debt-choked banks that couldn't get lines of credit for us and it took tanking bank shares in exchange. Unlike the tiny nation of Cyprus, it could pull this off by essentially borrowing against our future income without becoming completely illiquid or being crushed by unmanageable interest.

Our politicians were able to slip the nature of the deal past a vast majority of the people it forced it upon; the Cypriots just didn't have enough wiggle room to avoid telling the naked truth about their motives. In both cases, U.S. and Cypriot officials did the bare minimum to bailout too-big-to-fail banks — at the common man's expense, of course.

Of course, without the massive boom in the decades preceding the bailout and some painful austerity going forward, this was a one-time deal. Without our currently unsustainable spending, there is no way we could replicate it.

Many economists wondered how Cyprus could handle any deal because the nation's debt-to-GDP ratio will hit 140% if it assumes responsibility for the amount of the bailout the ECB proposed.

We're on pace to get there within a couple decades — that is, if we can avoid another financial meltdown, added investor and consumer panic, and the government's estimates worsening each year: 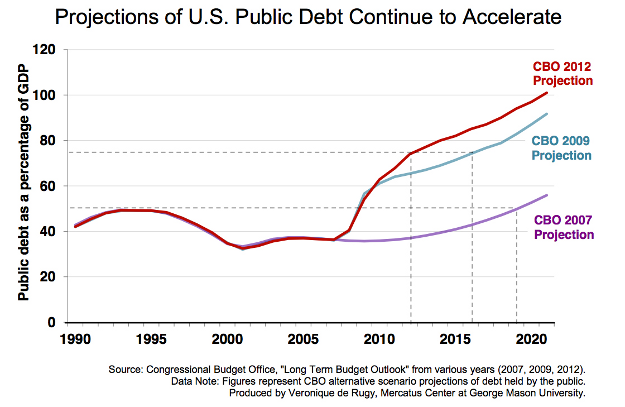 We're already experiencing unprecedented market and economic manipulation that has destroyed the incentive to save by killing interest rates. And we're being forced into equities and bonds to create any kind of return, even just to keep up with inflation.

The broad consensus that allowed the TARP program to go flying through Congress and the Senate is gone as well. The legislative branch can't even agree to continue paying what is due on what they previously spent. Imagine Obama asking for another $700 billion dollars in debt for a bailout today...

There's no way to hide anything in the Federal Reserve's balance sheet, which just passed the $3.1 trillion mark and is now enough to cover the total federal budget of 2009.

We can still take some comfort, albeit a cold comfort, in the fact that we're not (currently) facing the same situation.

However, I have no doubt that another banking crisis could easily lead direct raids on the wealth and savings of American citizens, and that the odds of such an event are increasing by the day... 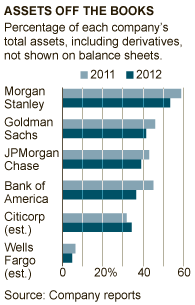 Too-big-to-fail banks have only gotten larger since the recession, and their balance sheets don't even reflect reality and the risks they continue to take.

Using U.S. generally accepted accounting practices (GAAP), the banks don't even have to declare huge amounts of their assets and holdings (such as the derivatives that are largely responsible for getting us into this mess).

If you take those undeclared assets into account by using the International Financial Reporting Standards (IFRS), the total assets of a mere eight banks are as large as the entire U.S. economy. These assets can easily turn into massive losses. We've seen banks fail to handle the risks they are taking time after time.

Thomas Hoenig, the vice chairman of the Federal Deposit Insurance Corporation, calculated the adjusted tangible equity to adjusted tangible assets ratio using the GAAP and IFRS methods and found that they are abysmally low.

Under either set of accounting rules, all of the ratios are in the single digits.

Only a few years back, our government went to the brink of what Cyprus is being forced to handle now. We are too weak to do it again. With bank risk still untenable and banks getting bigger in spite of the Dodd-Frank rules, our savings may end up being stolen, too.

So when you look at Cyprus' attempt to plunder its citizens' savings, don't dismiss it as some extremist method with a socialist tilt. It's important to view it as it is: a desperate move.

The way things are going here in the U.S., we may be one recession or banking crisis away from having our money stolen by thieves in a bureaucrats' conference room.

Adam English for The Outsider Club