These Dweebs are Richer Than You

I’ll be the first one to tell you that I missed the first cryptocurrency boom.

It’s one of the worst investing decisions I never made, and I don’t intend to make the same mistake again.

It wasn’t that I didn’t know about crypto, I just didn’t understand it. And rarely — if ever — do I invest in things I don’t understand; sometimes to a fault.

This was back in January 2011, and I had already heard rumblings about how the blockchain would change the face of currency altogether. I read about the disruptive technology that would take over the world — replacing traditional banking and ushering in a completely new paradigm for how we make monetary transactions.

It was all very heady stuff.

As a natural skeptic of the current monetary system, many of the arguments I heard for a decentralized currency were all very compelling. I liked it.

But here’s where my own personal bias came in: most of the people telling me about it were die-hard dweebs.

They spent their time in dark basements jumping between Internet chat rooms and playing World of Warcraft while I tended to spend my time outdoors, playing guitar, and socializing with humans that I can actually look in the eye.

But I call myself an absolute fool.

Had I just listened to the dweebs, I would be so stinking rich that I wouldn't even have to write to you today...

In any case, a well-versed tech friend of mine — some would even dare to call him a “dweeb” — was shouting about Bitcoin from the hills. He practically begged me to put $100 into it. At the very least, he said, it’s a hell of a lottery ticket with much better odds.

Had I bought that “lottery ticket”, I would have been sitting on a life-changing fortune right now. Here’s a painful look at how much money I’d have right now if I had the testicular fortitude of the nerds: 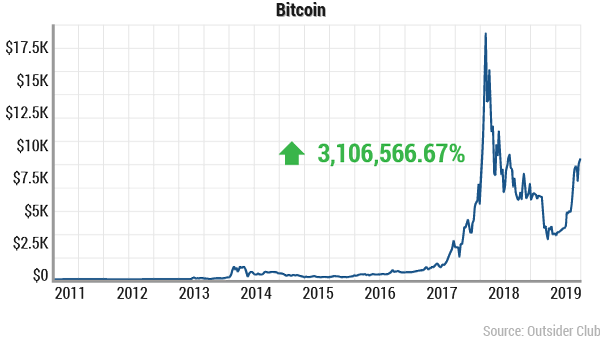 I don't even want to look at the chart at the top — my fragile non-dweeby brain might explode.

If I had simply dropped a $1,000 bet, I assuredly wouldn’t be writing you today: I’d be sailing the world, buying up islands, sipping coconuts, and never sitting in front of a computer screen again.

But today, it’s not enough to just put a few bucks in Bitcoin. Or Litecoin, Ethereum, Dash, Ripple — the list grows every day.

Now, you actually have to know what you’re doing...

The crypto market reminds me a lot of the early days in the cannabis space.

When I started covering cannabis in 2014, it was the Wild West. Companies were popping up every day — much like new cryptos are today — and it was near impossible to separate fact from fiction.

I honestly didn’t know who to trust. So I did something drastic. I drove to Smiths Falls, Ontario to tour a cannabis company with my own eyes. At the time, it was called Tweed, but you probably know it as Canopy Growth Corp. (NYSE: CGC).

It is now the largest cannabis company in the world.

I had read about it online and did all the due diligence that I could, but without actually seeing the process for myself, I would have never had the confidence to recommend it to my readers. There was simply too much garbage in the space at that time.

But after touring the facility in person, I knew that this wasn’t a fly-by-night operation. I came back invigorated and recommended it to my readers at once. The ones who shared my enthusiasm have banked up to 3,200% since that trip.

Unless I did the boots-on-the-ground research, I may have missed out on the cannabis boom out of sheer naivety.

My colleague Nick Hodge has the same philosophy. He’s always been a crypto skeptic — until he spent hours on a plane to Swedish Lapland, visiting an unknown company stationed 37 miles from the Arctic Circle.

What he found there changed his mind about crypto forever… 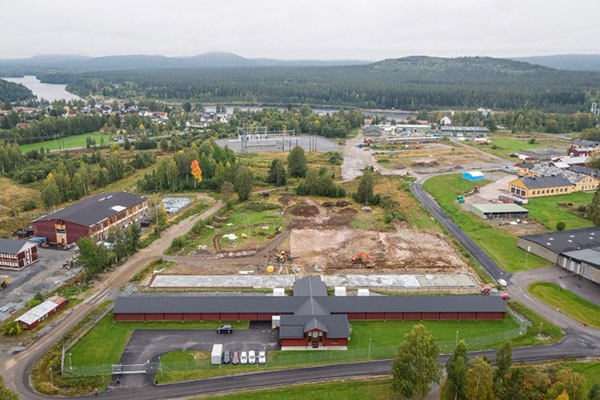 This location will host 41,000 high-performance computers... each one capable of 14 TRILLION calculations per second.

What is it doing? Printing tons of cryptos with the ease of an old newspaper factory. It is literally printing money 24 hours a day, 365 days a year without interruption...

43 newly-minted bitcoins a day, to be precise.

It's the best picks-and-shovels play I've ever seen.

But Nick has done the research and taken the trip. I'll let him explain what he found, and why it's better than blindly buying the hottest new coin this week.

You can check out footage of what he discovered here.

I'm mostly impressed because — he's not even a dweeb! Unlike me, he just knows the right time to listen to them...

Five Reasons Bitcoin Is Here to Stay
Five reasons Bitcoin is here to stay... and the one way to play it. Outsider Club founder Nick Hodge discusses a unique opportunity involving cryptocurrencies.
How to Work the “Cycle” and Come Out Ahead
One of the very first lessons I learned in investing was about “cycles.” Commodity cycles, to be precise. If you want to do things the right way, then here’s where you should be looking right now…
It's Time to Buy Bitcoin Again
Bitcoin is gearing up for another epic run and it's time to buy again. If you’ve been reading my work for any length of time, you know that’s a statement I don’t make lightly...
Investing in Marijuana Without Getting Burned
The marijuana industry has rewarded scores of investors with life-changing gains.