Today we're bringing you an excerpt from The Wealth Warrior from Jason Simpkins.

While people focus on big-ticket items like the new F-35 and Reagan-class aircraft carriers, a tech revolution is underway in the security sector that will radically redefine how we maintain safety and strength in an increasingly digital future.

Read on for a list of the top 10 developments of the last year from Dr. Alexander Kott, chief scientist of the U.S. Army's CCDC Army Research Laboratory.

The U.S. Army's CCDC Army Research Laboratory is one of the nation’s premier technological incubators.

And recently, the lab's chief scientist, Dr. Alexander Kott, revealed what he believed to be the top 10 coolest and most impactful developments of the past year.

Here is his list, and an invaluable look at the future of warfare... 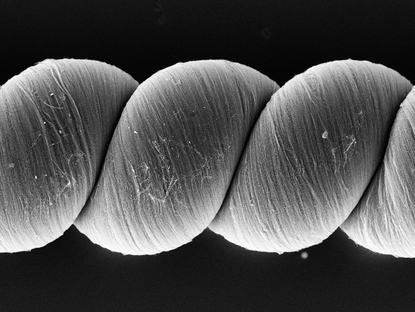 When you look at a robot, what you typically see is a metal skeleton. But if these humanoids are ever going to accomplish the same tasks as people, then they need something else…

And they may soon have them, thanks to advancements made at the ARL.

Working with a visiting professor from a prestigious engineering school, a team of scientists was able to twist and coil plastic fibers into a spring. They then applied various stimuli, which caused the spring to expand and contract the same way a muscle would.

These synthetic muscles could be used to augment robot performance, enhancing their strength and flexibility.

In the past, we’ve talked about the development and application of exoskeletons — artificial frames that enhance a soldier’s physical capabilities. But in addition to making soldiers stronger, exoskeletons also monitor troops’ locations, speed, heart rate, and even hydration levels.

Well, tracking soldiers’ health and performance in real-time is indeed a priority. The sensors could pull a wide variety of data from blood, sweat, and saliva. And they could also be used to monitor the environment for bio-threats.

"The Army will need to be more adaptive, more expeditionary and have a near-zero logistic demand while optimizing individual to squad execution in multifaceted operational environments," said Dr. Matt Coppock, chemist and team lead. "It can be envisioned that real-time health and performance monitoring, as well as sensing current and emerging environmental threats, could be a key set of tools to make this possible."

Army researchers and their partners at the University of Maryland and Johns Hopkins Applied Physics Laboratory have developed a new, water-based and fire-proof battery.

"Our project addresses the risk by allowing high-energy or high-power batteries to be put on the Soldier with no risk of the batteries catching on fire," said Dr. Arthur von Wald Cresce, an Army materials engineer. "We're hoping that by designing safety into the battery, this concern goes away and Soldiers can use their batteries as they please."

Now, let’s say those batteries run out of power…

What if soldiers on patrol find themselves isolated and cut off from their base, hunkered down in the desert without power.

Well, in that case, Army researchers are developing a structurally-stable, aluminum-based nanogalvonic alloy that reacts with any water-based liquid to spur hydrolysis, and thus generate power.

"Imagine a squad of future Soldiers on a long-range patrol far from base with dead batteries and a desperate need to fire up their radio," said Dr. Kris Darling, Army materials scientist. "One of the Soldiers reaches for a metal tablet and drops it into a container and adds water or some fluid that contains water such as urine, immediately the tablet dissolves and hydrogen is released into a fuel cell, providing instant power for the radio."

In fact, fuel cell technology is getting a whole lot of interest across a wide range of civilian uses too.

It seems like we’ve been waiting for 3D printing to be incorporated into the military for years, but its applications have been limited

However, a new breakthrough could change that, as Army researchers have developed a way to 3D print ultra-strong metal parts.

With a method called Powder Bed Fusion, a 3D printer's laser selectively melts alloy powder into a pattern. The printer then coats the build plate with additional layers of powder until the part is complete.

The end result is a piece of steel that feels like it was forged traditionally, but has intricate design features that no mold could create. It’s also 50% stronger than anything commercially available.

This capability has the potential to replace parts of today's tanks, or support future, state-of-the-art systems.

"I think it's going to really revolutionize logistics," said Dr. Brandon McWilliams, an Army team lead. "Additive manufacturing is going to have a huge impact on sustainment…instead of worrying about carrying a whole truckload, or convoys loads of spares, as long as you have raw materials and a printer, you can potentially make anything you need." 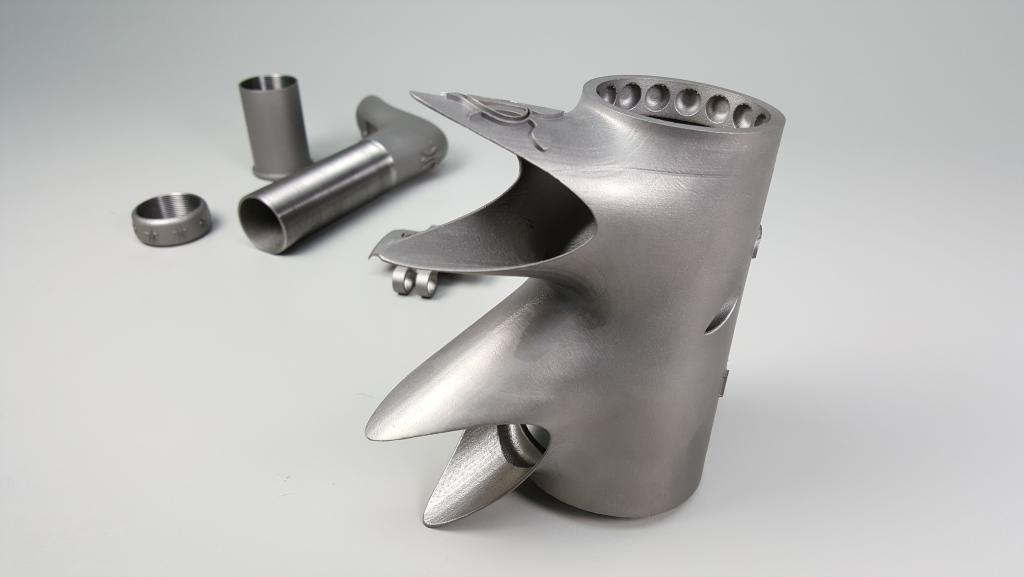 One thing the Army is always seeking to improve is training.

It’s incredibly difficult to simulate real-life combat, so anything that helps in that arena is a plus.

That’s why the Army is working on a “human interest detector” that can track brainwaves and neural responses to assess what captures a soldier’s attention in environments with multiple stimuli.

Basically, the technology literally gets in the head of a soldier. This could aid in training and enhance situational awareness on the battlefield.

The scientific method has led to humanity’s greatest discoveries, but it also takes time, countless tests, and even a little luck.

So while human scientists will always be relied upon to make new discoveries, they could be vastly aided by artificial intelligence.

To that end, Army-funded researchers at Cornell University developed a system called CRYSTAL to explore new materials for long-lasting power for soldiers. CRYSTAL relies on a collective of algorithmic bots that sift through hundreds of thousands of combinations and elements — a number so vast that it's inaccessible through traditional experimentation.

The system is able to obey the laws of physics and chemistry — where existing machine learning approaches fail — and could identify the next generation of material breakthroughs that will equip soldiers on the future battlefield.

"The exciting part about basic science research is you can't always predict where the results will lead," said Dr. Purush Iyer, division chief, network sciences at the Army Research Office. "We funded this research to better understand collective intelligence (wisdom of crowds). While material science application, such as design of novel alloys, were always on the cards, the serendipitous nature of the eventual outcome, that of a catalyst to aid in designing better fuel cells, is solving a problem of immense importance for the Army — battery power in the field — shows the importance of investing in basic research."

Reliable communication is an ever-present challenge on the battlefield.

These lines can always stand to be improved.

And so, an Army research team has developed a new way to send directional radio signals in physically complex environments.

The team designed small robotic platforms with compact, low-frequency antennas and AI to create a system that adaptively self-organizes into a directional antenna array.

A robot with a compact, low-frequency antenna coordinates with other robotic teammates that have passive unpowered antennas which help focus the electromagnetic field in a desired direction. Add more robots and the array becomes more focused and has increased range and reliability.

This enables robust and targeted wireless communication at increased ranges through buildings, and in challenging urban and subterranean environments.

I recently mentioned that the Marines and other branches of the military were working on “reactive armor.”

Tanks, for example, could be digitally connected through their armor, relaying information about the direction and nature of incoming fire, and even patching their own damage.

Well the ARL has taken that up a notch, 3D printing a reversible cross-linking epoxy that is self-healing at room temperature without any additional stimulus or healing agent.

The unique chemistry of the material even enables it to be programmed to morph shape when stimulated with temperature.

Army researchers are exploring whether these materials could create reconfigurable Army platforms of the future that could morph shapes on-demand, like Transformers. 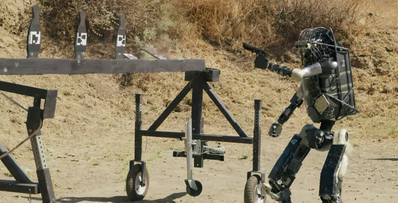 I don’t know how many times I have to say it, but we’re inching toward a future where robots do our fighting for us.

As we speak, Army researchers are developing new algorithms and capabilities that are unseen in industry. They’re building robots capable of operating in unknown environments such as future battlefields.

These algorithms are creating the brains of robots, to equip them to interact with unforeseen objects and in unknown scenarios, ultimately preparing them to partner with soldiers on the future battlefield, whatever it might look like.

And that concludes the top 10 technologies currently being developed by the CCDC Army Research Laboratory. This, according to the lab's chief scientist, Dr. Kott.

As for my part, I’m looking at all of these things and more for future profit opportunities.

I’ll let you know as soon as I find the latest.

Investor Alert: A “Shocking” Scientific Breakthrough
At this point, most people seem to understand that clean energy isn’t just the future… It’s the present. Outsider Club editor Jason Simpkins explains how investors can get in on the latest clean energy trend before it's too late...
Heal Your Ailing Portfolio Body