The Vanguard of the Security Revolution

On this day 230 years ago, George Washington stood on the balcony of the then New York City Hall on Wall Street and was sworn in as the first elected President of the United States.

A crowd formed in the street. President Washington started the tradition of the inaugural speech and kissed the Bible on which he took his oath. Fireworks bought by the citizens in attendance lit up the sky to celebrate.

Here is how the scene was later depicted by Ramon de Elorriaga in a painting kept on the same site, now known as the Federal Hall National Memorial: 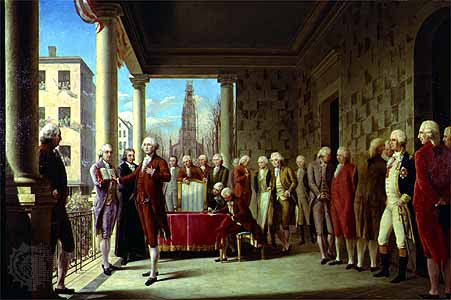 Inaugurations don't look all that different today. More honorary guests pack in behind the President in seats. Nearly transparent teleprompter screens and microphones clutter the foreground and formal clothing has certainly changed, but that's about it, really.

But while the cameras stay focused on a narrow shot of the stage that strives to maintain our country's earliest traditions, everything else outside of the frame has changed beyond recognition.

Layers of security envelop the event for blocks on the ground and miles in the air.

A fleet of armored cars stay on high alert nearby, along with another fleet of military helicopters a bit farther out.

Warplanes patrol far above in a no-fly zone. Electronic surveillance and countermeasures monitor for threats.

A small army of uniformed and plain clothes police, federal agents, and military personnel constantly monitor the area for any threat.

Like it or not, the world has changed. What it takes to maintain security and civility has changed with it.

It certainly isn't just celebrated government events. For blocks around Washington, D.C.'s government buildings there are guards, hidden heavier defenses, and cameras that remain active at all times on all days.

Transportation hubs, court rooms, stadiums, schools, and just about any other place you can imagine are installing or upgrading these layered security systems as quickly as budgets allow.

Casinos perfected the use of video surveillance decades ago. I was talking to a friend yesterday who told me that Disney now requires all “guests” to provide fingerprints and wear RFID wristbands.

Mobile phone carriers secretly comply with warrants and tracking information. The Federal government trains local police on how to use Stingray devices to capture and track all nearby devices in real time, and thus the people who carry them as well.

The simple fact of the matter is that your data is being archived somewhere. Also that, if you are in a crowded area, commercial or public, you are being recorded and a person is behind the screen watching.

We're seeing the deployment of technology on an unprecedented scale, but by design it is being done as quietly as possible.

That is probably why Wall Street hasn't caught on to a company with a massive technology advantage that will become the vanguard of future security.

No matter how many cameras are installed, they have a problem — they are only as good as the people behind them, and they are pretty much useless.

It isn't their fault and no one else could do any better. They can't look into a crowd and see a problem before it starts. No one can.

So instead, we use the same tricks we always have — an overwhelming presence and the threat of force. Guards, police, guns on hips on every corner. We hope it creates enough fear to suppress any homicidal maniac. Too often it does not.

The company the Outsider Club's own Jason Simpkins has uncovered has found a solution to that problem.

The trillion-dollar market for security is about to fundamentally change. Make sure you know about the company that will be at the heart of it.

“Get Down on Your Knees Like You Used To!”… And Other Things You Shouldn’t Yell
“Get down on your knees like you used to!” Those were the words shouted at Oklahoma City Thunder point guard Russell Westbrook. Here's how the offender will be banned kept out of the stadium for life...
You'll Never See It, But It's Always Watching
The next time you catch a flight out of the country, your face may end up in a government database. Outsider Club contributor Ryan Stancil discusses an up and coming technology...
Mr. Dines: Finding Future Stock Market Leaders
Our laser focus is on future leaders, not yesteryear’s. The real challenge, visible to few, is to locate the winners in those groups before they appear in the headlines, at which time we should be selling on the news that we had been predicting was coming.
Heal Your Ailing Portfolio Body