The USPS Just Ordered 50,000 Next-Gen Mail Trucks and They're the DUMBEST Things You've Ever Seen

Why do we hate mailmen so much? What have America’s mail carriers done to deserve such disrespect?

We've mandated these folks deliver mail to us six days a week. And we expect them to do it despite any and all weather conditions. 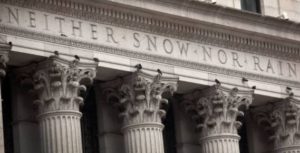 Mail carriers have to make anywhere from 200 to 800 delivery stops a day. Each delivers thousands of letters, packages, and mailers every single day. And if a single postcard gets lost, we freak out.

Meanwhile we force them to complete this Herculean task while wearing uniforms that seem more uncomfortable than prison jumpsuits. Postal uniforms are made with polyester, which is essentially a petroleum-based plastic. It doesn't keep you warm in the winter. And it doesn't keep you cool in the summer. This picture is from the official USPS uniform guideline: 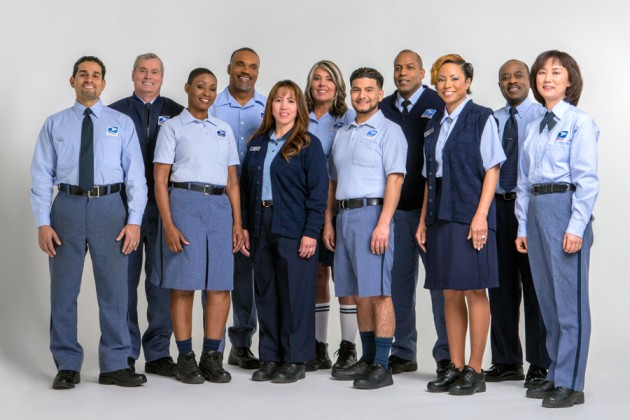 Not a single person pictured here looks happy about any of these uniforms.

And now, I guess just to add insult to injury, we’re going to make them drive around in this goofy-looking contraption: 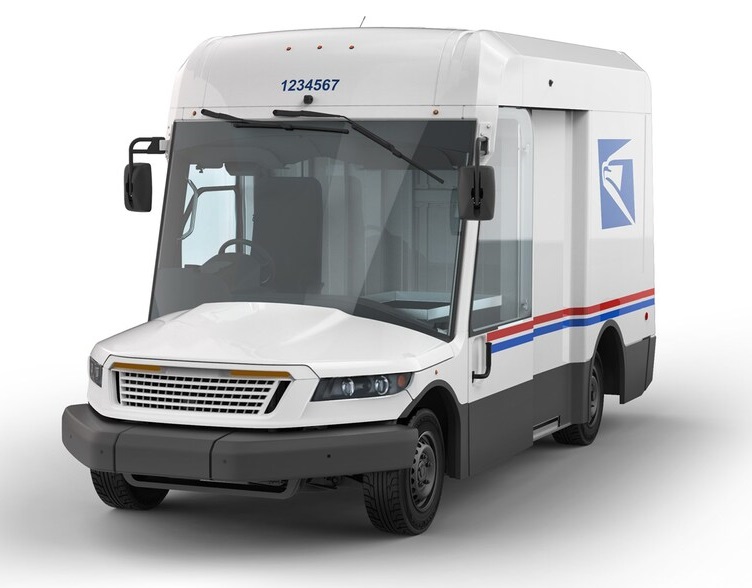 You’re looking at the USPS Next Generation Delivery Vehicle (NGDV).

And no, it’s not a joke, this is what the next generation of mail delivery trucks will look like. It reminds me of the 1990s cartoon character Duckman, seen below:

Three weeks ago, the USPS placed an order for 50,000 of these next-generation mail trucks from manufacturer Oshkosh Corporation (NYSE: OSK) at a cost of almost $3 billion. They are expected to hit the road next year.

The NGDV mail truck will serve as a much-needed replacement for the Grumman Long Life Vehicle (LLV), which we know as the standard mail delivery truck today. 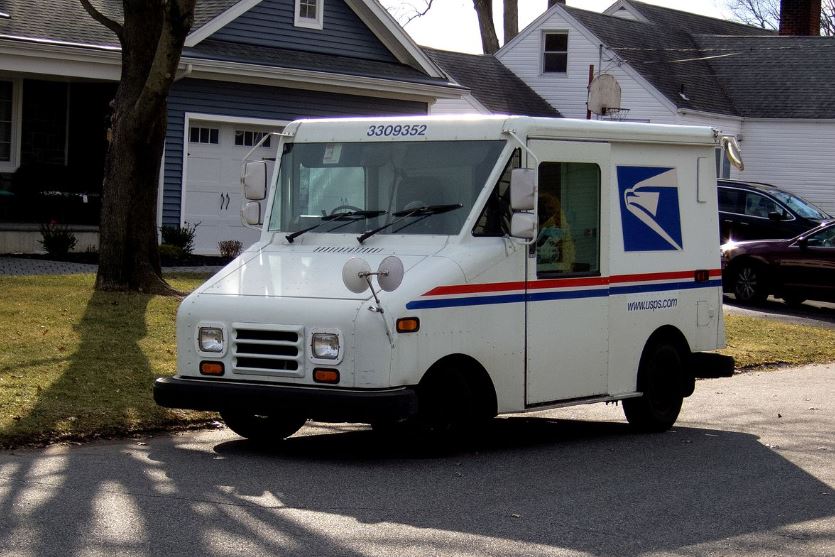 As the name implies, the Grumman LLV was designed to have a long lifespan. The LLV was originally designed for a service life of 24 years, and later extended to 30 years.

But the LLV was first manufactured in 1987, with production continuing through 1994. That means the newest mail truck on the road right now is 28 years old, well past the LLV's original service life.

The USPS says today the average age of its LLV delivery fleet is 25 years old and is “near or beyond its designed useful life.”

The Postmaster General and USPS Chief Executive Officer Louis DeJoy says, “Many of our 190,000 delivery vehicles on the road are more than 30 years old and lack basic safety features which are standard in most vehicles today.”

He’s talking about basic features like braking and traction control, air conditioning, and air bags. But aside from the lack of these basic features, the aging LLVs are costing the USPS a fortune. The Postal Service spends almost $2 million per day to repair and maintain its LLV fleet. According to PostalTimes.com, “In FY 2019, the Postal Service spent about $706.2 million in maintenance costs for 141,057 LLVs.”

That’s just over $5,000 per year in annual maintenance cost for every mail truck — FIVE times higher than the cost to maintain an average car.

So buying new vehicles for the USPS isn’t a luxury. The mail carriers need new rides.

A recent YouTube post by Regular Car Reviews gives us an intimate look at the LLV. And it ain’t pretty. Check out the video for yourself, but here are a few screenshots from that video of what an LLV looks like from a mailman’s perspective. 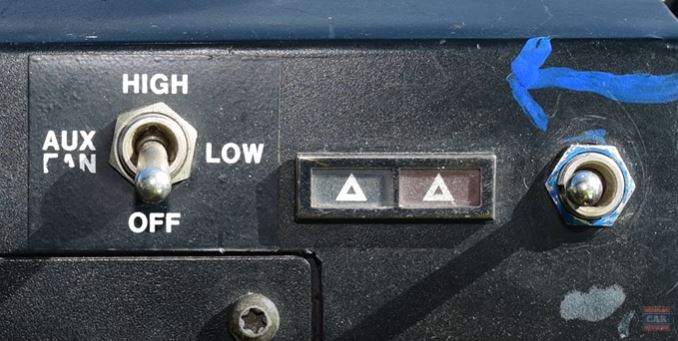 It’s like the cab from a "Mad Max" vehicle. Clunky switches and knobs. There are wires hanging everywhere. It's a mess.

Moreover, these LLVs have been known to be major fire risks for years.

According to documents obtained by Motherboard via a Freedom of Information Act request in 2020, there have been at least 407 LLVs damaged or destroyed in fire since 2014.

That amounts to about one every five days. 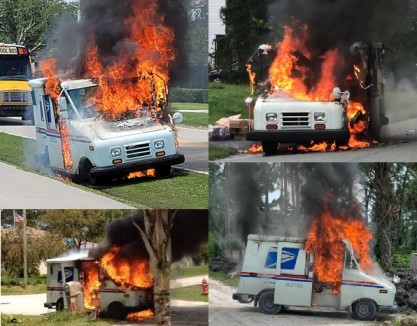 The Grumman LLV is known to run so hot, you can cook steak on the dashboard.

One mail carrier did: 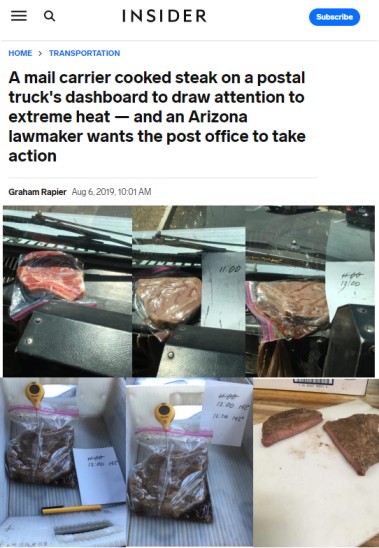 Our mail carriers have been driving around in 25-year-old vehicles, without airbags, that are prone to fires. They’ve needed new vehicles for a while.

And, to their credit, the Postal Service has been working to get them new vehicles for years.

Back in 2015 the USPS began seeking to replace the Grumman LLV. Several automakers were chosen to design prototypes. But it was ultimately awarded last year to Oshkosh Defense, a subsidiary of Oshkosh Corporation (NYSE: OSK).

Valued up to $6 billion, the contract allows for the delivery of between 50,000 and 165,000 NGDVs over a 10-year period. The 50,000 vehicles ordered three weeks ago is the first of what we can assume is a handful of large contract purchases from Oshkosh.

Of course these Next-Generation Delivery Vehicles are not without controversy.

And not just over how these things look.

Of the first 50,000 NGDVs the Postal Service ordered, only about 10,000 were planned to be battery electric vehicles. The remaining 40,000 would have ostensibly been manufactured with gasoline engines.

That's a problem for Democrats.

As a result, the House Oversight and Reform Committee instructed the USPS earlier this month to “go back to the drawing board” to determine how many electric vehicles it can afford. The Committee also wants the Postal Service to draft a new environmental impact study, new cost estimates for EVs, and “immediately renegotiate” for a better price from Oshkosh.

And that’s where it stands now. The USPS and House Oversight Committee will likely continue to go back and forth for a while.

But that's not the only controversy over the NGDVs.

Last year there were suspicions of insider trading that may have occurred leading up to the announcement that Oshkosh would be awarded the contract.

Back in March 2021, House Representative Tim Ryan of Ohio formally called for an SEC investigation into $54 million worth of Oshkosh shares that traded only 20 hours before the Postal Service announced the firm as the contract winner.

That investigation was either never conducted, it was found there was no wrongdoing, or is still underway because there is no news following Representative Ryan's request.

This year, as Congress prepared to debate the National Defense Authorization Act for fiscal year 2022, Rep. Diana Harshbarger, a Republican of Tennessee, purchased thousands — possibly up to tens of thousands — of dollars of stock in the defense contractors Oshkosh Corp. and Raytheon, according to a federal financial disclosure.

They continue to gobble up bigger and bigger pieces of the pie, even as everyone else fights for scraps. But Outsider Club editor Alexander Boulden has figured out how to beat them at their own game.

He and his team have poured thousands of hours into developing a proprietary algorithm that uses four powerful spotlights to learn what insiders are up to behind the scenes.

Imagine knowing that Oshkosh would be awarded the Postal Service's contract before it was announced and buying the stock WITHOUT breaking ANY insider trading laws.

Here's what would have happened to your stock: 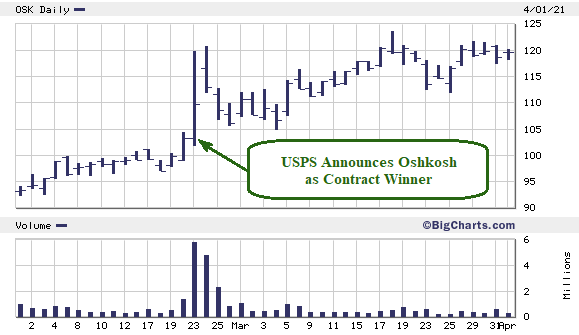 Using his newly developed method, Alexander Boulden pinpoints exactly which stocks are primed to soar next by tracking what insiders are doing with their money.

He has recently put together a new report detailing this strategy which you'll want to check out now. You can get access to this report easily and completely free by clicking here.