The Truth About Inflation and Gold

Here is a little dose of reality for all of those inflation naysayers out there:

Together, these three depressing facts mean a vast majority of Americans have seen their wealth and income crushed by inflation.

Your wealth needs to have grown 220% over the last 30 years to have outpaced inflation.

Unless you have owned your home for 30 years or heavily invest a large portion of income in the stock market, there is little chance you have experienced anything close.

If you bought a home in 1987, on average the appreciation falls just short of keeping up with inflation.

Right off the bat, we know a third didn't do that. And the real number is much higher.

Considering a 30-year mortgage is the longest you'll find, only 35% of U.S. homeowners don't have mortgage debt, and home value is the dominant form of wealth for a vast majority of homeowners, we can infer that a majority of Americans have seen their total wealth trail well behind inflation.

The average head of a household in the U.S.A. only has $12,000 stashed away for retirement.

That leaves income as the major source of wealth creation for a vast majority of Americans.

With all this in mind, check out this graph to see why life has been so depressing for Americans over the last 30 years:

There has been a 29.4% real wage increase and a 213.3% increase for all items in the consumer price index.

Effectively, anyone dependent on wages has seen his or her purchasing power drop by half.

According to official U.S. government data, annual inflation has grown at an average of about 4% over the last 30 years.

Of course, that's after the government implemented all sorts of shenanigans to make inflation seem artificially low. The official line used each time is that the change makes inflation data more accurate. Yet each and every time, and there have been dozens of times, inflation is tweaked down. How convenient.

If we still determined inflation using the calculations from 1980, it'd be significantly higher: 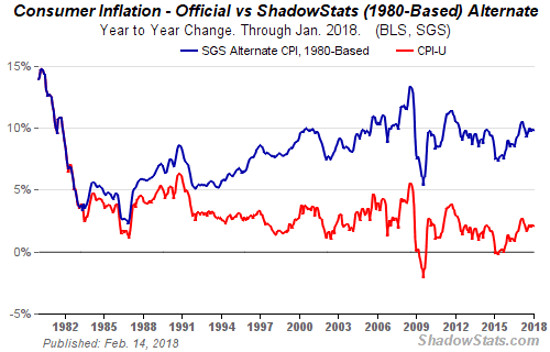 The simple fact of the matter is inflation has been the predominant reason a majority of Americans are being pushed towards poverty and deeper into debt while creating a massive headwind for wealth creation for the rest.

The low inflation we've seen in recent years is an aberration. There will be a return to the norm. Anyone taking the government and Federal Reserve's dismissals of inflation concerns at face value is ignorant to reality.

The Best Way Out

I wish I had a way out for the half of Americans who don't have any exposure to the markets or the 76% who live paycheck-to-paycheck. If I, or anyone else did, they'd be a shoo-in for a Nobel Prize.

For those of us with money to invest, there is a tried-and-true way to offset some of the effects of inflation on our portfolios.

Get into gold and gold miners.

Go back to when President Nixon abandoned conversion between the U.S. dollar and gold reserves in 1971, and gold is up around 3,500%. The S&P 500 certainly can't match that performance.

The simple fact is that gold has and will continue to be the best way to protect and preserve wealth over long periods of time. The numbers don't lie.

And right now, we're looking at a great time to get into gold miners in particular. We're coming off a cycle of wealth destruction in the sector that started with the steep gold price drop in 2013.

Over the past five years, debt has been unwound, management teams have been tossed, and we're seeing a lot of leaner, very efficient operations being developed right now.

We're now looking at a gold sector with strong demand for mergers and acquisitions to replace falling reserves and continue driving down all-in sustaining costs.

Of course, not all companies are poised to thrive in the post-correction years of gold. Due diligence is an absolute necessity.

That is an area the Outsider Club's founder, Nick Hodge, has years of expertise in.

He recently got back from a site visit to a gold exploration property that is going to become America's biggest gold mine. Investors who hold shares before one of the major gold miners snap it up will collect a windfall.