The Threat From the “Holier Than Thou” Fed’s Massive Losses

It has been 14 years since the first round of quantitative easing by the Federal Reserve started.

An amount of time that, in bond and stock markets, might as well be several lifetimes.

In that time, the Fed has doubled down on this balance sheet trick again and again.

It has dramatically broadened the scope and time frame involved. It has used its privileged status as a bank, but not a normal bank, to its advantage all along, but never before have we seen anything like this.

The Fed is now showing a $330 billion loss on the assets it holds according to its first quarter statement.

What does that even mean? A lot, or nothing depending on if you buy into what the Fed itself says.

We should start with a look at the assets the Fed holds, I reckon. Here’s a peek at the balance sheet. 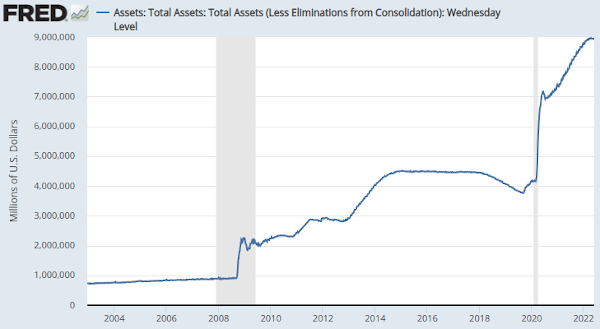 For virtually all of the QE era, that only generated income that should be passed on to the Treasury, though there were times when the numbers flipped negative. But there was nothing like what we’re seeing now.

$330 billion in operating losses, as they’re referred to, is on par with half the yearly allocation for the military, or about 25% of the yearly U.S. federal government budget.

So what does this ungodly number mean? According to the rules the Fed makes for itself, and how it explains it, nothing at all.

Of course, this idea that it doesn’t matter is absurd. Yet this is how the Fed wrote the rules for itself.

The Fed changed the rules that apply to itself in 2011 so that it no longer needs to report a reduction in capital.

In essence, it decided it can no longer go bankrupt. Must be nice. Instead, those losses become “deferred assets.”

In a roundabout way its operating losses are simply tagged onto the balance sheet until the remittances it sends to the U.S. Treasury from future earnings from its assets make up for the difference.

In other words, it practically functions as if it added yet another type of debt to its balance sheet on top of the nearly $9 trillion it already “owes” the U.S. government, and thus U.S. taxpayers.

If this seems like an extra layer of shenanigans tagged on top of what masquerades as a legitimate double-ledger balance sheet, well, you’re right. The Fed knows it too, it just doesn’t care.

If this seems unethical or duplicitous to you, don't think the Fed holds itself to the same standards there either. Again, it doesn’t play by the same rules because it sets its own rules.

Let’s get back to this concept of “deferred liability” though. What happens when interest rates remain persistently high?

What happens when this “holier than thou” central bank status is undermined by constantly eroding faith in the durability of the U.S. dollar and faith that the government will always pay its debts, eternally remaining the best lender of last resort?

That’s a question no one who sets the rules cares to entertain. They see no need. It hasn’t even been a question for generations.

Yet de facto bankruptcies of the government and the Fed have happened before and we’d be fools to think that it can’t happen again. This kind of black swan event would be globally catastrophic.

It reminds me of the recent flash crash in the crypto sector involving Terra UST, which was designed with a counterparty crypto coin, Luna. The whole system was designed for Luna coins to soak up any volatility in Terra UST, potentially return greater gains, and keep Terra UST stable.

It worked wonderfully right up until it didn’t, as people lost faith in both. The crash happened within days.

I’m certainly not saying this is imminent but the system is built on the same assumption. We're assured nothing can or will go wrong because the people in charge of it can’t imagine why people would lose faith in the system they built and control.

This is the fundamental flaw at the heart of the ever-increasing Fed balance sheet, ever-expanding U.S. debt, and ever-degrading potential for those that trust the combination of the U.S. government and Fed to act in good faith with their wealth.

It works until it doesn’t. Look back at that chart up top. Picture increasing “operating losses” compounding that $9 trillion in debt and how there has been no substantial effort to reduce it.

Let’s hope this round of quantitative tightening actually makes a dent. Let’s hope the Fed actually sticks to its plan and proves it is willing to make a meaningful reduction in its holdings. That it will turn off the endless monetary printing press that is now creating ever-increasing liabilities for itself through an inflationary feedback loop.

Otherwise, if we endlessly move in the same direction, only one outcome — as improbable as it is now — is ultimately possible.