The Thing About Silver...

Before we get into this, I’ve got to say that I like some aspects of silver as an investment, but it tarnishes in the real world (sorry).

I'm probably going to take some heat on this, and everyone feel free to email in and let me know what you think, but I think there are better metal investments (especially miners) to invest in right now.

Unlike gold, where most of it goes into jewelry and investment products, silver is used to a much greater extent in applications where its unique properties are hard to replace. I just wish far more was used by industry (more on that later).

In recent years there have been supply deficits. In 2017, demand was up for jewelry, silverware, electrical components, and industrial fabrication. Silver demand used in photovoltaics rose by 19%.

Demand still looks good on the industrial side of the equation, but it looks like jewelry and investment demand are sagging and there will be a small surplus in the 2018 numbers due to weakening demand overall, about 1.8% according to analyst consensus.

Here are some charts from the 2018 World Silver Survey from The Silver Institute that show the trend through 2017:

You can see the deficit shrinking for years now as demand on the investment side has never recovered from 2011's price spike.

There are trends I like in the data. Silver used in photography is down to about 40 million ounces, while demand for electronic and electrical applications is expected to expand 2.8% in 2018 to about 250 million ounces. What once was a primary use has faded to a footnote.

That is not enough to make up for the other side of the equation though. Silver simply isn't attracting investor attention and capital, even compared to other commodities that have been largely neglected. Here is a five-year comparison of gold and silver as represented by their popular ETFs — GLD and SLV:

Here is a three-month chart as well, where silver has outperformed gold, which gets back to why silver is drawing renewed attention:

I'd draw your attention back to that five-year chart though.

When gold prices spike up, silver prices spike more. You can clearly see that as the gap contracts in early 2015 and July 2016, and it's there but less visible in a lot of other spots. After the spike subsides, SLV once again starts slowly falling behind more and more.

When there are signs of life, some money floods in and bids up the price. The money is pulled out.

About 60% of silver is used in industrial applications while 40% goes towards jewelry and investment.

Silver is a hard to replace metal for many of its uses, but there isn't enough used to create an obvious or stable price floor based on industrial usage.

Only about 30% of production comes from primary silver mines. The other 70% is byproduct from base metal production.

As long as there are base metal mines, especially copper, lead, and zinc, silver will be dumped into the market at just about any price.

Scrapping operations decline with price and the amount of silver re-injected into markets will ramp up with higher prices as well.

There simply isn't enough sustained investor demand on the buy side to overcome massive short positions and keep prices from steadily drifting lower between these small rallies.

I've got one more chart for you: 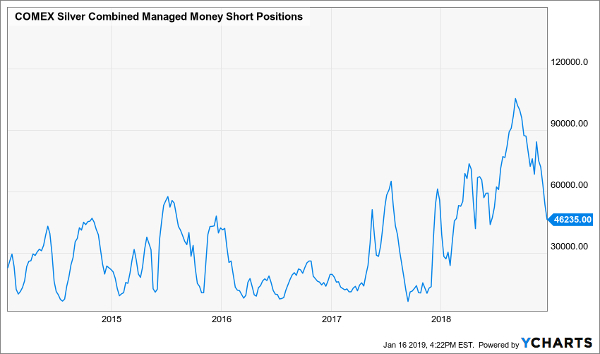 Check out that high in August. This is what you're fighting against when investing in silver these days.

A contrarian play could be very profitable at today's prices, but a buy-and-hold strategy will need to be open-ended.

Using silver as a short-term momentum play could lead to better returns than gold in a rally, but you won't have the same price support on the downside. And you'll have these big investors shorting against you and slamming the price back down before long.

To wrap it all up, silver is just in a weird position.

If you want to invest in commodities with industrial use, some other metals have seen big rallies and don't have to depend on speculation to support nearly half of demand.

Gerardo is about to release a new report to his Junior Mining Trader readers about a play that should deliver strong returns in a pretty short time frame. Stay tuned for that.

If you want to invest in precious metals, gold is still the biggest and most popular by far. You won't see other miners dumping it into the market at any price or short positions crushing prices.

The "original goldbug", James Dines, just issued a new call to invest in gold, and with his track record and experience, it is definitely worth checking out.

In short, I don't expect silver to outperform or even keep up with gold for long. But, if you want long-term exposure to a critical metal, it's hard to find anything cheaper today.

A lot has to change though for it to pay off, and you'll have to be willing and able to play an ultra-long game here.