The Theft of the Century?

A patent conspiracy that could line your pockets...

It’s a well-known fact that Alexander Graham Bell invented the telephone. We’re taught it in elementary school. The Bell Telephone Company became one of the most successful businesses in American history. There is even a crater on the Moon named after the guy!

It all started in 1876 with Bell’s patent for the telephone — U.S. Patent No. 174,465 — widely considered to be the single-most important patent in history.

But what if it was all based on a lie?

This picture could hold the secret to one of the biggest thefts of the last century... 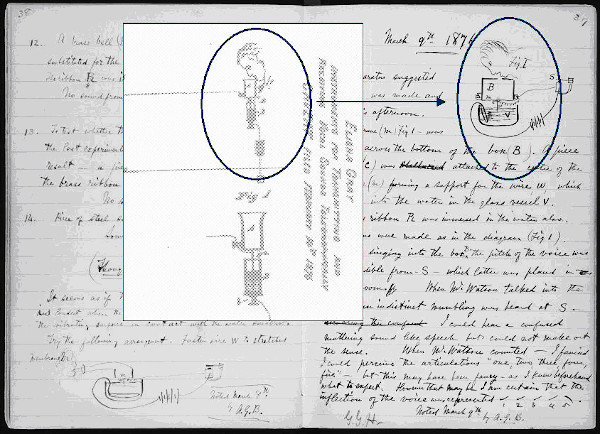 What they didn’t teach us in school was that there was a rush to the patent office on that fateful Valentine’s Day of 1876. A fellow inventor named Elisha Gray submitted his very similar “talking telegraph” idea to the U.S. Patent Office a mere few hours after Bell.

At the time Gray was an established professional inventor and founder of the Western Electric Manufacturing Company. Bell, however, worked as a private speech teacher for the deaf with a side gig as an inventor.

Both patents were based on the idea of a liquid telephone transmitter — essentially an early microphone. That’s where the picture above comes in...

The larger drawing was part of the caveat document that Gray turned in that day. The other drawing was found in Bell’s journal, dated March 9 — almost a month later. It doesn’t take Sherlock Holmes to notice the incredible similarity between them.

Not long after his journal entry, Bell built the liquid transmitter and made the famous first call to his assistant: “Mr. Watson, come here, I want to see you.”

The rest is history.

There are heated arguments on each side of the Bell vs. Gray debate. There is anecdotal evidence from a patent officer named Zenas Wilbur that Bell slipped him $100 for a look at Gray’s document that day. There is also evidence that Wilbur was a penniless drunk who was bribed by a rival telephone company for their own purposes.

Bell also successfully defended his various patents over 600 times, going all the way to the supreme court.

We may never know the whole truth. But it hardly matters to Alexander Graham Bell whose place on the Mount Rushmore of American geniuses has been etched in stone.

As they say, history is written by the winners, and to the victor goes the spoils. Speaking of, history is now repeating itself right now with a brand new series of patent wars — and you could be the winner...

We’ve already seen how litigious patents have been in the cellphone age. There have been countless court cases in the “smartphone patent wars” that have involved every global smartphone you can think of.

The most notable was Apple vs. Samsung...

The two industry heavyweights began sparring way back in 2011 when Apple accused Samsung of infringing on its patents. The lawsuit noted similarities in the user interface and style — seemingly minor details like the curved shape of the phone to the two-finger “pinch-to-zoom” gestures. In 2018, Samsung eventually settled with Apple for an undisclosed sum (thought to be around a half-billion dollars), but Samsung was still able to market its products. In the meantime both companies had to drop hundreds of millions on attorney fees.

As you can see, the sheer amount of lawsuits and cash flying around is mind-boggling. Patent litigation is itself a multi-billion dollar industry, and according to patent risk company RPX there are over 250,000 smartphone-related patents. And that was in 2012!

A research paper in the NYU Annual Survey of American Law noted that it would take 2,000,000 patent attorneys working around the clock to compare competing companies’ products with the patents owned in the market. It all sounds completely exhausting.

That's one reason that I’m not interested in choosing sides in another telephone war. I’m more interested in the picks and shovels of the booming 5G industry that don’t have anywhere near the amount of court battles or media attention.

Specifically I’m interested in the microprocessors that power the phones...

Without these chips, Apple and Samsung would be sitting on millions of tons of worthless metal.

I’ve found a company that already holds more than 4,200 patents, and it’s the U.S. government’s top pick for the processing chips, antenna receivers, and signal boosters used in new 5G systems. More importantly, it holds a patent for a unique design that could outprocess current computer chips tenfold.

This company’s technology could do to today’s chips what Alexander Graham Bell did to the telegraph.