The Scarcity of Gold

Pop quiz, hot shot: here are three simple questions that every human should be able to answer honestly.

Your investment future may even depend on it.

If so, did you measure commodities prices for corn before your weekend Bar-B-Que?

If so, did you check the cotton futures before you buttoned it up?

If so, did you research the worldwide oil production before you filled your tank this week?

These are all trick questions because — of course you didn’t.

And why would you?

That would be completely absurd, and would ruin every purchase you’d ever make in your life.

You'd spend far too much time thinking about the providence of your expenditures when you could be out buying groceries, speeding home, changing into a dapper outfit, and impressing your dinner date with a delectable meal.

At least that was my thought process…

But one thing to keep in mind about all of your daily purchases — and more importantly for your investing purposes, is scarcity.

Scarcity: the gap between limited resources and theoretically limitless wants.

It’s a pretty simple concept, right? Oil, cotton and corn prices fluctuate based on how readily available it is.

If something is hard to get, it’s worth more. That’s simple economics. That’s why something like an ounce of gold is worth far more than an ounce of kitty litter.

But is it that simple?

Do we actually know how scarce something is?

Based on my experience in a very niche market, I would argue that scarcity is often very, very manipulated…

I recently watched Jack of All Trades on Netflix. It’s a documentary that focuses on the baseball card scandal that made me want to scream and cry at the same time.

It’s about a grown man who goes back to his mother’s house to unearth his “hidden treasures” of baseball cards from the late 80s and early 90s. He figured that he would fund his retirement from his childhood riches.

Boy was he wrong…

He walked into a card convention with a box full of his best stuff, and the dealers laughed at him. These were full sets of 1987 Topps, 1989 Upper Deck — the cream of the crop. The man — Stuart Stone — thought he would score thousands off of a small portion of his collection.

The dealer offered him about $14 for the whole box. He explained to him that during the golden age of baseball cards, companies made certain cards seem scarce to drive up their value. In reality the cards were “hard toilet paper.”

For example, the coveted Upper Deck Ken Griffey Jr. rookie card was the crown jewel of 90s baseball cards. That was because it was claimed to be almost impossible to get from a pack. 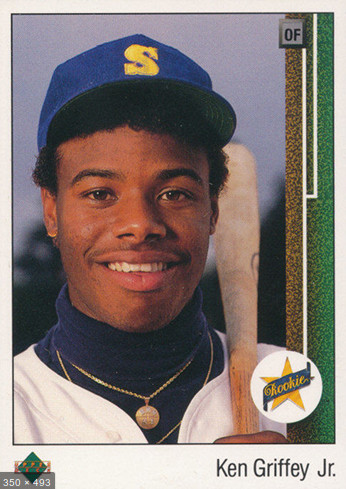 I was one of those kids who spent far too much of my allowance trying to find that baseball diamond in the rough.

At one point I went into a card shop and they were selling the card for $300. I asked the dealer how long it would be for sale and he told me “Someone will buy it before you even leave the store.”

Sure enough, a kid behind me plunked down $300 in crumpled up bills and walked out with a massive smile on his face. I was jealous until I saw the owner go to the back room and come out with yet another one.

“You can buy this one," he grinned.

I passed, and I’m glad I did. These days the card sells for $50 if you’re lucky.

That’s because Upper Deck was printing thousands of sheets of them, flooding the market while maintaining that illusion of scarcity.

There’s a reason I brought up baseball cards in terms of scarcity. There’s one commodity right now that is actually and veritably scarce.

In fact, all of this metal mined throughout history could be packed into a cube that fits inside the infield of Camden Yards — the famed baseball stadium that sits blocks from my office.

Of course, I’m talking about gold.

The World Gold Council estimates that 187,200 tons of gold have been mined to this day. While that sounds like a lot, if you molded it into that baseball infield-sized cube, it would only measure about 21 meters per side.

But gold is a lot harder to mine these days.

The U.S. Geological Survey believes that there are only around 57,000 tons left. And that’s it — miners will no longer be able to scrape gold out of the Earth.

That’s why gold is such an important investment — it is very, very scarce.

The problem is that most miners are having serious trouble locating decent places to mine. Many small miners run out of capital before they ever score on a big dig. But when they do, they literally hit the gold mine.

You need to be able to differentiate mining companies.

As Mark Twain once quipped, “A gold mine is a hole in the ground with a liar standing on top of it.”

Sadly, this is true on most occasions. It’s just like the crooked baseball card companies that led children to the card shops in search of that one “rare” card that they could retire on one day. They know that it’s all a big racket to take money from your pocket and put it into theirs.

That’s why if you are really going to make a fortune on gold, you need to listen to mining experts who actually visit the mines, do their research, and have actually had success doing it.

This is why I get all of my gold research from Nick Hodge and Gerardo Del Real. They’ve visited gold mines from the Yukon to Chile to Mexico. They’ve toured the facilities, grilled the geologists and CEOs, and come back with a list of the single-best gold plays I’ve ever seen.

Not only that, they’ve teamed up with a gold investor who is worth an estimated $800 million. He’s one of the most prominent mining investors in South America, with connections across the globe, including to the Rothchilds.

The three of them sat down to really dig into the gold market and unearth one company that is first in line to recover what’s left of the gold supply.

If you’re serious about investing in what Nick is calling “the last gold bull market,” I urge you to take a moment and watch their conversation. You'll learn more about gold investing from them in a few minutes than you've probably ever learned in a lifetime.

You may even get to take home some free gold of your own — which I assure you, will be a far better investment than my baseball cards.