How does Elon Musk really feel about cryptocurrency?

I wouldn't blame you if you're confused. The Tesla founder's recent erratic behavior has sent the entire crypto market up and down faster than an exploding SpaceX rocket. And it doesn't look like he's done with his wild shenanigans.

First, the mere announcement that he was going to host Saturday Night Live sent his pet crypto Dogecoin soaring to record highs. Rabid investors rushed into Dogecoin in anticipation of Musk's appearance, understandably assuming that he'd plug the coin to a brand new audience and send prices soaring “to the moon.”

You could be forgiven for buying into that theory — if he had put on a smile and sang its praises as a revolution in decentralized currency. But you know what they say about those who assume: “it makes an ass out of u and me.”

This is the charmingly unpredictable Technoking we’re talking about! You have to expect the unexpected. Instead of drumming up excitement, he got in front of the cameras and did the exact opposite. In one uninspired sketch he actually referred to the Doge as a “hustle.” As usual, the market again took him at face value and the price plunged over 40% in the days following, wiping out some $20 billion in wealth.

I'd say his comic delivery — like his impulse control — needs a little work.

But Musk wasn’t done toying with the crypto market...

Mere days afterward he sent out yet another coin-jangling tweet: 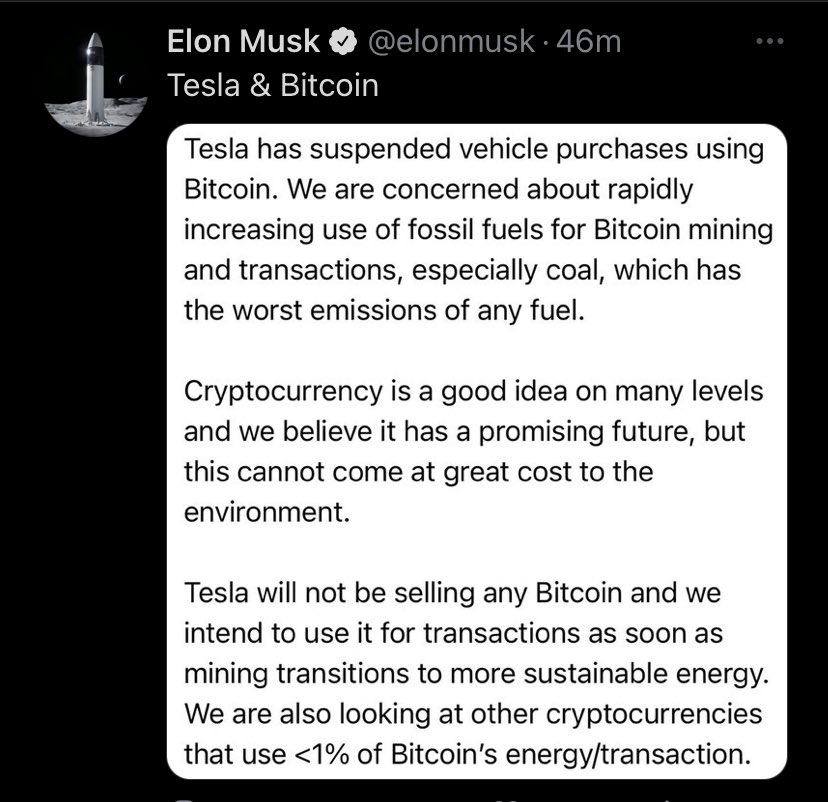 You read that right: Tesla is no longer accepting Bitcoin as payment for its coveted electric cars. Not because it’s a wildly fluctuating investment vehicle, but because of environmental impacts.

It has been known to even the most passive observer that Bitcoin mining was bad for the environment. That mining requires a tremendous amount of energy is not news; it’s been known for years. Research from the University of Cambridge Centre for Alternative Finance found that Bitcoin mining accounts for about 0.69% of global electricity consumption. To put that in perspective, that’s more than the entire country of Sweden. 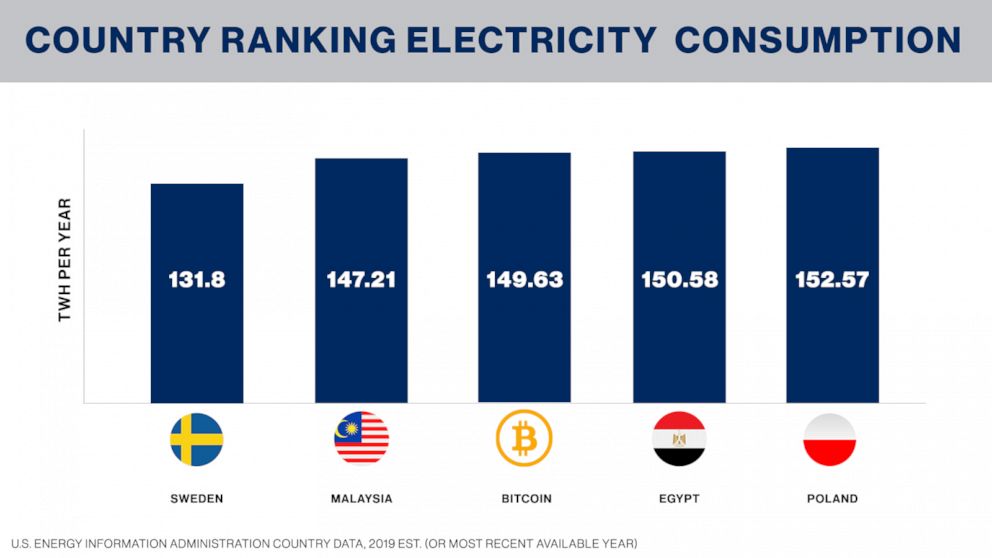 A man of Musk’s intellect, power, and interest most certainly knew this already. In fact, Tesla’s mission statement reads that “the faster the world stops relying on fossil fuels and moves towards a zero-emission future, the better.”

So, assuming that Musk knew all along that the perils of Bitcoin mining on the environment ran counter to his goal of a zero-emission future with Tesla, why did he just now decide to stop Bitcoin payments?

It has nothing to do with the environment, the currency’s volatility, or his personal interest in rival Dogecoin.

You see, while coin mining does require a load of energy, it also requires specialized computer chips with the ability and processing power to unlock the coins themselves. And miners are snapping up all of the available chips in order to keep their rigs running and creating more and more cryptocurrencies.

This has contributed to a massive dearth of available microchips and sent prices skyrocketing.

And guess what else requires microprocessors? Cars — specifically electric vehicles like Tesla. Musk’s company has already had to raise prices on the Tesla Model 3 — the bestselling plug-in car in the world — by $3,000 so far this year due to the shortage.

So Elon is essentially having to make a business — not an environmental — decision. Does he want the scarce semiconductors going toward Tesla’s Bitcoin investments or the actual product that he got famous for creating?

I think it finally dawned on Elon that his adopted stepson was stealing his firstborn’s lunch money...

The chip shortage has broad effects beyond Tesla and Bitcoin. It has caused major automakers like Ford, Volkswagen, and Toyota to halt production. The entire 5G industry has been throttled, causing delays in everything from cellphone network rollouts to internet of things consumer products like thermostats and refrigerators. Microsoft and Sony are patiently awaiting chip deliveries in order to roll out their Xbox and PlayStation 5 consoles.

Even the mighty Apple has faced shortages for its iPhones and Macs.

It doesn’t appear to be letting up anytime soon: Some industry estimates have forecasted shortfalls lasting until 2023.

This chip shortage is so disruptive that Congress has gotten involved and is voting to unfurl $52 billion to jumpstart our domestic semiconductor production and research and development. The goal is to keep U.S. companies from being beholden to Chinese chipmakers, who have been hoarding chips and marking up prices during the shortage.

I’ve been following a domestic company that should benefit heavily from these government dollars — especially on the research and development side. This Massachusetts-based chipmaker has teamed up with the Department of Defense and the Massachusetts Institute of Technology to develop a new semiconductor that pushes the boundaries of chip design.

They’ve already discovered a way to make microprocessors 10 times more energy efficient, and they’ve never been in a better position to bring what I’m calling their “God Chip” to market.

While the public is fretting about higher Tesla prices, seesawing Bitcoin prices, and 5G bottlenecks, you could be quietly watching the dawn of a new computer age — and the inevitable profits that will follow.

I’d urge you to have a look at their technology for yourself, before Elon Musk starts Tweeting about it.