The Only Way The Fed Could Rationalize This

There is no doubt in my mind that the Fed has been molded into a tool.

Not by or for politicians, or banks, but Wall Street. It naively took it upon itself to take on a new job unrelated to monetary policy, ventured into the business of manipulating stock values, was captured, and was monetized.

Yesterday was a prime example. All of the headline numbers are actually pretty strong. The case was clearly made from the monetary policy side for a modest hike.

Some data points for the Fed's dual mandate have oscillated around, but inflation is certainly under control, the official unemployment rate is as good as it realistically gets, wage growth is picking up, and applications per vacancies is way down.

However, on the market side, we can find a number of reasons that the Fed could rationalize putting off a raising the Fed Funds Rate for its new Wall St. overlords.

What is really standing out in financial news is something that is not being accounted for in share prices.

We're currently in the middle of the longest earnings recession since 2008.

According to FactSet, the second quarter was the fifth straight in which overall earnings fell. What's more, estimates show they will dip further in the third quarter before finally posting a gain in the last quarter.

Of course, the quarter in which gains finally reappear has been pushed back several times already, so take that with a grain of salt.

Those fourth quarter earnings estimates have already been cut in half, and previous quarters show how estimates have consistently been way off the mark: 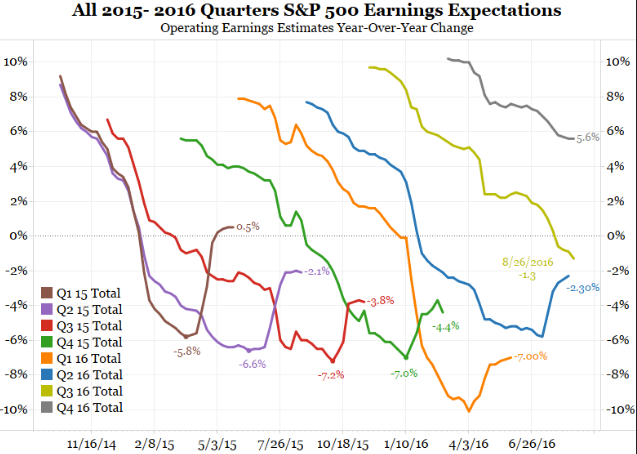 “Since 1947, every time profits fell this much, or for this long, a recession was either underway or about to begin. The only exception was the middle of 1986 to early 1987.

“The argument can be made that corporate profits fell in 1986/1987 because a collapse in crude oil prices crushed energy profits. This is similar to the current fall in profits...

“Despite this collapse in profits in 1986/1987, stock prices marched to new all-time highs. The same is happening now. However, by the fall of 1987 the market became overvalued by most measures and crashed, reversing all the gains over the previous 18 months.”

Much has changed since 1987, but a simple fact remains. If the earnings aren't there, valuation has to change through price discovery.

The Fed, in this regard, is undermining a fundamental aspect of the stock market.

Yes, the Fed has a mandate to maximize employment, but that was implicitly meant to be through the Fed's sole domain — monetary policy. This is unadulterated market manipulation designed to maximize stock prices.

The virtually free money it is continuing to pump into expanding corporate debt balances is being extracted through dividends and buybacks, not capital expenditures that increase growth potential.

The most basic definition of debt is that it is a means to take future capital and spend it now. This constricts future cash flow when the capacity to grow is underfunded, and reduces future cash flow.

The Fed can't paper over national and global supply and demand. This tactic will fail, and it will only make the future hit to employment and the economy worse than it would be if the markets were allowed to gradually process lower earnings over time.

Tie all this together and you can easily see that the Fed is undermining one of its core mandates in favor of its self-appointed role in propping up markets.

Employment will suffer a greater blow from a large stock market shock than it would through a gradual slow burn. Uncertainty and overreaction will be worse, and job cuts will be swifter and deeper.

Short-term tantrums, like the one we saw in recent days, let Wall Street keep the Fed in line. And the Fed rationalizes its compliance by looking at the structural weaknesses its own policies have created.

We're already seeing volatility back down to historically low levels this morning, and the indices rapidly moving back to all-time highs.

The talk of the town is that the Fed is still sticking to another rate hike this year. I'm far from convinced, but if it happens, it will happen in December.

The November FOMC meeting is a couple days before the election, and virtually everyone expects the Fed to steer clear, if only for appearances. That doesn't rule out some rumblings and volatility, but don't expect much.

The big show will be in December, after the sixth straight quarter of shrinking earnings. The lead up to the FOMC meeting will be similar to, if not worse than, the September meeting yesterday.

Before then, consider what I talked about over the weekend. Volatility tends to shake loose correlated assets and sectors.

Consider diverting new trading funds towards investments that don't sink or rise in step with the broader market.

Whether you care much for gold or see it as just another rock, three facts remain:

In short, gold miners already went through a period of rough times that the broader market is looking forward to, possibly as early as two months from now.

That makes gold investments some of best available for upside potential amongst assets and equities that see correlation drop as volatility increases.