The ONE Reason Why Gold Is Flat

What is the deal with gold?

That’s not a set-up to a Seinfeld joke.

Inflation is soaring, the equity markets are in a bear market, a recession is looming, geopolitical instability remains elevated, and there are multiple currency wars waging.

Markets are fearful, to say the least.

The CNN Fear and Greed Index has been sitting in “extreme fear” territory for more than a month. 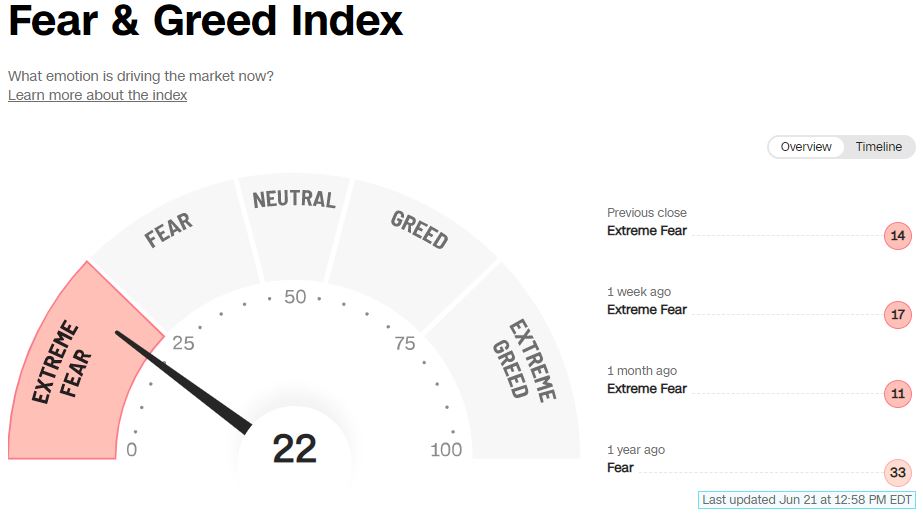 According to the World Gold Council, gold demand saw an annual 34% increase during the first quarter of the year. The WGC said 1Q 2022 demand was “the highest since 4Q 2018 and 19% above the five-year average.”

So since there’s extreme market fear and strong demand, gold prices must be soaring, right?

Despite everything the market has been dealing with over the past 12 months, the price of gold has increased by a measly 2.6%.

Gold hasn’t even kept up with inflation. WTF?

With everything going on in the market (inflation, equity decline, recession, etc.) investors are moving into gold as a hedge. As noted by the World Gold Council, gold ETFs saw their strongest quarterly inflow in the first quarter of 2022 since 3Q 2020.

But more investors are moving into cash as a hedge — specifically the U.S. dollar.

Last month Bank of America reported the number of clients moving into cash was at the highest level since 9/11, citing fears of hawkish central banks and the possibility of a recession. And the continued pull back in U.S. equities since then indicates the appetite for cash remains high.

put high demand on the greenback over the past several months. Values for major world currencies like the euro, Swiss franc, Japanese yen, and others have plummeted over recent months as a result of their loose monetary policies from their respective central banks and other geopolitical factors.

As measured by the U.S. Dollar Index, a basket of six major world currencies including those three mentioned, the dollar is nearly at a 20-year high.

Simply put, demand for gold is strong, but the demand for the USD is stronger. As a result, its value in the forex market is soaring. And it’s the USD’s forex value that’s holding down gold prices.

Even though gold and the U.S. dollar have officially been decoupled for more than 50 years now, the greenback and the yellow metal tend to trade inversely. Although it’s not extremely uncommon for both to trade in the same direction any more, most of the time when the dollar rises, gold falls — and vice versa.

So with the USD Index rallying so much over the past 12 months, we may have actually expected to see gold prices fall.

But the yellow metal has mostly remained flat.

I think there’s a lesson to be learned from all of this. And that’s the present gold market is way more uncertain than most investors would expect.

The old “rules of thumb” are no longer the rules. High inflation data, market sell offs, recession, geopolitical instability… even strong physical demand… none of these are guarantees of higher gold prices.

The only guarantee in the gold market right now seems to be uncertainty.

I still believe we will see a significant rally in gold prices at the end of summer. How it all turns out, however, is yet to be seen.