I spent the bulk of the last month in two countries that have been ravaged by drugs and violence for decades.

Both have borne witness to gang wars that have killed more people than the populations of some large U.S. cities. They've witnessed crimes so brutal that you wouldn't believe it if you read them in a horror novel. The citizens have lived through government corruption that makes the United States look like a bureaucratic utopia.

These countries have also been the wealthiest recipients of the United States' fierce appetite for illicit drugs. Cartels have reaped billions of dollars in ill-gotten gains.

I'm talking about Colombia and Mexico...

I've traveled to both in the last few weeks and have some observations that could help you as an investor.

The physical beauty and rich culture of these Latin paradises has regularly taken a back seat to the glorified depictions of well-dressed drug lords with mountains of cash, scores of beautiful women, and gold-plated mansions.

But anyone who has seen Scarface can attest, what the illegal drug trade giveth, it also taketh away.

They say that there are two ways to leave the drug trade: handcuffs or a body bag. Personally, I like making "drug money", but I'd rather avoid both those fates.

That's why I'm more than happy to contribute my investment dollars to mutually profit from both countries' legal drug trade.

Colombia and Mexico have both recently decriminalized and legalized medical marijuana, and they will soon partner to open up one of the most lucrative joint ventures this side of the cartels...

It is a country that is most infamous around the world as the breadbasket of cocaine.

At one point, Pablo Escobar was exporting 15 kilos of cocaine per day. That adds up to $70 million! It made him one of the richest men in the world. By the 1990s, he was worth around $30 billion and even made the Forbes International Billionaires list for a whopping seven years in a row.

On a recent trip to his birthplace of Medellín, I took a boat ride to his favorite exotic hideaway. La Manuela — charmingly named after his daughter — was Escobar's second-favorite home. It is located on the waters of the Peñol Reservoir in the breathtaking, mountainous town of Guatapé.

His villa was surrounded by multimillion-dollar homes that could have come straight out of a 1980s “Lifestyles of the Rich and Famous” episode. The waterfront mansions were perfectly landscaped with palm trees, and most had several boats docked outside. One particularly lavish estate even sported a water slide that snaked a half-mile down the mountain into a massive swimming pool.

But we recognized Don Pablo's hacienda right away...

What once was a sprawling 20 acres of palaces, soccer fields, and helicopter pads was now a bombed-out wreck. It was later found to have been built with double walls that he stuffed with cash and coke.

It even had a guard tower right on the shore. You can see it from this photo I took right outside: 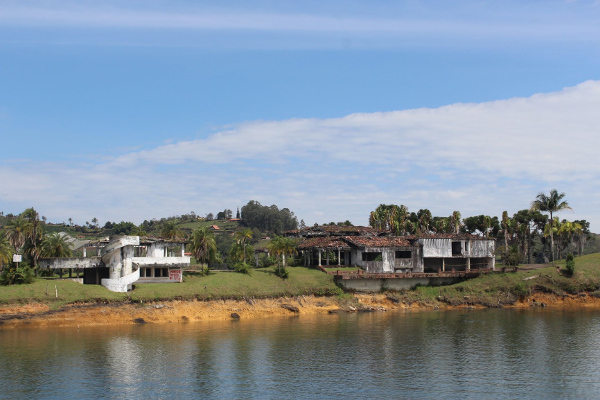 In 1993, a vigilante group funded by a rival cartel blew it to smithereens with 200 kilograms of TNT.

Anyway, I wasn't in Colombia to sightsee. I traveled to the cocaine capital of the world to investigate its second-most lucrative cash crop. I visited a new company operating in the hills of Medellín for my Marijuana Manifesto readers.

It is home to the largest outdoor marijuana farm in the world. But like most companies I recommend, I had to see it for myself.

And what I saw was nothing short of remarkable...

There were acres of cannabis greenhouses as far as the eye could see. 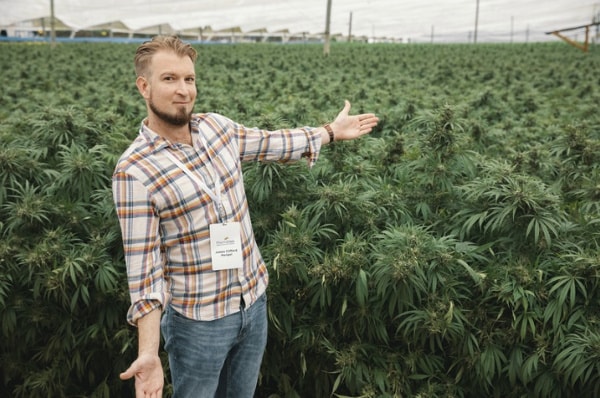 But unlike the bloodthirsty Colombian cartels of yesteryear, it isn't growing marijuana for recreational smokers. The cannabis it produces will be used for medical purposes and then exported around the world.

It is the first company to obtain Colombian licenses for cannabis with unrestricted percentages of tetrahydrocannabinol (THC) and cannabidiol (CBD), which could make it the world’s largest licensed producer.

What's more important is it operates in a location that is the perfect place for outdoor cannabis cultivation. The climate is such that you can grow plants outdoors all year long.

That is one reason Colombia is the world's biggest exporter of fresh-cut flowers. It may soon become the largest exporter of cannabis. The climate allows for the low-cost production and this company's goal is to produce its quality, medical-grade marijuana for an astounding $0.05 per gram.

To put that in perspective, Aurora Cannabis (NYSE: ACB) — one of the largest Canadian producers — is running at around $1.93 a gram. Most companies have aggressive goals to get that price to around a dollar a gram. But that gets nowhere near what Colombian producers are capable of.

Low prices like that make it a game-changer for the global cannabis trade.

To bring it all together, it is currently working on exports to its friends in Mexico. This could be the biggest joint venture since Colombian and Mexican cartels began “cooperativas” to share in lucrative drug profits without the bloody turf wars.

But this new cartel will be using drugs to heal — rather than kill — yet it will still be making millions in the process, without risk of death, destruction, or incarceration.

The future of the global marijuana trade is in the cannabidiol (CBD) produced in places like Colombia.

You can learn more about how powerful and profitable CBD can be — in Latin America and beyond — in my latest presentation.

The Heart of Cannabis Profits
One tiny biotech company believes that a breakthrough in medical cannabis could be the answer that people suffering from heart disease have been praying for. Outsider Club editor Jimmy Mengel discusses the details of the company's big breakthrough...
Why It's Still Very Early Days for the Cannabis Sector
Is it too late to invest? My friend and prominent investor suggested to me the other day that if the elderly are now hip to weed… it’s too late to make any profits. your mom joining Facebook. Could they be right?
The Original Pot Bug's Secret Weapon
Mr. James Dines is a legend whose insight has been proven time and time again. One of those insights was a very early bullish call on investing in marijuana, making Mr. Dines "The Original Pot Bug." Today we bring you an excerpt of The Dines Letter discussing it.
Heal Your Ailing Portfolio Body