The More Things Change, the More They Stay the Same

One of the biggest lies you have been told about the economy after the last 10 months is the emergence of the K economy.

It should need no introduction. It is the talk of the town. The age-old story of the haves and have-nots written for a new paradigm.

And that’s just the thing — it is age old. Any sense that this is something new is entirely based on our limited capacity to draw long parallels while facing novel permutations. It is profoundly difficult to see the forest for the trees when you are, essentially, one of the trees within it.

Harbor no illusions. This pandemic-induced divergence of fortunes may come from something new, but it is an extension of forces long entrenched and actively reinforced.

Any suggestion that it is a transient trend, one that will melt away with enough vaccine doses and some more jobs, is ignorant or woefully reductive at best and outright dangerous on the whole.

If you want to get a real feel for the economy that we’ve been in for the last several decades, there is an easy visualization. Take an image of a horizontal bar magnet’s field and cut it vertically at one of the poles.

Then, since we’re essentially superimposing a time function for the X-axis, we remove any lines once they curve to the left. Unless you can time-travel backwards, those cannot apply to you. 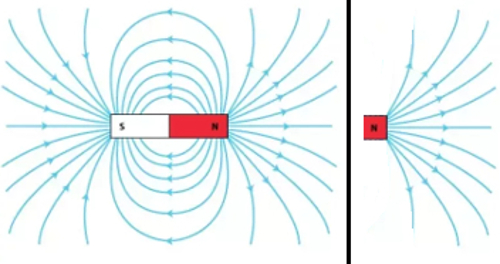 This is the true shape of the economy with regards to wealth generation. Outcomes are determined by accelerating trends, both positive and negative.

And yes, this too is a reductive look at what is really going on right now, especially for individuals. There are too many variables and it is an abstract idea. For example, there is no magic salary that maintains a perfect balance smack-dab in the middle.

Yet the profound impact of compound interest — both that collected by those building wealth and that lost by those paying it — can be visualized by this.

The relative wealth of those that cannot invest a majority of their wealth can also be shown as the investing class pulls away from everyone else with a similar model.

The compromises that people need to make to keep their day-to-day life — with its mortgages or rent, credit payments, and car payments — and the crushing feeling of making short-term decisions that cripple long-term prospects can be visualized this way as well.

Consider some of the trends that we’re just starting to understand and quantify from 2020.

That’s double the 30% that reported the same at the beginning of the pandemic.

Here is a chart breaking down how those funds were used:

While it isn’t quantified, there can be no doubt that a disproportionate number of those older Americans were also forced to do the same because they were put in a bad position during the Great Recession just over a decade ago.

A FinanceBuzz survey concluded that 27% of Americans have slowed or halted contributions to their retirement savings due to the effect of the pandemic on their personal finances.

Twenty-one percent of Americans haven’t started saving for retirement at all, including 45% of the so-called Gen Z and 20% of millennials. (Of note: I’m a millennial and I’m 38, so let’s not pretend this is simply a matter of youthful ignorance for what lies ahead.)

The math is brutal in this age of low-to-no interest rates and an elevated risk of low returns going forward.

MIT professor James Poterba recently presented a compelling case (sorry, this one is paywalled) showing that workers should save 40% of their income to get a lifetime income stream that will covers half of their pre-retirement income, if a 6% annual return over 20 years is assumed.

Even for those that start in their 20s, with current market and economic projections they would need to already be putting away 15–22% of their wages.

Needless to say, this is wildly unrealistic in the real world. Retirement saving rates before the pandemic were about 13% for the top half of the workforce.

I wish the bad news stopped there. Nearly half of retirees report that they fell into retirement involuntarily and earlier than they intended.

Look no further than this chartbook from the Schwartz Center for Economic Policy Analysis for this and more grim facts and figures in easy-to-digest charts to get a feel for what Americans face today.

This concept of a K-shaped economy is a dangerous one that perpetuates a looming crisis in the USA — one that is mirrored worldwide, especially as sovereign debt (as compared with GDP) has skyrocketed an an accelerating pace.

Even nations are not immune to the real fan-shaped nature of the economy. They are going to be buried by interest on debt they pay, while the top tiers of the wealthy collect virtually all of the payments from our taxes and accelerate their own wealth growth.

So much has changed. There is so much to overwhelm us. So much strife, so much intense partisanship, so much misinformation, and so many subversive and deleterious agendas.

Yet so much of that is just variations of age-old themes. So much has stayed the same. The only thing we can do is use what resources we have to bend our own curves upward.

Outsider Club was created in the wake of the Great Recession. The way that the bailout rewarded the entrenched interests of the super rich and insulated financial institutions gave us purpose.

As painful as the past 10 months have been, at the very least they have provided an added clarity and urgency to that purpose. I hope we never lose sight of it.