The Media is Wrong: Fear Inflation

You Should Fear Inflation

For the life of me, I have no idea why the Wall Street Journal dropped the following headline on a leading story earlier this week:

But what in the world are these two doing in the same headline?

Hardly. Just because gold prices are positively influenced by fear of inflation doesn't mean a drop in price is caused by reduction of fear.

The WSJ authors fail to point out that correlation is not causation. And they aren't alone. Similar stories are popping up all over the Web and on newsstands, yet basis for the fear of inflation is not mentioned at all.

Our readers are owed a no-nonsense look at why a fear of inflation is healthy and justified, so that's what we aim to do today...

First, gold prices don't belong in this discussion, so let's get them out of here once and for all.

A handful of factors have led to the price correction over the course of this year, and in the last month in particular...

These factors can explain the broader movements in the market, but not the sharp drop.

Investors who borrowed on margins to buy gold at higher prices had to pony up cash to meet their margin calls. The first positions these traders would sell, forced or not, would be their positions in gold that just became large losses.

These are investors that were borrowing to enter speculative positions for short-term profits from gold, not the investors holding gold for the long-term as an inflationary hedge.

With all of this going on, there is plenty of reason for gold prices to suffer.

Why stretch the story for an unjustified attack on inflationary fears? Besides, which inflation rate are we even talking about here?

The first step to understanding why you should fear inflation comes from how the rate is determined in the first place.

Just think about how a thousand people will be robo-called, and the results of the survey are used to reflect the entire U.S. population. Except the polling isn't random at all. And by picking and choosing which products and services are included — and then tweaking the inflation equation — it is incredibly easy to sculpt the results.

The equation used to calculate inflation is complex, but it is only an estimate.

The official version is just one of many methods that could be used.

Take a look at how previous changes to the government methodology dramatically changes the inflation rate for the U.S. dollar by using a method our government used in the past...

SGS alternate CPI is designed to provide a cumulative look at the difference between the old official inflation methodology and what Congress forces the Bureau of Labor Statistics to use now:

We should hardly trust the official inflation rate as an accurate reflection of what is truly going on...

Simply swapping the current equation for one used by our government up until the last couple decades dramatically changes the picture.

There is talk about changing how the official inflation is measured yet again. Instead of a consumer price index (CPI) based on urban wage earners, we'd be using chained CPI. The reason this would be changed is to reduce Social Security payouts by reducing the cost-of-living payment increases tied to inflation.

So there you have it: self-serving manipulation, regardless of intent. It shows how subjective official inflation statistics really are.

While we have reason to be concerned over the inaccuracy of the official inflation rate, fear of inflation is primarily based on the potential for it to worsen...

The Fed has gotten itself in such a mess that tools and tricks to combat inflation are gone. It has no capacity to tighten the monetary supply, decrease the use of credit or increase the Fed funds rate in the next several years.

However, the Fed can reduce inflation simply by tightening the monetary base. The concept is simple: Reduce the number of dollars floating around, and they become more valuable.

But the problem with our monetary base is that we have yet to even see the inflationary effect from the Fed's QE programs. We'd need a massive reduction to stabilize the long-term effects from QE before tightening the monetary base would have any deflationary effect, and that won't be possible for years, if not decades... 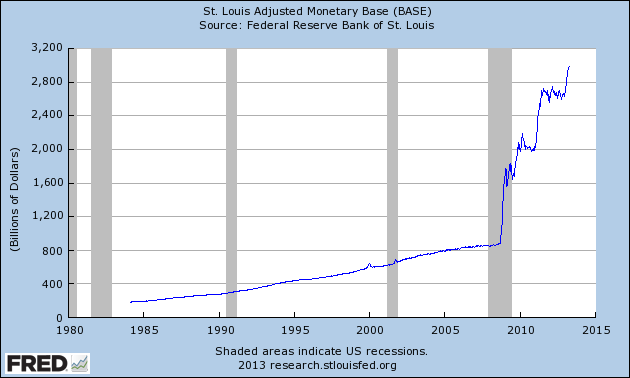 On a related note, the Fed can reduce inflation by changing the reserve requirements from banks (these figures are included in the total monetary base chart above).

Banks are already chafing under new reserve requirements after the meltdown and following the recession. From what we see in this chart, required reserves are already going up as quickly as possible. 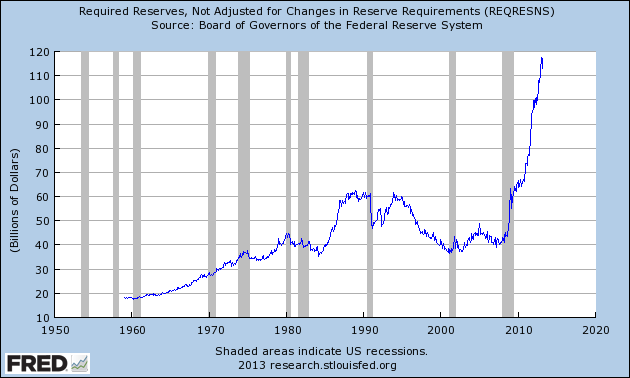 The Fed has a bit more leeway with the Fed funds rate, or the interest rate banks charge each other for loans to maintain their reserve requirements.

The Fed wants to keep this as low as possible to spur economic activity. With a rate at nearly zero, the pedal is to the metal just to keep GDP numbers in the positive...

The Fed would have to start a recession to fight inflation, which it would never do. 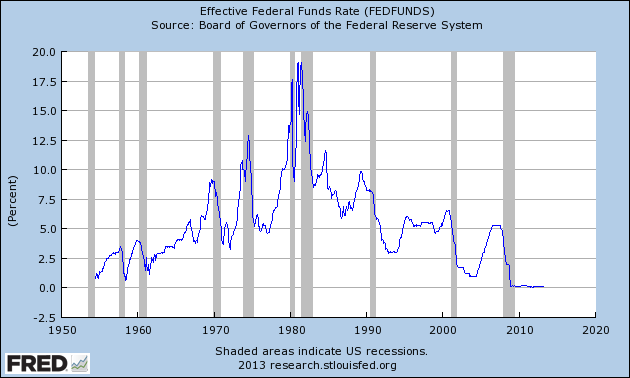 Finally, we have the discount rate, the interest rate charged to borrow reserves directly from the Fed. This is like the funds rate in many regards: It has been pegged just above 0% to spur economic activity for the last several years. The choice is recession or fighting inflation once again.

The Fed has put us on the ropes. We're not down for the count yet, but we have no way to defend ourselves if the punches start flying again.

Be Reasonable. Think For Yourself.

Back in 2007 Bernanke gave a speech in which he stated, “Undoubtedly, the state of inflation expectations greatly influences actual inflation and thus the central bank's ability to achieve price stability.”

Perhaps Bernanke's greatest (and only remaining) tool to fight inflation has been masterfully wielded...

In spite of the evidence to the contrary and the risks the Fed has taken to date, headlines about inflation continue to follow Ben's lead.

For your own sake, don't let Bernanke and his standard bearers sway you with their self-serving agenda.

In my opinion, a healthy dose of fear is a good thing in our situation. It will give investors pause and make them consider the long-term implications of our distorted economy on their investments, which should prompt them to keep contingencies in place to protect themselves.

Gold will be an integral part of that contingency plan, regardless of short-term price swings and the actions of speculative traders. Nothing else can match its inflationary hedge and equity insurance properties.

This isn't likely to change — not until the Fed regains the ability to fight inflation, no matter what Bernanke and media headlines boldly claim.

Adam English for The Outsiders Club