Democrats are trying to frame the passing of the Inflation Reduction Act as a win. And for liberals, the bill is a political win. But this legislation will do almost nothing to reduce elevated consumer prices in the near or long term. 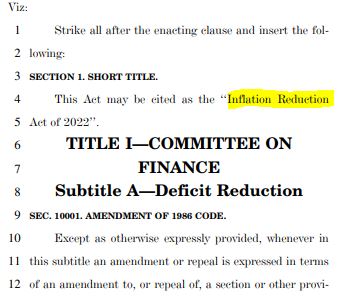 That’s it. Page 1 is the only time "reducing inflation" is mentioned. The only other mentions of “inflation” involve forcing drug and chemical companies to pay “inflation-adjusted” rebates.

So what’s this bill all about?

But the one thing it doesn’t seem to do:Address elevated consumer prices.

I think the bulk of it can really be boiled down to screwing over corporations and high-net-worth individuals to serve the political interests of the left.

The very first thing the Inflation Reduction Act does is create a 15% minimum tax for corporations that make more than $1 billion in income over three fiscal years.

It also introduces a 1% excise tax on corporations for stock buybacks, reinstates and increases the Superfund excise tax on chemicals and imported taxable substances, and requires pharmaceutical manufacturers to pay a rebate to Medicare whenever a drug’s price increases faster than the consumer price index (CPI).

So how does all that help reduce prices at the gas station and grocery stores?

Most economists agree the root cause of current rise in prices is increased consumer spending.

Increasing corporate taxes doesn’t directly decrease consumer spending. There isn’t a single person on the planet who has ever considered a company’s tax liability in their decision to spend money.

The simple fact is that the federal government created an insane amount of new money to pay for COVID relief and now that money has trickled into the hands of consumers, which have been spending like crazy. 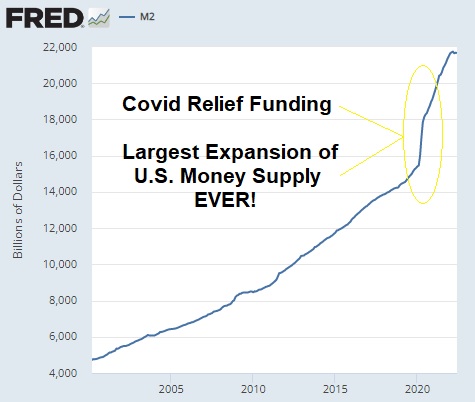 Meanwhile, states have increased their minimum wages and offered consumers tax holidays to specifically spur consumer spending, which has directly added to the rise in prices.

If the government really wanted to reduce inflation, it would aim to reduce consumer spending and…

… but the best way to reduce consumer spending without turning into a facist dictatorship is to raise taxes.

Look, I’m sorry! I don’t want the government to raise taxes any more than you do. Trust me.

But if they really wanted to address rising prices for goods and services, they’d increase taxes. The more you’re taxed, the less you can spend.

Either way, raising personal taxes typically isn’t politically popular — unless you’re a Democrat targeting the “greed” of the wealthy, which the Inflation Reduction Act also does.

The bill allocates almost $80 billion for the IRS over the next 10 years. Half of this is earmarked to target corporate and high-net-worth tax dodgers.

IRS Commissioner Charles Rettig wrote in a letter to the Senate:

The resources in the reconciliation package will get us back to historical norms in areas of challenge for the agency — large corporate and global high-net-worth taxpayers — as well as new areas like pass-through entities and multinational taxpayers with international tax issues, where we need sophisticated, specialized teams in place that are able to unpack complex structures and identify noncompliance. These resources are absolutely not about increasing audit scrutiny on small businesses or middle-income Americans. As we've been planning, our investment of these enforcement resources is designed around the Department of the Treasury's directive that audit rates will not rise relative to recent years for households making under $400,000.

Now as I just mentioned, raising personal taxes would ultimately serve to reduce inflation. And catching tax-dodgers certainly cuts into an individual's ability to spend. But we’re only talking about a very small fraction of the population.

Much of the remainder of the bill boils down “government spending” or “government investing,” depending on how you want to frame it, to support green energy investment and address climate change

The bill allocates a total of more than $300 billion for energy and climate reform, which has been called the largest federal clean energy investment in U.S. history.

Now, of course, there are very good reasons for the U.S. government to invest in renewable energy. I’m not saying the government shouldn’t invest in green energy. But you know what investing in green energy doesn’t do? Address rising consumer prices!!!

In short, I’m not betting on this Inflation Reduction Act doing much to ease inflation.

This morning the U.S. Bureau of Labor Statistics released CPI data, which showed a 5.9% increase in all items (less food and energy) last month compared with the previous year.

I think there’s a good chance consumer prices for energy and food will continue to level off or decline as we go into the fall. But that’s really no reason to celebrate. Consumer prices may never return to pre-COVID levels considering the massive amount of new cash out there.

If you want to protect yourself from continued inflationary pressures, we continue to recommend owning gold.