Let me start off by saying that I love my hometown of Baltimore. It's been invigorating to watch the city come together to bask in the glow of the Ravens' Super Bowl victory...

But now that the parade confetti has been cleared from the streets, reality has started creeping back in: Baltimore is less like the Champion Ravens and more like the drunken, penniless Edgar Allan Poe from whom they take their name.

This was especially evident when Mayor Stephanie Rawlings-Blake held a press conference last week to announce the city is flat broke. What's more, without some major fiscal contortion, we'll be bankrupt in ten years.

According to a recent forecast, Baltimore City would run a deficit of $750 million dollars by 2022 if we keep spending at current levels.

And much of this can be laid at the feet of bloated city employee pensions...

Certainly, city and state pension crises are not unique to Baltimore or Maryland. Municipalities both big and small are being crushed under their weight across the country:

Over all, $99 billion of cities pensions are unfunded across the country... and as seen below, only 6% of health care liabilities are currently funded.

From Pew Charitable Trusts (2009 was the most recent year with complete data; the gap has only widened in the few years since): 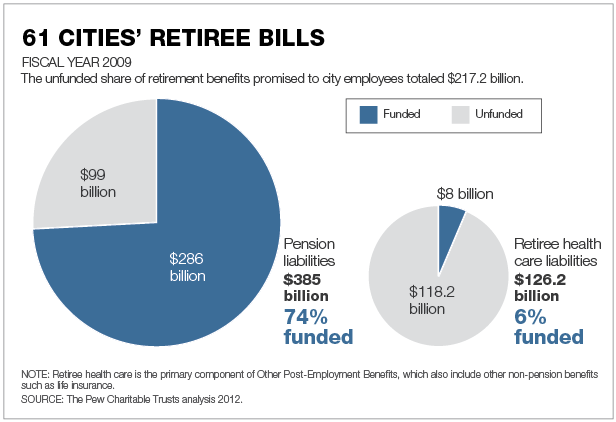 Baltimore has been promising its city employees generous retirement plans for decades knowing full well there was no way it could actually pay them. And unlike many other cities, which stepped in and required their workers to pay into their pension plans, Baltimore's revolving door of mayors just kept kicking the can down the road...

City officials watched slack-jawed as the budget deficits climbed each and every year. Instead of fighting for politically unpopular entitlement reforms, they opted to nickel-and-dime us to try and make up the difference.

The Need for $peed

In 2009 Baltimore rolled out 83 cameras to capture speeding motorists. If you were on the business end of one of these cameras (full disclosure: I was) you got hit with a $40, non-contestable fine.

Besides the creeping Orwellian dread of being recorded everywhere you drive, there was another big problem: The speed cameras were doling out tickets to drivers regardless of how fast they were going!

One man sent the following picture of his speed camera ticket:

As you can see, this fellow is completely stopped at a red light. It doesn't matter — that'll be forty bucks, speed demon.

The city has shaken millions from citizens' pockets with these cameras. Adding insult to injury, the company that sold the city (us, taxpayers) the cameras gets a generous 35% cut of all of these fines. Basically, they're fleecing citizens to pay for the pensions they promised, but couldn't deliver on.

This is but one example of many...

Message in a Bottle

Come July, Baltimore will raise its bottle tax 150% — from two cents to five cents — for every bottle of juice, water, soft drink, and beer.

Not only does this hit the average family buying juice for their kids' lunches and beer for Sunday football games, but it will inevitably cost people their jobs. Rob Santoni, CFO of Baltimore's famed Santoni's Supermarket, said he's already canned eight employees due to the two-cent bottle tax currently in place. More will inevitably follow July's increase. “A drop in sales translates to a loss of jobs in our industry,” Santoni told CBS.

While trotting out an essential proposition for pension reform, the mayor decided to move on yet another penny-pinching scheme that hits the city where really hurts: a trash collection fee.

In and of itself, I'm not totally opposed to usage-based fees — as long as it brings down the total tax burden. Hell, I don't even mind making a weekly trip to the local dump if it's going to save me $500 a year...

But as anyone who has walked Baltimore's streets will tell you, city dwellers aren't very good at disposing of our trash even with the sanitation department hauling it off each week.

Does anyone really think that the masses of inner city Baltimore — 22% of which live in abject poverty — will pony up for trash collection? 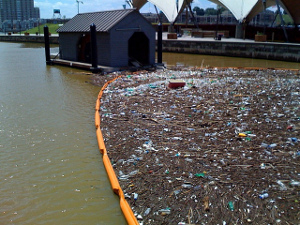 Not a chance. They'll just dump it in vacant lots, alleyways or better yet, right into the Inner Harbor.

Let's see what that does to our tourism windfall...

But hey, at least then we'll have a pungent reminder that our elected officials have no clue how to care for us — or the money we keep shoveling their way.

And that's kind of the point: You cannot count on government, state or federal, to look out for your best interests. You must take control of your own retirement.

And that's precisely what we will be doing from our Baltimore office, a stone's throw from City Hall.

As Charm City's own H.L Mencken once said, “A good politician is quite as unthinkable as an honest burglar.”

You are best off improving your own bottom line and living outside this crooked system...

Whether it's an empty pension or a bankrupt Social Security system, the only person you can rely on is yourself.

And that's precisely what we will be extolling from our Baltimore office, a stone's throw from City Hall: You cannot count on government, state or federal, to look out for your best interests. You must take control of your own finances and especially your own retirement.

We'll be rolling it out in these pages over the next few weeks, so stay tuned...