The Globalists Are Freaking Out. They Should.

On a Thursday afternoon, I walked single file into a room with about a hundred other people. A TV was carted in — one of those big ol’ cathode ray tubes with the faux wooden case.

We watched history unfold. Not that we knew it.

We were all seven years old, minus a handful of teachers. Here is what we saw: 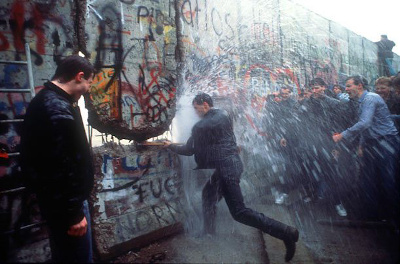 The fall of the Berlin Wall. The inevitable result — according to today’s narrative — of a 40-plus year campaign to prove that one system was better than the other.

What came next was a mixed bag, not that it dissuaded those in the ivory towers of economics and geopolitics from taking a victory lap. The problem is the victory lap never ended.

Schadenfreude added to an echo chamber that insulated us all from the reality that this can and would inevitably change again.

A powerful psychological combo with profound implications for the inertia we’re seeing today.

Globalists are looking at the world today as if it is a tragic fragmentation of what was. As if a new standard was set in stone.

Decades of commodity extraction gave the appearance, over here on the good side of the lopsided equation, that some sort of equity was in play. Money flowing out and stuff flowing in, fair trade panning out. Everything in it's right place.

We thought we were setting a better example. Instead what was evolving on the other side of the equation was worse. More concentration of power. Less equity shared. All recursively and perversely marketed to sell it to us. Or more specifically, the handful of officials that reported back that all was well and to keep doubling down.

Even worse? There is this pervasive sense that they are taking something away from us now. The promise of a better tomorrow scuttled by fair-weather friends. After all we did.

This is a farce. An insidious variation of hubris. Gossamer threads that never were fortified, though we thought we would, as if we could manifest them by sheer force of conviction.

Of this there is no doubt, someone was going to take it all. There was never anything done to truly push back.

I’ll defer to "Planet Money," which published a great two-parter about the rise of the Russian oligarchs and how the promise of globalization of Russian commodities fueled what is happening today.

This was doomed to fail. By design or flaw, intentional or not.

The world before the world wars was wildly fragmented by politics, embargoes, and tariffs. Things got a little crazy for a while. The Cold War was built on economic blocks with limited trade. Then the other half of the world became a bargain bin morass of cheap stockpiles and slush funds.

We have come to count on flimsy metrics to support this concept that all things should be as cheap as possible for everyone at all times, in spite of just a handful of decades of reprieve amidst centuries of geopolitical chaos.

We count on headline numbers for the worldwide trade of commodities. One number for steel. One for copper. Two for oil? How complex! How complacent we have become.

The London Mercantile Exchange? Forex markets? Great for speculation and for greasing the wheels, but ripe for manipulation and corruption.

They're bloated examples of how "the other half" of the world opened up to any money that could or would pour in by the handful of those that controlled the flow: capital, narrative, and analysis..

It is a decadent view of the world. It is fundamentally flawed. It will fail. And if it hasn't yet, as both sides of any conflict — the current Ukrainian War included — start to truly affect us, we're not prepared for it.

This is a fundamental failing of globalism. It supports cronyism and damns all parties involved to generations of resentment. It encourages resistance, justified or not, on both sides about anything and everything.

It's original sin was that its architects did everything they could to avoid admitting that they were setting up a zero sum game from the get-go. Maybe it was always doomed to be an "us versus them" scenario, but it certainly wasn't sold that way.

The fundamental pressures that push against subjugation via "soft" or "hard" power will always wear away, like water eroding away bedrock. Russia is testing how fragmented it is now. Don't be so sure it isn't in an advantageous position yet. It will not be the last to push back.

Let’s not kid ourselves into thinking that the last 30 years of a path of least resistance for a select few would never be contested.

The world was always bound to change. It was bound to be painful. There are real costs to what should now be considered fallout from a failing global system.

We need to move and not hunker down. The world is changing and we're going to as well. Like it or not.

Stay tuned. We've been talking about a lot of this recently, and we have a lot to offer soon.