The Giants Have Fallen

Why this cannabis company is set to conquer in the wake....

I trust many of you — religious or not — are familiar with the Book of Job.

Job served as the poker chip in a disturbing bet between God and the Devil, to see just how far a man could be pushed to maintain his faith.

Poor Job's faith was tested in some very serious and horrific ways: his sheep and servants were burned alive, his children were all crushed to death, and Job himself was then stricken with horrible sores all over his body. And this all happened in one day!

Not to be too dramatic, but — like Job — cannabis investors have been tried and tested time and time again this year.

We’ve seen a scorched earth approach to the entire industry. David and Goliath have both been slayed. The giants — like Canopy Growth — have fallen, while the small-cap peasants have had their slingshots taken from them forever.

Only the strongest remain.

But as Job was rewarded with eternal salvation for his trials and tribulations, so will we be once the forest fires have cleared and green shoots emerge once again.

But enough biblical flourishes. All I want to do is thank you for your courage, and urge you to be patient.

Now, I know that we don’t have too much to be thankful for in cannabis investing this year. I won’t sugarcoat it — it’s been a torture hell-ride. I’ve never seen anything like it in my investing career.

Thankfully for new investors, there hasn’t ever been a better time to buy cannabis stocks since 2015.

I believe that the sector has finally hit rock bottom, and you need to start planting seeds in this fertile soil…

There are two big reasons that the cannabis industry will rebound next year.

Last week, a historic vote was made in the House of Representatives. For the first time in history Congress voted to end the federal prohibition of cannabis.

It passed with a 24-10 vote. That is what I call better than bipartisan.

The MORE Act removes the marijuana plant from the federal Controlled Substances Act, thereby enabling states to enact their own cannabis regulations free from undue federal interference. The vote marks the first time that members of Congress have ever voted to federally de-schedule cannabis.

The MORE Act comes on the heels of the Secure and Fair Enforcement (SAFE) Banking Act, which already cleared the House on a 321–103 vote.

That — in and of itself — is a huge step forward in allowing the industry to operate exactly as it should: as a legitimate business. The legislation would protect banks that service state-legal marijuana businesses from being penalized by federal regulators.

What’s more, the bill passed with broad bipartisan support. Almost half of Republicans voted with the Democrats to get it passed. It also has the support of over 50 state banking associations, the National Association of State Treasurers, the top financial regulators of 25 states, a majority of state attorneys general, and governors of 20 states, among others.

Every step helps... and if the SAFE Act passes in the Senate, that will be more like a leap. Considering that 33 Republicans already signed on as co-sponsors, I'm counting on it.

Once the U.S. federal situation becomes more clear, many of our U.S. positions will be in much firmer shape. It could unleash a 50-state monster that could add countless billions to the market in short order.

The next reason that cannabis stocks should rise from the ashes, is that our neighbor to the north should finally start putting its act together...

Canadian cannabis legalization has been a disaster…

For one, they have taken forever to figure out the “Cannabis 2.0” situation that would allow beverages, edibles, and many other popular cannabis derivatives. While they finally allowed it last month, it will still be another month or two before companies can start churning out cannabis products that customers are begging for…

“The edibles market is estimated to be worth at least $1.6 billion a year in Canada, with cannabis-infused beverages adding a further $529 million,” according to Jennifer Lee from Deloitte.

“The introduction of cannabis-infused edibles will threaten the alcohol industry.”

Thankfully, Cannabis 2.0 has the green light, and will begin to capture that market for the first time.

The other major problem has been availability.

Even if the country would have allowed such popular products, it wouldn’t have had enough places to sell them. There has been a serious lack of retail distribution.

For example, the number of stores in Ontario is ridiculous. The province has almost 15 million people but only has around two dozen stores. That’s one shop for every 600,000 people.

When I was in Ottawa, I could only find three shops in the vicinity that actually carried cannabis products. In Canada’s largest city — Toronto — there are only around 10 stores open.

Clearly that is no way to run an industry. Imagine how beer sales would slow if you had to drive 10 miles every time you wanted a six-pack?

This is going to change quickly.

Ontario will soon allow far more retail stores, with some projections adding 40 or so new stores a month, starting in January. Once that bottleneck is loosened, Canadian companies will finally be able to unload the massive supplies that have been literally and figuratively weighing them down.

And I have the perfect way to play it...

Many of you know that I was the first financial newsletter editor to tour Canopy Growth — way back in 2013 — and tell the world about it. That brought my readers 3,220% at the top of the frenzy.

I’ve been looking for the next one ever since. And I’ve finally found it.

This company I vetted is perfectly aligned for Cannabis 2.0 and the explosion of new stores opening up in Ontario.

It is also Quebec’s largest supplier of marijuana, and holds a contract from Quebec to manage the distribution centers that process online orders for years to come.

That is some serious built-in revenue that can’t be touched by competitors.

Not to mention that it has plenty of exposure to the U.S. market, once the politics shake out as I predict.

On a recent trip to visit the facilities, I brought my camera, a video guy, and a notebook full of hardball interview questions.

I want to show you on-the-ground video footage of my tour, which you can watch right here.

I've told you enough already, but just wait until you see what's behind this door... 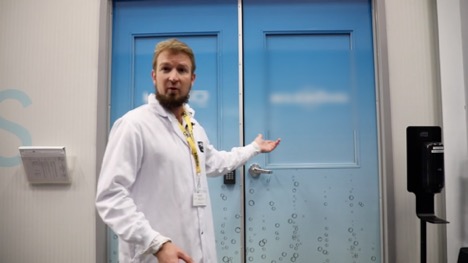 Happy Thanksgiving to you and yours.

Marijuana Is Coming to Mexico
As it stands now, Canada and Uruguay are the only two countries that have legalized marijuana for recreational use. But later this month they’ll be joined by a third. Outsider Club editor Jason Simpkins discusses what legal Mexican marijuana means for investors...
Kiss My Hass!
The numbers speak for themselves; avocados are big business. Outsider Club editor Jimmy Menegel explains that while profitable, the avocado pales in comparison to the growth of another green export…
Investing in Marijuana Without Getting Burned
The marijuana industry has rewarded scores of investors with life-changing gains.