The Federal Reserve has one nasty “temporary” problem.

Instead it has a problem with the things it says will be temporary being temporary at all.

Right now inflation is the clearest example, but really this has been going on for a while.

And, from the look of it, it will be going on for far longer.

Nearly 13 years ago, the Fed started a temporary program born from the financial crisis.

Quantitative easing kicked off as a way to soak up toxic assets, namely mortgage-backed securities (MBS).

While the stock market recovered and the housing crisis was unwinding, the supposedly temporary QE did not.

Instead QE 2 was added to the mix in 2010, soaking up Treasuries. Next was QE 3, which kicked off $40-billion-per-month open-ended MBS purchases.

Purchases came to a halt at the end of October 2014, but it was hardly a true end to the program. After all, the Fed had racked up $4.5 trillion on its balance sheet.

A true end to this supposedly temporary action would have seen a good $2 trillion in Treasuries and about $1.7 trillion in MBS slowly sold off, or at least slowly removed as they matured.

That kind of started to happen, but it didn’t count for much. Behold how much of a taper actually happened: 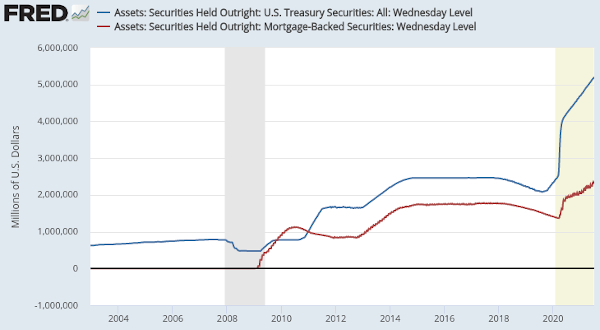 About $300 billion of each type of security came off the books out of the combined $4.5 trillion total in Fed assets.

The “temporary” situation stretched on for a dozen years, and was never resolved during one of the biggest and longest bull market rallies in history.

Instead it just kept coasting along until we inevitably hit the next big black swan event — the current pandemic — and the Fed decided to double down.

Now it owns $7.5 trillion in Treasuries and MBS with no end in sight.

The Fed now owns something like 15% of outstanding Treasuries with that number steadily rising. Virtually all medium- to long-term debt issued by the U.S. Treasury is going straight to the Fed.

We still don’t entirely know what it even means for a government to functionally owe itself money, but I see no way that isn’t a circular way of cooking the books.

Sure, the Fed is talking about tapering again, just like it did in 2013 and 2014. You can see how effective that was at resolving this mess in the chart above.

As for the supposedly temporary inflation — a mere blip on the radar the way the Fed talks about it — we just saw some very disturbing numbers.

And the U.S. government is borrowing a trillion dollars a month. A whole lot of that is being funneled into retirement accounts and, as mentioned above, the Fed’s balance sheet.

The standard line about this being a temporary phenomenon simply can’t be explained away any longer.

We shouldn’t hold out much hope for the Fed to meaningfully address the problem either.

Instead we should do what we can to prepare for inflation building up higher and for longer than any of the talking heads will mention.

Now is the time to check it out, before everyone realizes what is going on and it starts to bite into their wealth.