The Fed Is Now Fixing a Problem That Doesn't Exist

The Federal Reserve, guided only by its own decree, made a surprise announcement yesterday that it will be diving into direct corporate bond purchases, including junk bonds.

We knew this was a possibility, and the Fed has already bought up about $5.5 billion of ETFs that track bonds, but this is a different beast.

This is part of a $250 billion program, the Secondary Market Corporate Credit Facility, that directly intervenes to prop up the market, a market that doesn't need it.

So, why is the Fed even doing this at all?

Analysts are widely stumped as to why this is happening now. After all, the debt market seems to be working just fine without intervention.

Yes, companies are being knocked down in their credit ratings. That isn't the Fed's concern though. What is its concern is if the markets are liquid and spreads are under control. Both are true now and have been that way for months.

There have been rocky days for sure. Back on March 6, the average yield for investment-grade debt was 2.22%, the lowest ever in Bloomberg Barclays data going back to 1972. By the end of the worst day in the bond market in a decade, the investment-grade bond spread widened to 144 basis points while 10-year Treasuries fell 25 basis points to a record low.

Since then though? It's been amazingly calm even for less troubling times. Average all-in rates fell or stayed constant for 21 consecutive trading sessions through June 10. They never drop by more than 9 basis points at a time.

Bond issuers and buyers seem to be having no problems with what was going on before the Fed jumped in yesterday.

There was a surge in corporate debt that banks and investors were willing to purchase. Rates even dropped, as mentioned above, showing the demand was pretty solid. U.S. nonfinancial business debt increased in the first quarter by $754.8 billion of debt, equivalent to an 18.8% annualized rate, the most in records dating back to 1952.

That pushed corporate debt over a major milestone. With $16.8 trillion of borrowing, nonfinancial corporations have more debt outstanding than all American households combined.

Private investors just poured $14.6 billion into funds that buy U.S. investment-grade debt, high-yield bonds, and leveraged loans in the week that ended June 10. That was the second-highest inflow on record behind only the week ending on June 3 with $15.6 billion, according to data from Refinitiv Lipper.

Yet here comes the Fed to save the day.

So what is going on? Why now?

It seems pretty clear that the Fed is only doing this to double down on its self-decreed role in propping up the stock market.

Driving down yields with this artificial demand pushes more and more money towards stocks, and the Fed has a solid decade of evidence that its bond market shenanigans work quite well in that regard.

Yet there is a profound cost that will come with it and will come due. The Fed, in spite of the incredible bull market up until early this year, was never about to meaningfully reduce its balance sheet.

Look at that pitiful balance sheet decline starting in 2018 before the Fed decided nothing matters anymore and dusted off the printing presses. 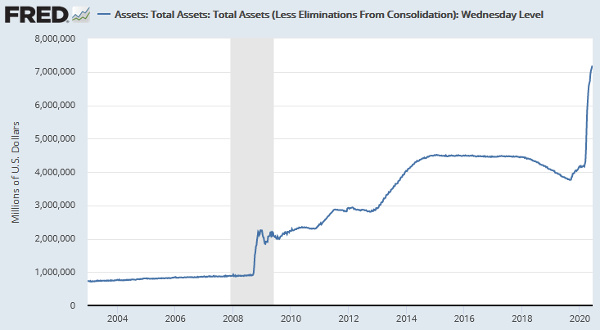 That is the role the Fed is taking on now with all other concerns lagging far behind. It is a dangerous one for it and us. After all, the Fed doesn't suffer losses. The taxpayers do.

This is effectively the last trick up the Fed's sleeve, and it is pulling it out when it isn't needed and when a much longer and deeper economic trench lies ahead.

Expect this credit scheme to be extended. Expect it to be expanded beyond the already mind-boggling erosion of free markets it represents.

Expect investment-grade bonds to dive to new record lows and provide no stability for investors who know the current market levels are profoundly fragile.

Finally, expect more and more investors to move to one of the few safe havens that hasn't been manipulated — gold. There is a reason why gold prices have done so well while the market rises, and it will only accelerate from here.