The Elephant in the Room for California’s Bold Plan

Never one to turn down some kind of political theatrics to drive home a point in a ham-fisted way, here he is signing an executive order right after his announcement: 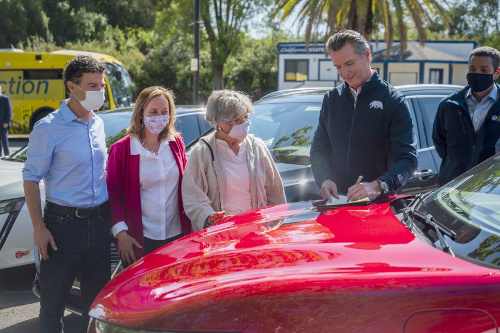 So what’s with the parking lot pageantry?

That’s an electric vehicle and the governor was signing an executive order to completely phase out gasoline-driven light passenger vehicles.

If this stands, by 2035 the phase-out period will be over.

There is a problem though, an elephant in the room, when it comes to reducing pollution from California’s notoriously congested, smoggy roads.

This chart from the EPA shows where Newsom's executive order can and will fall short: 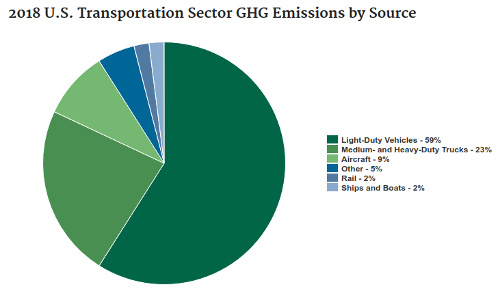 If California wants to be serious about cutting emissions, it cannot ignore larger vehicles. Yet the executive order, as bold as it may be for smaller vehicles, simply falls short in addressing anything else.

It would require medium- and heavy-duty trucks to be zero-emission by 2045 where possible.

It is prohibitively expensive and adds too much weight to a standard semi. Plus, the added weight limits range — something that is make-or-break for supply chains crossing the expansive western U.S.

It just so happens that exactly what California and Governor Newsom need to truly pull off this massive transition has been in the works for some time.

Last week, the creation of the Western States Hydrogen Alliance was announced. Made up of players in the rapidly expanding hydrogen fuel cell sector, it aims to increase the development and deployment of fuel cell electric technology across 13 western states.

Its focus will be on exactly the kind of heavy-duty vehicles that may never be economically viable to power with batteries: electric trucks, buses, locomotives, vessels, aircraft, and off-road equipment.

“Hydrogen fuel cells will power the future of zero emission mobility in these heavy-duty, hard to electrify sectors. That fact is indisputable. This new alliance exists to ensure government and industry can work efficiently together to accelerate the coming of this revolution.”

While the alliance’s goals may be ambitious, they aren’t unprecedented. We just haven’t seen the same development and deployment of hydrogen fuel cell technologies as other parts of the globe.

Toyota is building an entire small city for its workers that will host vehicles that exclusively run on hydrogen. It is also partnering with a Japanese commercial vehicle maker, Hino, on a fuel cell semi truck.

Over in Europe, we’re seeing deployments on a wide range of vehicles. Ferries, trains, buses, semi trucks, commercial shipping boats, even high-tech German submarines are already out in the real world or will be within a couple short years.

The world’s first hydrogen-powered passenger flight was even just accomplished in the U.K., with the promise to radically change the heavily-polluting commercial air travel industry over time.

If you can name a kind of big vehicle, fuel cells are being put in it and already showing distinct advantages over batteries.

As the technologies advance and scales of economy kick in, it will only move faster and get bigger.

McKinsey predicts that, for commercial shipping, fuel cells could reach price parity with diesel fuel as soon as 2030, a good 15 years before California’s new executive order wants heavy vehicles on the road to be zero emission “where possible.”

Fuel cell technology is on the cusp of a major move and a ramp up to hundreds of billions of dollars in new commercial fleet investments.

The Western States Hydrogen Alliance will be a big part of that.

And the readers of The Crow’s Nest will be well positioned to take advantage of it. It just so happens that they’re already seeing strong gains from one of the companies in the alliance, with plenty more to come.

If you want to see the research Jimmy Mengel shared with his readers, you can get started here.