The Dominoes Are Falling

“The global monetary system needs to be reformed, I believe there will be a Bretton Woods-style meeting in the next couple of years, one that will be forced upon us by mathematics.

"Whether it’s Japan, Europe, or here in the U.S., the dominoes are starting to tip over. Today it’s Deutsche, tomorrow it’ll be someone else until soon it’s an entire region that implodes and needs “restructuring.”

The opposition ticket of center-left Alberto Fernandez, whose running mate is populist ex-leader Cristina Fernandez de Kirchner, secured 47.7% of the vote, with roughly 99% of the ballots counted.

Meanwhile, Macri and his running mate, Miguel Angel Pichetto, received 32.1% of the vote.

The result? 'Restructuring’ is in the cards.

Argentina’s peso shed nearly 25% of its value to around 59 per U.S. dollar shortly after the open of trade. The peso had been at 45.25 at its previous close.

According to Reuters, the peso then hit a record 65 per dollar to mark a 30.3% loss.

The election result had earlier prompted Argentina’s euro-denominated bond to fall almost nine cents lower, according to data reported by Reuters. The yield, which moves inversely to price, rose almost 3%.

Argentina’s presidential election on October 27 is looking more and more like a referendum against economic policies that have been received as far too conservative.

The business-friendly president had promised to continue with the same austerity-driven approach if re-elected later this year.

That is simply not going to cut it this time around. Whether in Argentina, the U.S., or in Europe, austerity is not going to be a policy that is embraced by a populace already suffering economic contractions.

The Argentine market is in a free-fall as I write this because of the direction that future policy could take.

Fernandez’s win puts the center-left candidate on track to secure a congressional majority in presidential elections later this year.

That would allow Fernandez to undo economic reforms put into place by Macri’s administration — including measures related to the International Monetary Fund’s bailout package.

Meanwhile, in Hong Kong, all flights have been cancelled due to the most serious protests in decades.

The protests in Hong Kong are not directly linked to the economy but are a result of the same trend; the lack of faith in government and a populace no longer willing to sit idly by while the powers that be sort it out.

The last thing I wrote in the same article I referenced at the beginning of the piece was that:

“Gold will see new real highs between $3,000 to $5,000 within the next 7 to 10 years, but be careful what you wish for because the pain that comes with that will be severe for those not positioned.”

Look at a chart of the gold priced in Argentine pesos over the past five years. For the people of Argentina, the next restructuring began yesterday. It won’t be the last. 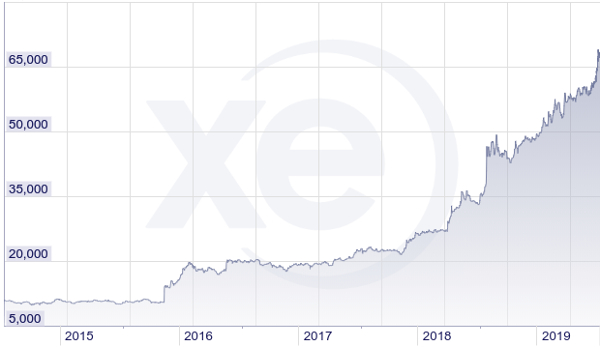 James Dines: Have Summer Doldrums Begun?
With stock indices getting back into all-time high territory, but a massive amount of contradictory economic indicators and outlooks, we turn to Mr. James Dines and his experience to take a cold, hard look at everything that's going on.
Gold and a Warning
Gold will see new real highs between $3,000-$5,000 within the next 7 to 10 years, but be careful what you wish for because the pain that comes with that will be severe for those not positioned...
What’s Next For Gold Prices?
By this point, you probably know gold is making a major breakout, having surged to a six-year high. Outsider Club editor Jason Simpkins discusses why it's happening and how investors can take advantage...
Investing in Marijuana Without Getting Burned
The marijuana industry has rewarded scores of investors with life-changing gains.