More than 70% of foreign exchange reserves around the world were denominated in U.S. dollars at the end of 2001.

Since then that percentage has trended down.

According to the most recent data from the IMF, the percentage of dollar-denominated reserve assets fell to 59% at the end of 2020, sparking fresh concerns over the U.S. dollar's reserve currency status.

Prominent hedge fund manager Stanley Druckenmiller criticized the U.S. fiscal and monetary policy in a recent interview with CNBC saying, “If we're going to monetize our debt and we're going to enable more and more of this spending, that's why I'm worried now for the first time that within 15 years we lose reserve currency status and of course all the unbelievable benefits that have accrued with it.”

But what is a reserve currency? And why does it matter that the U.S. dollar is losing ground as a foreign exchange reserve?

A reserve currency is simply any foreign currency held by central banks and major financial institutions.

This money is used for international payments, investments, debt obligations, etc. — basically whenever one nation transacts with another.

How the greenback became the world's primary reserve currency has a long and complicated history beginning with nations abandoning their gold standards to pay for WWI and ending with the Bretton Woods agreement nearing the end of WWII.

Today, however, the dollar's status as the main reserve currency is mostly based on the dominance of the American financial markets.

So why is it so important?

Well, the dollar's status as king reserve currency gives the United States many advantages — advantages most people around the world might consider unfair.

The dollar's status as the main reserve currency means the U.S. pays lower interest rates than other nations on assets like government bonds. It also protects the United States from a balance of payments crisis, whereby a nation is unable to pay for essential imports or services.

These advantages have long been criticized. In fact, immediately after the Bretton Woods system was put in place in 1944, the USD status as the world's main reserve currency was called “America's exorbitant privilege” where foreigners “see themselves supporting American living standards and subsidizing American multinationals.”

Today the term “exorbitant privilege” is still specific to the U.S. dollar's role in foreign exchange.

Exorbitant or not, the fact remains that if the U.S. were to lose its status as the main reserve currency, the nation would lose those advantages.

Being that most people don't live in the United States, I would bet most people would applaud the end of the USD as the world's main reserve currency. But there's really much more at stake for America at this point than just losing a few unfair advantages.

Most U.S. dollars are not in the United States. According to the last IMF data, there were just over $7 trillion total in foreign exchange reserves around the world. To give that some perspective, the Federal Reserve Bank of St. Louis estimates that approximately two-thirds of all U.S. money is held outside of America.

What it all means is the greenback's status as the primary reserve currency has been (and still is) a major driver of demand.

And that could have serious effects on the value of the USD, which could have a ripple effect across global markets. So there's more at stake than just America losing a few unfair advantages.

Many people right now are conflating the current problems facing the United States as a result of QE aimed at addressing the COVID-19 pandemic with the decline in the percentage of global currency reserves denominated in USD. But remember, that's been happening for two decades.

The main driver of the decline since 2001 has been the proliferation of the Euro, which was just introduced a few years prior. Today the Euro is the second most held foreign exchange reserve around the world. The Japanese Yen is a distant third. 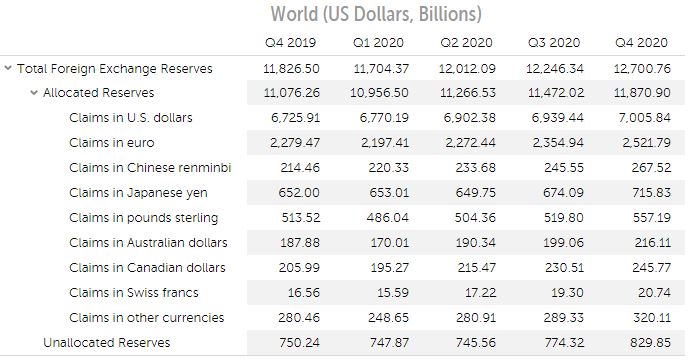 Point is, the biggest threat to the dollar's king status is really another major currency like the Euro.

... And, NO, that would never be Bitcoin. Central banks and major financial institutions would make their own digital currencies to use internally before using unregulated and manipulable Bitcoin.

I do believe the fallout from COVID fiscal and monetary policies will likely contribute to eroding some of the dollar's standing as king. But generally speaking, the U.S. dollar's king status is fairly safe for the moment.

However, remember that even losing a little ground in the reserve currency field means losing a lot of demand. And that could have big effects on the value of the dollar. Prepare accordingly.