The Defining Showdown for the Next Several Decades

I’m increasingly sure that what we’re seeing in the labor market will define the next several decades.

I’m already convinced that what we’re seeing is something none of us, especially those in any position of power, are equipped to handle.

This is nothing short of a war of attrition.

Can the fringes of the labor market affect real change? Can businesses rein in, or even just define, the profound mismatch between their expectations and those of their applicants?

For now, it seems like the answer is an emphatic “no” but something has to give.

Let’s look at labor first. The narrative out there is that people on the low end of the income scale feel they have more flexibility because they have more “free money” at hand.

This is true! They have seen a windfall. I'm going to be pulling these charts from a great publicly available document from JPMorgan Chase. 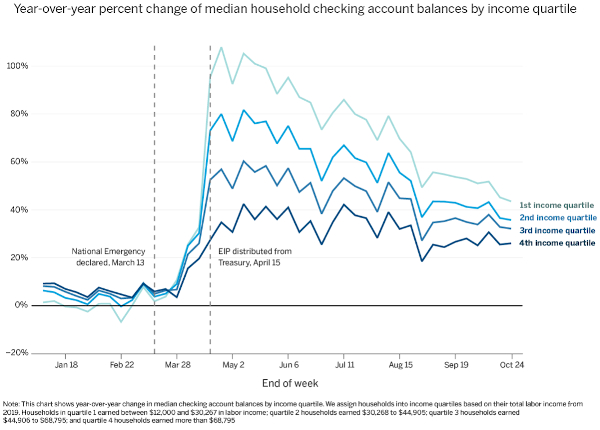 This is also wildly misleading. Virtually 100% of poorer people's money they can draw on, both cash and credit, is in a checking account. There is no refinancing for renters. There are no retirement savings for a last, desperate fall back.

The chart also shows a rapid falloff in percentages, which you would expect from a low initial balance. This is probably a better chart to show. Yet still, I find it misleading. 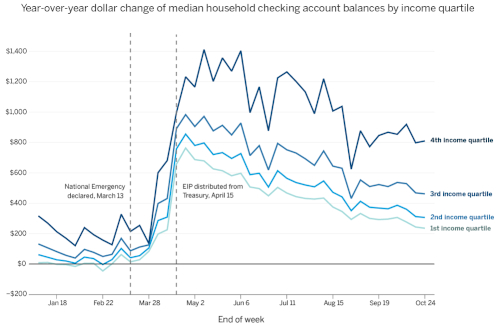 Fourth quartile homes make over $68,795 per year. That is not much, but it's a whole lot better than $12,000 to $30,267. The simple fact is that people in the fourth quartile probably didn't need to add more to their checking accounts. Better to funnel it elsewhere where their money can make more money. Meanwhile, the poor are rapidly losing what little extra they have.

Plus renter evictions are just now hitting the courts. One in my building hasn't paid for six months and the court is so jammed that the notice posted at the end of September won't go in front of a judge until December.

A lot is missing from this data set, but it is clear that the excess cash is well on its way to being a thing of the past. Also keep in mind that the lowest quartile has less than $1,000 in their account. That surge represents a month's rent for a small apartment in modestly priced towns.

Can low income workers really afford to be pickier about jobs for long? Nope. Is the Great Resignation, as some are calling it, a change in paradigm? Not once those balances are depleted.

The picky low income-job quitters and seekers have, on average, just a month or two to hold out. A short illusion of autonomy, at best.

On the other side, numbers are also tough to get a hold of, but we can see some trends playing out in aggregate that don't look good for employers. On the largest scale, costs are surging in a way loosely correlated with past recessions. 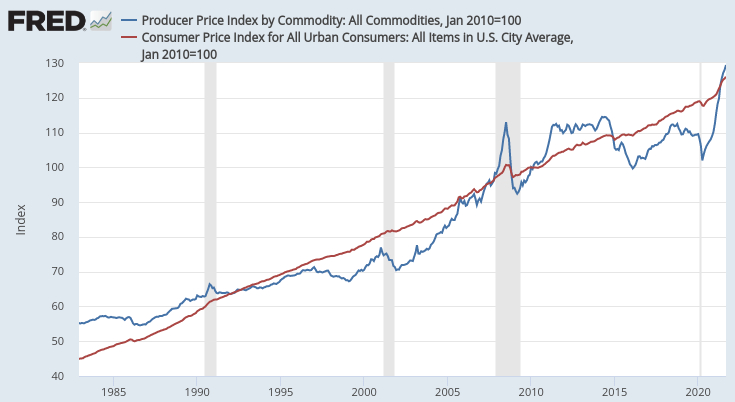 One way or another, consumer prices will catch up in the end. That or a lot of businesses won't sell things anymore because they will not exist.

This isn't too bad for large regional, national, or multinational companies. After all, they can still borrow money at historically low rates.

A prime example of how this mismatch is playing out can be found in the housing market. Small landowners that rent units have virtually no access to any lending. Large companies are snapping up housing inventory and have an arbitrage play between the locked-in low interest rates for borrowing that expands their property portfolios and the yearly increase in rates they can charge.

The same goes for large companies that can soak up higher food and energy costs and secure large, long-term orders from suppliers. Your local pizza shop can only secure a couple thousand in credit lines.

So the war of attrition goes on. Some workers that will desperately need jobs in a very short time frame are pitted against a lot of small businesses that can't afford to pay higher wages and soak up their rapidly inflating operating costs.

Who will win? No one knows yet. The Biden administration is certainly sympathetic to workers over owners, and its policies are disproportionately affecting small business owners as top-down, half-baked, one-size-fits-all policies leave them out in the cold.

The macro economics clearly support large companies while debt is still cheap to finance, but the Fed can't keep up its nearly unlimited support for that for long. And, to be frank, I think the Fed has had about enough of Congress' abdication of responsibility and potential for making long-term changes that don't amount to balance sheet tricks.

I'd bet on the government being unable to do anything substantial, small businesses continuing to lose money due to labor shortages, workers capitulating in the next several months with some marginal improvements, and a lost year in 2022 as year-over-year GDP and other headline metrics collapse and hint at a new era of stagflation.

I could be way off, but a couple things are clear. Extra inflation is baked in and needs to be passed on from PPI to CPI. Operating costs for businesses will go up. Interest rates on debt for all but the largest, most secure companies will as well. That will get passed on.

That will negatively affect the value of the dollar, and we're all going to have to muddle through a couple tough years after this pyrrhic showdown fizzles into a "coulda shoulda" moment that leaves everyone bruised, if not broken.