If you've bought a new iPhone in the past year or so, you've probably noticed something was missing from the box.

Beginning last year with the iPhone 12, Apple phones no longer come with a wall charger or headphones. 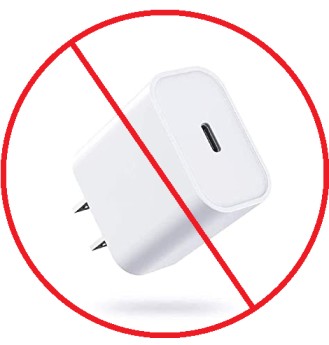 Of course, you can still buy them separately. But no longer do iPhones come new in the box with a phone charger or headphones. The headphones are one thing, but the charger seems pretty necessary.

The company says the move not to include these items is a way of lowering carbon emissions. And I'm sure it does. But it has also served as an incredible cost-cutting measure for Apple. And it's a move you might see a lot more of from the consumer electronics industry in the near future.

Consumer electronics (iPhones, laptops, smartwatches, etc.) and their electric accessories (chargers, headphones, etc.) all contain tiny amounts of elements from a group known as the "rare earths." Problem is, these rare earth elements are not easy to come by.

The rare-earth elements — sometimes called rare-earth metals or rare-earth minerals — are a group of 17 chemical elements which are mostly used as catalyst materials but are also vital components in most of the technology we use every single day. They're used in the production of consumer electronics, including rechargeable batteries, GPS units, televisions, speakers, magnets, lighting, the electronics and accessories already mentioned, and much more. 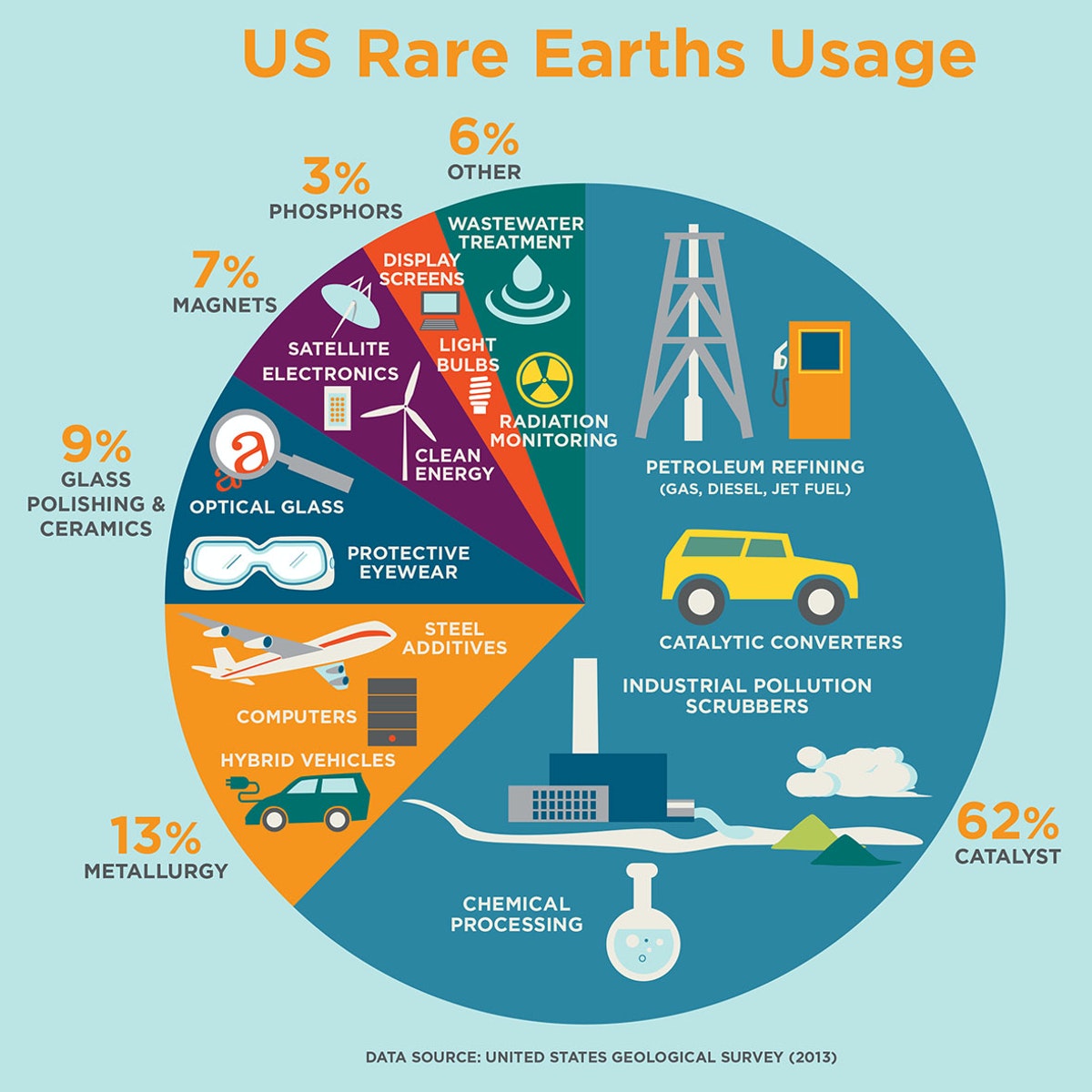 Despite their name, most rare-earth elements aren't exactly "rare." In fact, cerium (C) is as abundant in the Earth's crust as copper.

What is rare about rare earths, however, is the economically feasible mining and processing of the material.

If you've read anything about rare earth elements in the past two decades, you know that China dominates the REE market. Right now, China accounts for more than 80% of the world's total rare earth production.

Between the mid-1960s and mid-1980s, the Mountain Pass Mine in California supplied over 85% of the world's REE needs by itself. 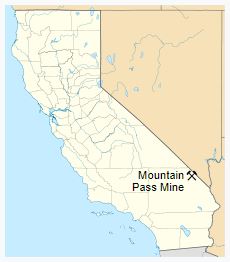 But that all changed in the 1960s with the proliferation of the hottest new technology of the time: color TV.

Color television was developed early in the 20th century, not long after the first black-and-white televisions were built. But it wasn't until the mid-1960s that the networks (all three of them) began broadcasting most of their programming in color and that color TVs began selling in large numbers.

According to estimates there were around 1.6 million households in America with a color TV in 1964 — representing only about 3% of households.

Only four years later, that number would jump to 13.7 million American households with a color TV — about 24% of U.S. households.

And sales of color TVs only increased from there.

Number of Color Televisions in America

So what do color TVs have to do with rare earth elements?

Well, the rare earths yttrium and europium were elements used as phosphors to make the red color in tube televisions.

That's right. Anytime you saw red on an old CRT television, you saw yttrium oxide-sulfide being activated with europium. Superman's bright red cape... the Batphone... Dorothy's ruby slippers... and yes, even Rudolph the Reindeer's nose... these colors were the product of rare earth elements.

As sales of color TVs increased in the 1960s and into the 1970s, so too did the demand for the rare earth elements yttrium and europium used to create the red color. Fortunately for American manufacturers, the industry had a good domestic supply of rare earth elements at the Mountain Pass Mine.

Rare earth production at Mountain Pass ramped up through the 1960s and 1970s. By the mid-1980s, the Mountain Pass mine not only provided domestic supplies, it also supplied some 85% of the world total demand for REEs.

But that was when everything changed for the entire rare earth market.

That was a big problem for rare earth miners because it meant much higher costs associated with mining and refining rare earth elements.

Over the next few years, the production of rare earth elements from Mountain Pass would fall. Nevertheless, the demand for REEs was still growing as more and more people worldwide bought televisions and new applications for rare earth elements were found.

That's where China steps in. 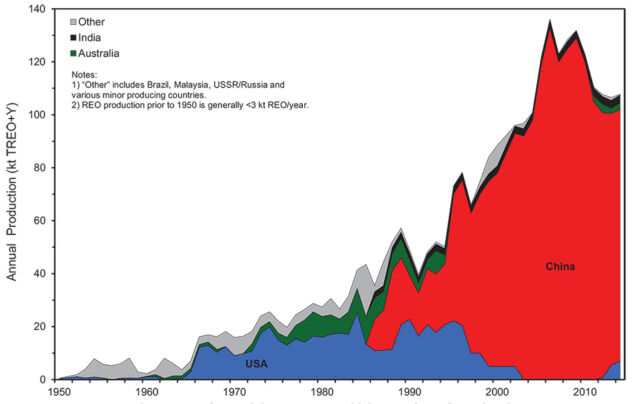 The Chinese were more than happy to begin filling the void left by U.S. rare earth mining. As production from Mountain Pass fell due to the new thorium regulations, Chinese production picked up the slack.

By the 1990s, production of rare earth elements from Mountain Pass would recover some. But a 1997 toxic spill would ultimately put an end to mining at Mountain Pass for two decades. In the spring of that year, 300,000 gallons of toxic waste containing thorium spilled onto protected land in the Mojave Desert. It was a downward spiral for the Mountain Pass mine after that. And for the next two decades, China would almost completely dominate the market.

In 2020, production at the Mountain Pass Mine was resumed by owner/operator MP Materials (NYSE: MP). And last year, the mine supplied over 15% of the world's rare earth production. Nevertheless, China still dominates the rare earth market.

Trade disputes and, more recently, supply chain disruptions from COVID-19 have caused prices of rare earth elements to skyrocket. Prices for praseodymium, a metal used to make speakers, have doubled in the past 12 months. Meanwhile rare earth products like neodymium and holmium oxides, both used to make magnets, have jumped 21% and 50%, respectively, for the year.

So it's no wonder that Apple stopped including wall chargers and headphones. The materials needed to make them are becoming more scarce and expensive.

Apple announced last year also that new iPhones will use 100% recycled magnets. Lisa Jackson, Apple's vice president of Environment, Policy and Social Initiatives, said last year, "Many of iPhone 12's environmental features build on our past progress in removing harmful chemicals and using renewable and recyclable materials. And now, for the first time, we are using 100% recycled rare earth elements in all magnets, including the camera, haptics, and MagSafe."

Going forward, many other electronics manufacturers may follow suit.

Will your next smartwatch, game console, or electronic doodad have fewer features?

Will the wall charger for your next laptop be sold separately?

Will televisions be manufactured without built-in speakers?

Are retailers going to charge more for products that rely on rare earth elements?