“It ain’t what you don’t know that gets you into trouble. It’s what you know for sure that just ain’t so.”
— Mark Twain

Likely, you’re still trying to forget it… so my deepest apologies for peeling off an old scab.

It's hard to believe that over a decade ago, banks were collapsing, the White House was having situation room meetings, and the rest of us were watching our once lovely neighborhoods turn into Hoovervilles.

It could have been worse...

Lifelong bankers were literally jumping out of windows.

One study showed that more than 10,000 people ended their lives as a result of the economic crisis. I happen to believe that the number is far, far higher. It was a defenestration situation from which our collective psyche — or our financial system — have never quite recovered.

All this was happening very fast — too fast — while all of us were watching in abject horror as our retirement funds burned off 30% in value.

It was the single-worst economic disaster since the Great Depression.

And if you believe the man who called it, it could be happening again — but in a very different way...

The last crash started because government mortgage lenders Fannie Mae and Freddie Mac were sitting on over $3 trillion worth of mortgage credit. Many of these loans were “liar loans” with no reasonable possibility of actually getting paid.

Many of us were part of the reason, myself included.

I had just bought my first house that very year. Great timing! I remember being a bit shocked at just how easy it was...

My wife and I just filled out a couple of papers, gave some pay stubs (which at the time were nothing to brag about), and boom: we owned a $250,000 home. When I asked about the down payment, I actually heard the lender chuckle a little under his breath. We didn't have to give one.

After the crash, I wasn't surprised that everything was a house of cards, played by a deck of jokers. Smarter folks than I knew exactly what was happening far before buying a new house.

Dr. Michael Burry was one of those people. He's the man who predicted — and bet against — the massive subprime bubble. You may know him from "The Big Short." He was (flatteringly?) played by Christian Bale in the movie. 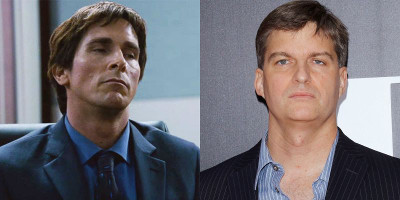 Now Burry is out with a brand-new prediction. But it doesn’t involve the government or the real estate market. It hit right at one of the safest investments out there.

And it is terrifying…

Burry thinks the next crisis is going to be massive. But he’s not talking about esoteric financial instruments like credit default swaps and collateralized debt obligations — he’s talking about one of the safest investments of the last few decades: ETFs.

He argues that the flood of cash into index funds since the great recession looks an awful lot like the 2008 bubble pop in collateralized debt obligations. The sheer amount of money that has flowed into ETFs has distorted what stocks are actually worth.

Most people think that ETFs are the best bet out there. But we've never seen an inflow of money into them like we have over the past 10 years.

"Like most bubbles, the longer it goes on, the worse the crash will be," Burry told Bloomberg.

“Passive investing has removed price discovery from the equity markets. The simple theses and the models that get people into sectors, factors, indexes, or ETFs and mutual funds mimicking those strategies — these do not require the security-level analysis that is required for true price discovery.

This is very much like the bubble in synthetic asset-backed CDOs before the Great Financial Crisis in that price-setting in that market was not done by fundamental security-level analysis, but by massive capital flows based on Nobel-approved models of risk that proved to be untrue.”

During the bull market, it was easy to push stocks into these funds, and the managers could simply point to the stock market performance. Once that goes away, the true face of those stocks will rear its ugly head.

Burry explains it more thoroughly in his most recent interview with Bloomberg:

"The dirty secret of passive index funds — whether open- end, closed-end, or ETF — is the distribution of daily dollar value traded among the securities within the indexes they mimic. In the Russell 2000 Index, for instance, the vast majority of stocks are lower volume, lower value-traded stocks. Today I counted 1,049 stocks that traded less than $5 million in value during the day. That is over half, and almost half of those — 456 stocks — traded less than $1 million during the day. Yet through indexation and passive investing, hundreds of billions are linked to stocks like this. The S&P 500 is no different — the index contains the world’s largest stocks, but still, 266 stocks — over half — traded under $150 million today."

"That sounds like a lot, but trillions of dollars in assets globally are indexed to these stocks. The theater keeps getting more crowded, but the exit door is the same as it always was."

So what is Burry invested in today?

That's one reason he likes small-cap value stocks: they tend to be underrepresented in index funds, or left out entirely.

But more importantly, Burry has focused much of his attention on investing in gold, water, and farmland — you know, things that people can actually understand.

“I believe that agricultural land — productive agricultural land, with water on site — will be very valuable in the future. I’ve put a good amount of money into that. I’m investing in alternative investments as well as stocks.”

How much of your portfolio is in land?

“I don’t want to disclosure that, but it’s a significant amount.”

“There’s an awful lot of people out there trying to buy these distressed properties right now. You need to find special situations. That’s how I’ve always invested: I’m looking for special and unique ideas. In the physical market you can get some pretty good deals.”

“Other than gold, I haven’t bought into any other thesis."

My colleague Nick Hodge has been crowing about this for years. He's bought land, he's bought gold, and he's bought small-cap stocks. I would be remiss if I didn't say that I should have listened to him more closely over the past few years.

He has uncovered some high-value small-caps in gold right now. You could play land, gold, and small-caps all in one fell swoop.

By the way, the DOW dropped 490 points yesterday...

So while the rest of the country waits with bated breath for the next collapse, you can join the guys who have been following this very scenario for the better part of a decade.

I would go right to the source, before you fall victim to the next "Big Short"...

Gold’s Multiplying Effect Is Back In Play
Now is the time to get in on the best miners. Mr. Market is handing investors a great way to profit and the trend has long legs. Outsider Club editor Adam English sheds some light on the gold sector...
Your Last Opportunity Ever to Invest Before the Final Gold Bull Market Begins
Discover five catalysts to launch gold stocks 371%, 322%, even 489% in just a few months
Investing in Marijuana Without Getting Burned
The marijuana industry has rewarded scores of investors with life-changing gains.