I Left My Heart in San Francisco

I stood watching in abject horror as a man dropped his pants in the street and began shitting himself.

My colleagues and I were in downtown San Francisco to give presentations at a global investment conference, and we simply wanted to grab a sandwich and a coffee in between our speeches. Now, having our headquarters in Baltimore, I was quite used to scatological behavior. I plan on writing a book at some point about all the things I’ve witnessed in regards to the needy and hopeless.

I feel for them and do my best to help them. (I also witnessed a man punching himself in the face like he was Muhammad Ali, and I approached him to offer help when I quickly realized I may be the Sonny Liston in that situation.)

San Francisco was a totally different level of indigence. The man proceeded to continue screaming and shitting and screaming again. There were crowds of women and children trying to enjoy their own trips to San Francisco, now shielding their eyes from the maniac who had made quite a scene in the middle of what they call the “financial district.”

It’s also a stone’s throw from “Silicon Valley” — for years the global center of technology and innovation.

Now, Silicon Valley is one of the richest areas in America. The average household income is more than $500,000 in some communities. I know people personally that were paying almost $3,000 to basically rent a closet in a tiny apartment just for the opportunity to work at a startup tech firm.

But that is all changing. It’s been called a “mass tech exodus.” Since 2017, more people have been leaving Silicon Valley than coming in...

Austin, Texas, is the landing spot for many of them, and I can’t blame them. Austin is perhaps the coolest city that I’ve been to in the U.S. (If you go, try the underrated honky-tonk the White Horse for serious line dancing.) The arts and culture are at the top of the heap. But the important point here is that Silicon Valley has not only insane real estate prices, but also a massive personal income tax rate, while Texas has none.

Why not make the trip east?

A brief primer: Silicon is dying. Silicon-based microprocessors can’t become much faster than they are today. As you can see in this chart, performance has hardly increased since 2016: 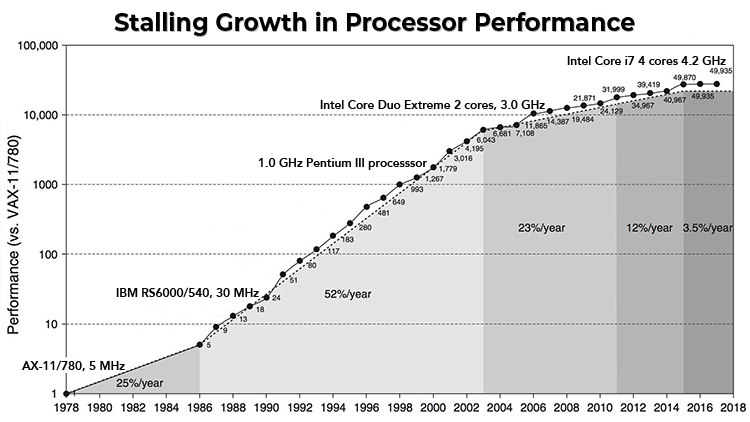 It’s the end of an era. We need more power than silicon alone can provide. The demand for additional computing power is skyrocketing.

An additional 1.4 billion internet users will be coming online by 2023. That means more than four times the entire population of the U.S. will get access to the internet soon. And the number of connected internet devices is about to soar too. It will surpass the global population by a factor of three.

The reason why silicon allows for no additional growth is simple: It's impossible to scale down transistors any further. Transistors on the latest generation of microprocessors are as tiny as 5 nanometers. That’s the size of about 10 silicon atoms.

That's about 1,600 times smaller than a human red blood cell.

Circuitry below these dimensions starts to behave erratically. To put it as unscientifically as possible, electrons leak out of the wires. Silicon doesn’t provide enough insulation to prevent this leakage. None of the semiconductor companies based in Silicon Valley offer a way out of this dead end.

But one company operating outside of Silicon Valley has developed — with the help of MIT and DARPA — what I’m calling the “God Chip.” It's 10 times faster, consumes less energy, is more environmentally friendly, and puts off less heat than any silicon-based chip.

It's literally upending everything we know about computing.

I uncovered the unknown company that actually worked with MIT to develop this technology. You'll want to find out about it before everyone else does.

You can do so in my new report.