Today we're bringing you something new — a weekly sneak peek at what our editors are writing for their paid subscribers.

First up is the introduction to Nick Hodge's September issue of Wall Street Underground Profits.

It highlighted two new gold recommendations, one of which is up slightly while the other is up over 12% already. The positions are only a couple weeks old and it is still a great time to get in on them.

It’s all about gold.

When you received the August issue last month, I told you that the next leg up for gold would take it to $1,550. 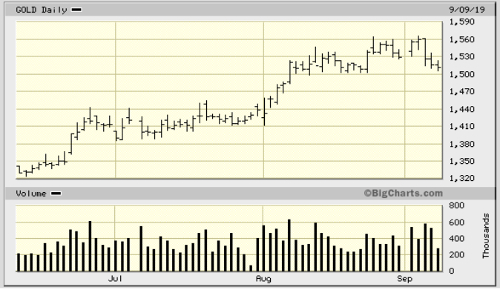 It surged to that level over August, and is in the midst of a textbook pullback as I write.

Markets continue to be in flux as the western world drags itself back to school and work post-summer.

The faster those traders get back to their desks (as they say) the quicker they can realize Europe and Japan are in trouble and the Fed is the only one left with any sort of tools to combat still-slow economic growth that never recovered from 2008.

Add in some additional rate cut(s) and quantitative easing later this year from Mr. Powell, and the stage is set for new highs in gold and U.S. stocks — but only in the short term for the latter. Debt levels, interest rates, and stubborn recessionary cycles means days are numbered for stocks.

No one knows how numbered, of course. But here are some of the major points and ideas that need to factor into your thinking:

That’s all numbers-based market stuff. I love anecdotal evidence as well. And anecdotally, the big money is clamming up.

Last month saw the failed auction of a 1939 Porsche Type 64 after the winning $17 million bid wasn’t high enough to meet the “reserve price.” Bloomberg has also reported that demand for cars costing more than $1 million “collapsed at the 2019 Monterey Car Week” held in August.

If the richest among us can’t buy classic cars... imagine how the rest of the world is feeling.

To get more insights and full issues from Nick, as well as see his #1 gold pick right now, check out this Wall Street's Underground Profits Special Presentation.